All Credit to KCRMA! Genesis of Chicago Aug.10 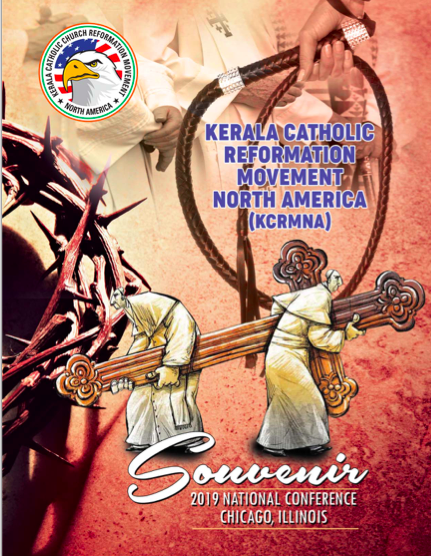 A very respectable person in the Middle East wrote to me asking: “For whom / on what occasion was your conference?” and your keynote speech held in Chicago on Aug.10th. He got the impression, it was held to honor this “KNOW-NOTHING”. Nothing could have  been far from the truth or more stupid! I happened to get into it by sheer MISTAKE!, like Simon of Siren dragged in to carry Jesus’ cross!

Chicago 10th meeting was the child of KCRM (Kerala Church Reform Movement) started may years ago in Kerala. When so many Keralites migrated to USA and Canada, first they built the Cathedral Church in Chicago, then other churches in different States in US and spread also to Canada. Wherever  the wheat was sworn the weeds also grew among the people of God, clergy and laity. It was a repeat of the story of the prodigal sons and daughters in foreign land doing what pleases them and not the Lord.

So KCRM, originally meant for Kerala only had to migrate to USA and start KCRMA, with an additional ‘A’ to mark it out as dealing with the American Branch. It is many years since  KCRMA was functioning unofficially in USA.

But let me first clarify the confustion about the August 10th meet. Agnes and myself came to Chicago  on June 26 totally unaware of the Chicago meet,  but merely to fulfill the ritual of visiting US once a year not to get the Green card cancelled. In fact I did not want to come and had almost ordered my daughter to get my green card cancelled. Since she and others pleaded not to cancel it immediately,  I agreed to come this years also for other reasons as well.

Only two weeks after my coming I was told KCRMA was holding their first meeting in Chicago on Aug. 10 and asked if I would be staying till then. Then one of the organizers, Jose Kallidukil, Vice president, asked me: “Why don’t you give a speech?” and I refused to be drawn in. Later when the program for the meet was worked out he categorically told me: “You give the Keynote speech” though I didn’t know even what a “Keynote speech” is all about, but had to agree due ti his insistence.

So I  just wrote down that speech to make it clear to me in the first place, what such a speech should honestly be for the first gathering of KCRMA  in Chicago, and I just presented it after all corrections and modification. Now It looks, what was an accidental happening, has been made to appear  as  the central  topic and theme of the meet — literally  and typically an example of making a MOUNTAIN out of a mole hill.

Honoring anyone with Ponnada was not at all anyone of the agenda of the meet. But action to be taken for reforming the Syromalabar Church in USA was.  To fill in the items for the whole day – from 10 am to 7 PM some smart guy, I don't name him, suggested the name of crazy kottoor (may be since he is controversial) to honor him with Ponnada. Other names came up after a week or so later. So I didn't absolutely  have any part in organizing the Chicago meet or its agenda. My son even wrote saying I got a lottery, thanks to Santhichehci (his sister) and due to her pressure I went to Chicago.

So my apologies to all if Chicago meet was presented in a distorted way as though to honor some insignificant guy like myself. It was not. There were many other speeches and discussions on Church act bill, exploitation of Sisters like Lucy and  other discussion led by Kalarickal, the President and Kalliduckil, the vice president.

On Aug.25, 2017, Chackochan Kalarical and Jose Kallidukkil conducted and teleconference to find ways to introduce Keral’s   KCRM in US. For that purpose  they decided to concduct a meeting in Chicago on Sept.30, 2017 where they started a new organization called: Catholic Church Reformation Movement North America (KCRMA).

For its continued work Sri Chackochan  Kalarical was elected as the Coordinator and 15 others from US and Canada; they decided to conduct telephone conference on the second Wednesday at 9 pm with A C George, living in Huston,  as Moderator. Besides a bylaw for the organization was worked out and got it registered as a Nonprofit Corporation in Florida on Nov.18, 2018 with 5 persons as board of directors: President: Chackochan Kalarical, Vice President: Jose Kalliuckil, Secretary: James Kureekatiil, Joint Secretary: Binu Alex,and  Treasurer: George Neduvail. The Chicago meet of August 10th was the first national  meet decided by this Corporation.

According to President Chackochan Kalarickal, whatever people may say, we in the KCRMA are all  links of a steel chain called CHURCH REFORM tying the floundering and drowning Bark of Peter, closer and closer to its CAPTAIN, JESUS, to Him alone and none other. We are not Satan’s battalion or an army of empire builders. We are prophetic followers of Naman who say fearlessly with accusing finger: “That man is You”, or like Jesus himself speaking from house tops accusing  thieves, robbers, exploiters of women and makers of holy sisters prostitutes.

We don’t go round stealing petty cash that fall in the begging bawls of squatting cripples to build Edappally like imposing churches. We are fearless proclaimers of TRUTH alone at any cost. We are not preachers of Prosperity Gospel to empty the pockets of the beggars left with only the widow’s mite left in their pockets.