A time of Christmas without Christians – SANJAY SRIVASTAVA (The Hindu) 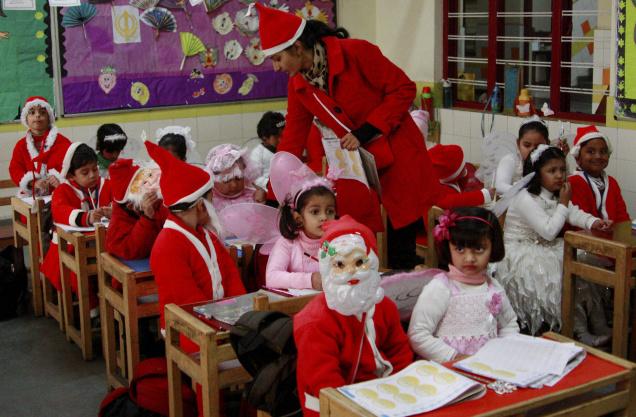 "The manner in which Christmas has come to belong to all of us is not without consequences for a multi-religious society." Picture shows students dressed as Santa Claus ahead of Christmas day celebrations in Gurgaon.

A religious festival signifies something more than the consumption of commodities; it is meant to remind us of the different kinds of people in society

In New Gurgaon, where I live, Christmas is a very significant affair. This Christmas too, you might have been forgiven for thinking that significant sections of an electorate that voted for the Bharatiya Janata Party suddenly converted to Christianity. All over Gurgaon, Resident’s Welfare Associations organised Christmas fairs where children sang carols, santas gave away gifts, and people of all ages, dressed in red caps, exchanged Christmas greetings. Gurgaon’s Christmas is, of course, now a national event and my description could be applied to December 25 goings-on in a number of cities across India. However, when I rang a friend in Kerala to wish him “Merry Christmas,” he responded that someone else had rung him earlier in the morning, saying he was calling to greet him on what might be the last Christmas in India. Though said in jest (and in reference to recent anti-Christian violence), this comment sits oddly with what appears to be uninhibited and large-scale participation of non-Christian populations in Christmas celebrations. Or, does it? Is it possible that we might have, in fact, come to prefer Christmas without Christians? The manner in which Christmas has come to belong to all of us is not without consequences for a multi-religious society.

When I was small, Christmas was a day that belonged to a specific community. It was, in many cities of North India, referred to as bada din ( big day). “Bada Din Mubarak!” was the term I was taught to use as a greeting, if i came across any Christian on December 25. I don’t think I came across many and hence the greeting remained a pedagogic contrivance rather than customary practice. But what it did teach me, not in a self-conscious ‘secular’ manner but as part of casual, everyday life, was that a specific religious day and a specific religious community were intertwined and legitimate aspects of Indian life. As a child, because Christmas was not my festival, I and several others around me recognised it as a festival that belonged to another community, that was as real and legitimate as mine. In my imagination, Christmas was celebrated by real flesh and blood people who constituted actual communities. Their bada dinsignified something as valuable as the festivals that I took part in. Hindus and Christians existed as well-defined communities, but not hostile ones. That community was real to me precisely because Christmas and Christianity mapped on to each other.

In recent times, when Hindus have started to celebrate Christmas as their own, we have moved into an era where a festival of legitimate difference has transformed into one of a ritual of leisure and lifestyle. It becomes contiguous with taking a foreign holiday or buying a fridge. It need not remind us any longer of the legitimacy of the community for whom Christmas is something more than a ‘shopping mall festival’ but a fundamental way of defining community life. Celebrating the customs and rituals of another community is not itself a bad thing. However, in this case it appears that when Christmas becomes “our” festival, it ironically weakens the ability to recognise, respect and champion difference. The “mainstreaming” of Christmas sits alongside a growing indifference towards Christians: it is almost as if we can do it as well as them and don’t really need them. It, peculiarly enough, signifies a time of Christmas without Christians.

The invention of Christmas as a shopping festival has a long history in the West, particularly in the context of late 19th century Britain. The more recent replication of this process in India is intimately tied to shifts in political and consumer cultures. It does, however, have a parallel in the 20th century’s manufacture of yoga as a lifestyle activity in the West, largely shorn of its philosophical bearings. The spread of yoga in the West did not lead to greater tolerance of Indians and the popularity of Christmas in India has little to do with an acceptance of religious differences. Indeed, it is the context of something quite the opposite: the symbolic production and consumption of different ways of being through consumerism that exists side-by-side with the actual suppression of difference. So, while we consume Christmas cake, we don’t seem very bothered by arson in churches. We have begun to prefer pre-packaged difference.

“Celebrating the rituals of another community is not a bad thing, but when Christmas becomes 'our' festival, it weakens the ability to recognise, and respect difference”

It is an odd situation, then, and quite different from when I was a child. Earlier, Christmas was not a festival of the Hindus but Christians were not identified as an enemy community. It was not a utopia of communal harmony but certainly different. Now, however, Christmas finds vigorous acceptance among the majority community — words can hardly convey the earnestness with which the children of my locality sing “Silent Night” — but there are hardly any mainstream murmurs (let alone roars) of protest against anti-Christian sentiments and practices. I don’t ever remember singing “Silent Night” and may have waited in vain to ambush a passing Christian (or anyone else) with a bada din greeting, but I also do not recall church burning and ‘ghar vapsi’ as normalised activities.

What is at stake is something much more fundamental than the tiring invocation of ‘secularism’ versus ‘fundamentalism.’ These categories may not be adequate to understand a present where some sections of the majority community adopt minority rituals but rejects minorities. When we become ‘shopping mall Christians’ — the Christmas celebration in my locality ended with an RWA-sponsored tambola — we forget that a religious festival signifies something more than the consumption of different commodities; it is meant to remind us of the different kinds of people in society. The current upsurge in Christmas celebrations appears, dangerously, to encourage the sense that it is our right to celebrate Christianity’s key event on one day of the year, without taking any responsibility for what happens to its adherents on the other days when we move on to some other form of consumption.