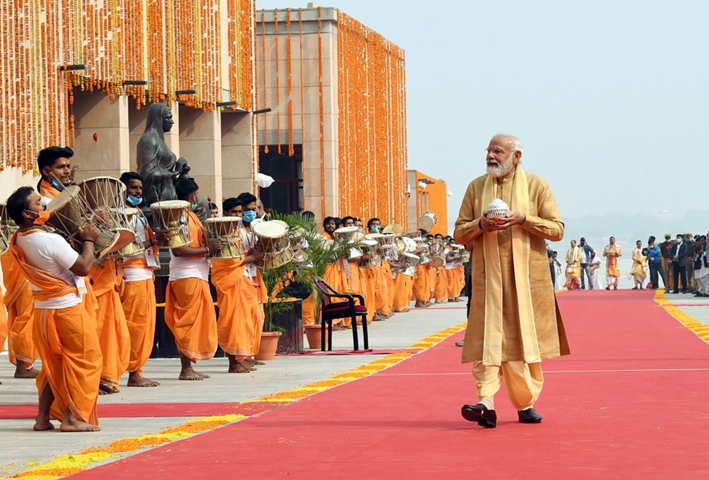 Rajmohan Gandhi is asking: “Is Modiji putting up a spectacular religious show at Varnasi, to divert public attension from the tragic defeat he sufferd from Farmers’ one year old strike at which nearly 1000 died? Countering a shameful political defeat with a Religious show, himself performing himself as a Pujari? Downright shameful!

India is a secular democracy where “Religion & politics” don’t mix in public square! India’s majority religion, Hindus and minority religions, Muslims, Christians, Siks, Budhists etc., are fully aware of it! Hindutva, started by Advani, and now promoted by BJP,RSS & Sanghparivar, can never succeed to turn India into a religious  Islamic country like Pakistan! At the forefront of this fight is Kerala, the most litterate state in India!

Let us hope and that our ruling dispensation understands this basic truth! james kottoor, editor, WCV.

Prime Minister Narendra Modi at the inauguration of Kashi-Vishwanath Dham

Will Modi overcome his defeat at the hands of the farmers by staging spectacular shows like the one he just put up at Varanasi? His showmanship is not in doubt, and his skills with costume, make-up, scenery, lights, sound and camera are of a high order. Moreover, what he is marketing through his shows can seem extremely attractive.

To Hindus rich and poor, Modi is selling the drug of supremacy. "No matter how hard or risky your life may have become, Muslims and Christians will cower before you if you take this drug. Even if you are hungry or unemployed, you will finally be on top!" Modi doesn't need to spell out this message, vigilante squads will yell it out as they chase helpless Muslims and Christians in BJP-run states. From Modi himself, signals suffice.

Rahul Gandhi cannot create a stage like Varanasi. He is not even officially the President of his party, and that party is nowhere close to where it used to be. Yet, what he said in Jaipur were the words of a fighter. Drawing a sharp contrast between Hinduism and Hindutva, between a Hindu respectful of fellow citizens and a "Hindutva-wadi" who coerces or roughs up compatriots of another religion, Gandhi revealed himself as a man concerned with the good name of two vast entities that are distinct but closely connected: Hinduism and India.

While a coercive "Hindutva-wadi" acts like a bully and is hungry for power, a Hindu, said Gandhi, is hungry for the truth. Whether astute or not, whether politically correct or not, Gandhi's words were not only legitimate, they were absolutely necessary. Has anyone forgotten the cries that went up across the world – understandable and appropriate cries – for courageous Muslim voices that would denounce extremism and terrorism carried out in Islam's name? The need today for Hindu voices that denounce coercion exercised by Hindus is not less pressing.

Disturbing scenes and reports hit us several times a day. A stand-up comedian coerced into not performing. Citizens in Gurugram coerced into not praying. Priests and nuns charged with "illegal conversion" because they had made passages from the Bible available to be read by others!

This is the very antithesis of Hinduism, which, from the Vedic age, sought noble thoughts from every direction and saw God in every human being, and it requires to be challenged. It is also the antithesis of democracy, but perhaps intimidation comes naturally to those who think they're Vishwagurus.

Also undemocratic, and totally unconstitutional, is the turning of a temple event such as the one in Varanasi into a state ceremonial. This lavish merger, at the taxpayer's expense, of religion and politics (and a merger that highlighted one individual) should certainly be seen as a cheeky if also confident step towards a religious state. That conspicuous or quiet steps of this kind do not usually invite intervention from courts, or protests from most of the media, is part of our troubling reality.

Fortunately, India's farmers have displayed another magnificent reality, which is that Indians will fight with astounding tenacity and stamina when their right to be consulted is snatched from them and their survival is threatened by suddenly-imposed schemes. Every weapon was used against the farmers: spikes, other barriers, the bitter cold, the scorching sun, allegations of foreign sponsorship, taunts and insults, divide-and-rule, the lethal force of moving vehicles, and more. Nothing worked. Sustained by the example given 90 years ago by martyr-heroes unfazed by the hangman's noose, our Sikh, Hindu and Muslim farmers unitedly compelled a proud and powerful government to yield.

Something else happened in the last couple of days: the extraordinary and possibly record-breaking numbers of viewings of NDTV's Ravish Kumar's visit to the Ghazipur border in East Delhi to meet the farmers as they were finally pulling out in triumph. A brave struggle captures the Indian people. Supremacy is not the only thing that sells. We had seen the truth of this months ago, in May, when a lone Bangla woman defeated a juggernaut commanded by Modi and Shah.

The melodramatic scenes freshly offered to India's Hindus from Kashi cannot hide the pragmatic fact that requests have gone out to five Muslim presidents of Central Asian states to the north of us to be chief guests on Republic Day. It is not easy to know how much of India's news reaches the preponderantly Muslim populations of these countries, where rulers are not famed for their commitment to democracy. But we are well into the 21st century now, when "ordinary" people anywhere seem able to know what is happening elsewhere. Hindu supremacy in India is not likely to appeal to Central Asian nations, or to the people of Iran, Saudi Arabia and the Gulf countries, where, too, India needs goodwill.

With these and other contradictions, Project Supremacy is bound to collapse in the long run. Democracy, equality, and mutual respect are probably better suited to humanity's health and inclinations. A more immediate question, however, is about the results that state elections due in U.P., Punjab, Uttarakhand, Goa and Manipur in the first quarter of 2022 may throw up. The BJP does not appear to be in a position to repeat the electoral (or post-electoral) successes it managed in 2017 in four of these five states. It lost badly in Punjab and seems unlikely to do much better there this time, even with seat-sharing support from Captain Amarinder Singh. In U.P., will Akhilesh Yadav convert the crowds he is getting into votes? There and elsewhere, will the parties that stand for equality fight one another rather than the BJP?

Those are questions for pundits or astrologers. For the rest of us, for responsible citizens of India, and especially perhaps for a judge, police officer, civil servant, teacher, and journalist, there is a more pertinent question: "Where do I stand when the choice is between coercing fellow Indians and respecting their freedom and dignity?  (Rajmohan Gandhi is presently teaching at the University of Illinois at Urbana-Champaign.)214CommentsDisclaimer: The opinions expressed within this article are the personal opinions of the author. The facts and opinions appearing in the article do not reflect the views of NDTV and NDTV does not assume any responsibility or liability for the same.