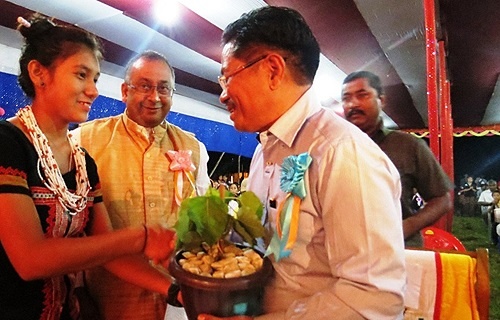 Bishop George Pallipparambil (center), looks on as a government official is presented with a sapling. Credit: Diocese of Miao.

By Antonio Anup Gonsalves. Miao, India, Nov 5, 2013 / 04:27 am (CNA).- The Diocese of Miao, located in far north-east India, is promoting stewardship of the environment by choosing to give saplings to guests at its events rather than the customary floral arrangements.

“We have decided to offer a sapling to the chief guests of any of our programmes instead of flower bouquets,” Bishop George Pallipparambil of Miao said, according to an Oct. 23 release from the diocese.

The first instance of the Miao diocese's new program was at its first annual Inter-School Cultural Fest Radiance 2013, held in the town of Roing Oct. 20-22, where a sapling was given to an official from the government of Arunachal Pradesh state.

The Miao diocese is located in Arunachal Pradesh, the north-easternmost state in India, part of which is claimed by China. The diocese borders both China and Burma.

The area is mountainous, home to the easternmost portions of the Himalayas. It also receives heavy rainfall, and is home to verdant forests; Arunachal Pradesh is called India's “orchid state” and “paradise of the botanists.”

It is a local tradition to welcome guests with floral garlands or bouquets, but exhaustive deforestation has become a threat to the region's flora and fauna. Many of the inhabitants, including the majority of Catholics, belong to tribes whose livelihood has been based on the forests, providing food, shelter, and resources for artisans and craftsmen.

Out of concern for the environmental threats to the forests near Miao, Bishop Pallipparambil considered the Church's social teaching that we are called to be custodians of God's creation, and saw it as a way to protect the land's rich biodiversity.

Giving sapling trees to guests, rather than floral arrangements, will both preserve the area's flowers and promote the planting of more trees.

At Radiance 2013, Newlai Tingkhatra, a minister of the state, was given a sapling, and he expressed his great happiness with the green initiative, asking that all Arunachal Pradeshis preserve and plant trees.

Radiance 2013 gathered nearly 450 students from the Miao diocese's 14 schools to highlight students' talents in the arts, competing in such areas as singing, folk dances, traditional dress, biblical skits, and drawing.

State minister for minority affairs, Ninong Ering, attended the events and said Radiance is “a noble concept that will help these tribal children from interior villages to share their culture with each other.”

Arunachal Pradesh is home to more than 100 distinct tribes; the state's remote and mountainous terrain has led to challenges of poverty, underemployment, and a lack of infrastructure for its people.

The festival of inter-cultural dialogue was hosted by the Miao' diocese’s educational department, the Newman Educational Society. Ering quoted the department's patron, saying that “this experience of sharing and learning from each other will help these children to 'kindle a flame where it is dark', making a difference in society.”

Bishop Pallipparambil stated that the festival is meant to “give a platform to our students every year to express themselves, and to exhibit their hidden talents” from God.

One of the participants, Puja Wangsu, said, “I feel so happy to meet many new friends from faraway places. Though we competed with one another, off the stage we were like great friends.”

The Miao diocese was established in 2005, and Bishop Pallipparambil, a member of the Salesians of St. Don Bosco, is its first bishop. The diocese is home to 83,500 Catholics across an area of nearly 17,000 square miles.

Its people are served by 33 parishes and missions, staffed by 27 diocesan priests, and 60 religious. Several groups of religious sisters live and work in the diocese, including the Missionaries of Charity.

The diocese's total population is roughly 500,000, with Christians – most of them Catholic – comprising some 19 percent of the population. The largest religious group is Hindus, with large minorities of Buddhists and traditional religions, as well as small numbers of Muslims, Sikhs, and Jains.