How can Preachers Listen? Pope Francis is asking the US bishops to listen to people. Will they? 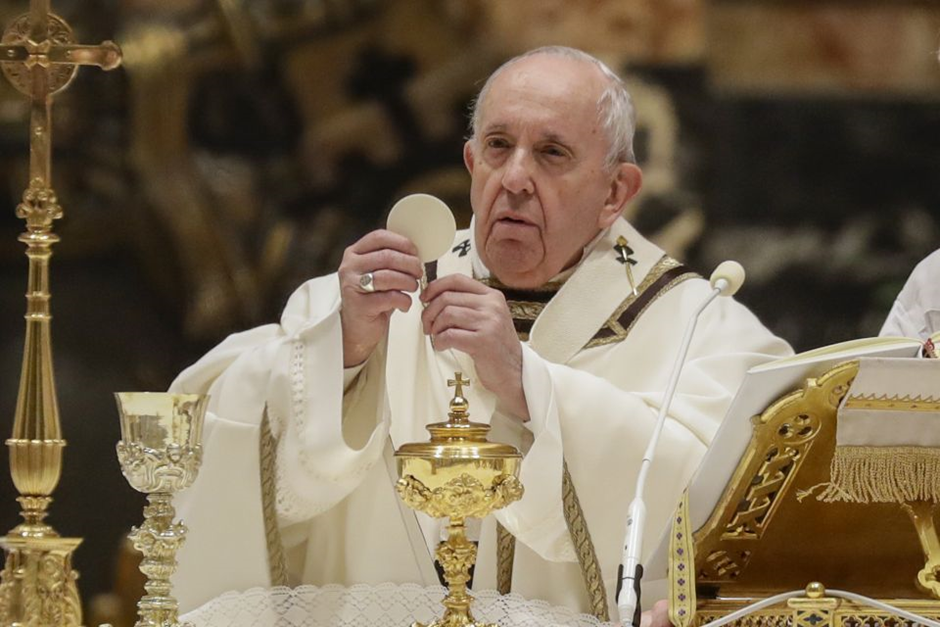 In this Feb. 2, 2021 file photo, Pope Francis celebrates a Mass with members of religious institutions in St. Peter's Basilica at the Vatican. (AP Photo/Andrew Medichini, pool)

It is too little to say: ‘I love Pope Francis!’ Truth is: “He is the most adorable for me, among Popes,” after John xxiii, widely known as ‘Good Pope’, being a Pope watcher from Pius xii!

Why? Because, I can’t recall any Pope in history who described himself: ‘I am a Sinner!’ not once, many times! One who humbles himself to the lowest has to get exalted to the highest!

I am journalist ‘by mistake’, (mistake of saintly Archbishop Luis Mathias, French, of then Madras Archdiocese) Never, dreamt of becoming a writer, least of all a journalist, wanted only to become a Missionary in far off Assam among poor tribels!

Shock of my Life!

While appointed to teach minor Seminarians in San Thome, Mylapore – even before completing even one month – I get a call from my Archbishop: ‘Come to see me this Friday, I have something to tell you – all suspense!

Substance of what he said to be brief: “You have to go to Rome to study Journalism. I have seen some your writings in the Seminary magazine, you will make a good editor of ‘the New Leader’ (100 year old weekly of the diocese,) See Fr. Thomas Joseph who will arrange the ship journey, Cocin to Rome!” More than what I could understand or digest!

The conversation itself was rather long, first time alone with a great Archbishop, and me a puny creature too diffident, asking questions & raising doubts all of which he answered! In another month I had to sail from Kochi, all at sea for two weeks to reach Rome! All the Heavens’ doing, not of this:knownothing!

Bishops up in the clouds!

Now something on Bishops who don’t listen to people, as the article below is about them! Starting as editor of NL on All Fools’ day, (An April 1st, chosen purposely, because all were forcing me to take up Editorship, immediately after my return from abroad after studies, while I, being cowardly & diffident, wanted to work under the saintly reigning Editor for few months.)

One of my Big question of conscience was I couldn’t digest the heavenly appellations of bishops & Pope “Your Holiness” (for me: ‘Exemplar par example of Blasphemy!) But how can a young editor with the NL motto: “The whole Truth in all charity”(Veritatem facientes in caritate) say it? And I had to be very honest, no compromising on Truth!

I was very very respectful of all Popes, I had not read the stories of bad Popes! More over I had returned from Rome after burying “Good Pope John xxiii & crowning Pope Paul VI, had also a photo with him. But still I managed to write: Your Holiness = Blasphemy!

But a very dear Cardinal Parecattil told me  during “Church in India Semnar”, he was walking in opposite direction to me, he stopped seeing me, smiled at me  fondly and told me loud  for enough for by standers to hear: “You are too Young to be editor of New Leader!” Then I was too young, my fault? Not now too old!

NCR, as it is known,  Kansas, US, is the top Catholic weekly there, it was started during Vatican ii, I had opportunity to visit it while studding journalism at Marquette.  I still follow it! Hence this article from it.

It’s view on bishops in US is given below. They at least speak out! Indian bishops keep their mouth shut to join the winning side! Once upon a time I wrote gloriously about my friend cardinal Alanchery, now drowned in half a dozen land deeds, still parading himself in royal regalia deaf to all rotten things published in Catholic & secular media, so are bishop Franko & Bp. of Mysore with sex scandals. I have given up on the whole lot of them. This is not to deny there stray exemplary bishops!

Organised religions should be wiped out for peace in the world, is my view. They are ireformable! Pope Francic said, there is no hell! Is there Purgatory? There it is for the whole world to see! It is STOMACH of the clergy! As teenager, I used to hear it said by my elders!

All the sacraments are the costly sacred selling items for the upkeep of the Clergy! The Communion debate in US will also be gone for good! Why don’t we hear, it is for the SICK to make them healthy, not for the perfect? In any case Francis denies it to none!

So I guess the prolonged debate on communion to abortion supporters, especially to Biden will also die down soon like a tempest in a tea cup! In any case killing a  human is thousand times more vile than an unborn. It is still  disputed when a foetus become human. So let the US bishops take care of gun control to save the living! james kottoor editor WCV

Everybody likes Pope Francis. Except, it seems, U.S. Catholic bishops.

On the other hand, no one seems to like the bishops — they damaged their own credibility with their 2002 “Dallas Charter” on clerical sex abuse, which sanctioned only priests and deacons but left bishops alone.

It was former Cardinal Theodore McCarrick, known then, as now, for his own predatory acts, who suggested eliminating bishops from the document. Once again, today, the U.S. Conference of Catholic Bishops seems bereft of common sense.

Forget the worldwide Synod on Synodality, a listening exercise ordered by Francis, who wants to hear from Catholics and non-Catholics alike about how the church can move forward in the current century. Many American bishops are content to ignore it: Only half of the U.S. bishops have even named someone to run the synod project in their dioceses.

That is, half of the U.S. bishops are not interested in what the people of God think.

At its fall meeting last month, the U.S. Conference of Catholic Bishops approved a $28 million budget for a "Eucharistic Congress" in Indianapolis in the middle of July 2024. There is no published U.S. bishops' conference synod budget.

But it is about more than just the money. The Eucharistic Congress is about what priests and bishops control: the sacraments.

Yet the church belongs to its people. Everybody knows that only a priest or bishop can preside at Mass, but the word "liturgy" literally means "people's work." And this is the heart of the tension between the U.S. bishops' conference and Francis: whether the Eucharist belongs to the priest or to the people.

Eight years ago, Francis wrote that access to Communion is not a "prize for the perfect but a powerful medicine and nourishment for the weak."

To see how this tension is working out, consider the U.S. bishops' quandary over President Joe Biden. Just as he was moving into the White House early this year, the U.S. bishops' president, Los Angeles Archbishop José Gomez, formed a working committee to deal with the reality that the United States had a Roman Catholic president who went to Mass and received Communion. The problem: Biden supported the Democratic Party's platform, which in turn supported the laws enabling abortion.

The bishops' solution was to commission a document last June on "eucharistic coherence," aimed at shooing Biden away from the Communion rail. By November's meeting, they approved a tepid document that neither names the president nor has Vatican approval.

Francis' gentle advice seems to be: try to work with the Catholic president you have and stop wishing for the non-Catholic former president you do not have. Which is the crux of the matter.

More than a few bishops openly support former-President Donald Trump because of one Republican policy: abortion. Nevermind Catholic social teaching or care for the environment or aiding the poor or even protecting immigrants and vulnerable people. Abortion, it seems, outweighs each of these, although programs that address poverty and provide social services can reduce abortions.

No one likes abortion. No one wants abortion. But the church's inability to move its membership to demand a legislative end to any public funding of abortion — if not to the practice itself — rests in its inability to convince the populace of the sacredness of human life.

Teaching that truth is within the purview of the bishops, but they have been supremely ineffective. And the bishops as a body still do not seem to understand how much Catholics and others distrust them in the wake of more accusations of abuse by clergy and coincidental cover up.

Vatican documents now address sex abuse by bishops, but a straight line connects the bishops' failures in responding to clerical sex abuse, their foundering attempts to change abortion law, their $28 million Indianapolis event and their lukewarm response to the Synod. The pope is asking them to listen to the people. Will they? Ever? (Phyllis Zagano is senior research associate-in-residence and adjunct professor of religion at Hofstra University, in Hempstead, New York. Her most recent book is Women: Icons of Christ.)