No, only calling is to become Human! Priestly/Religious Vocations Exist? 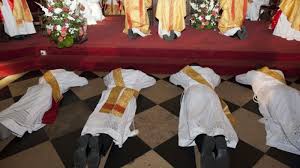 At the Fag-end of  my life on earth, I am convinced more & more, that no such distinctions exist but only ONE to be human – saint or sinner, rich or poor, learned or ignorant! That is why Pope says: “we are just brothers & sisters only!”

It is because of that mine happen to be a family in a team of 7, with two brothers & three sisters in Religious life! I used to describe my team  as 7 Capital vices, myself being the second(there are also 7 gifts of Holy Spirit). After I went to become priest my younger brother also wanted to become Priest. I told him not come to Chennai if his desire is to serve the poor & down trodden, & not get support from me!

So he opted to go to Vijayawada and built dozens of churches – prayer homes and one school to help the poor to study. In doing that he did much better missionary work than me for the poor, while I did nothing for the poor, although it was missionary zeal that prompted me to become a priest!

After him my three younger sisters studying in college, Palai, opted to join Assumtion Sisters, Paris, France, on promise to be brought back to India to work for the poor. They are now working in North India, one became their Indian provincial for two terms, another became a nurse homeo practioner in Philipines, now in Poona!

The last sister Philo was studying in college and  the family wanted her to be married but she was asking me to help her to become a sister in Chennai but I delayed hoping she would change her mind by the time she got graduated! She guessed that, so on her own applied to Patna Sisters to become a Sister in Assumption Congregation and they immediately accepted her being a graduate. She is now two-time Provincial in Bihar as their American-Indian Congregation!

How do these things happen? Man proposes and God disposes of! Is that what is happening?

After ordination I went home for a month’s vocation and came back to Chennai. Suddenly I got appointed to teach in Minor seminary, Mylapore! In another month I got a shoking order from my bishop to go to Rome to study Journalism to become editor of New Leader, unbelievable! Heard of any Indian bishop sending one of his priests to Rome to study Journalism? I haven’t heard of any! It happened to me! “God writes straight with crooked lines?”

Although my sisters were supposed to go by ship to Naples, and then to Paris, I went earlier by ship to Rome and was there at Naples to meet my sisters on their way to Paris! Later they would make their first profession to me,  when I had gone to Paris to attend their profession!

Just one more incident in my family! Usually children are much attached to their mother or father! In my  CASE, I was terribly, terribly attached to my Grand father & mother. Even today I look to them as my Prodigal Father & Mother waiting to meet me, and feel sorry I could not tell them so many endearing things I wanted to tell them when young!

I always saw my grandfather in 3 positions only – either working hard in Sun, sitting praying or sleeing being tired! He was & still is the Living symbol of God the Prodigal father waiting for my return & feel sorry I could not tell him so many endearing things I wanted to tell him when young!

He loved the whole world and helped all, kew all medicinal plants and bring them for those in need. He bought two Pulaya children, those old times named them Ouseph & Varky, brought them up like his own children, gave them 10 cents from his property to settle down!

So was my grandmother loving me and telling all biblical stories, I learned all Bible stories from her. She was from the family of present PJ Joseph, l learned nothing from Priests or Sunday school I rearlly attended! She was blind in her old age but still knew the exact  number of seminarians in Chennai I did not know. She made others to count from the photos I used to send from Seminary! I used to come home only once in 3 yeas. She had instilled in the desire to become a missionary to serve the poor!

I never felt the pinch of hunger in life, she made me feel that hunger in the poor and it is still very alive as in Pope Fracis, all thanks to providential happenings,not to any smartness in this Know-nothing! jameskottoor!