To Err is human, to correct, Divine! Too many VIP deaths, something amiss? 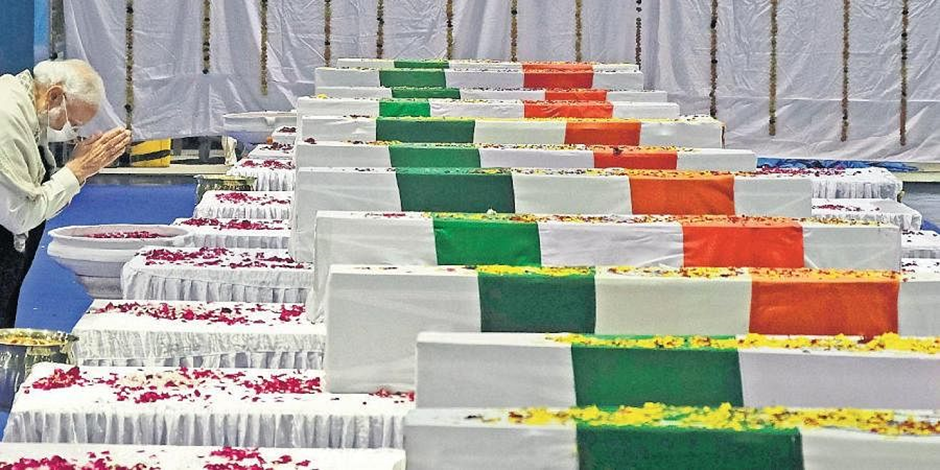 Security experts have practices and conventions based on what they have learned from experience.

Something radically wrong has gone in defending and protecting our defence personnel, ‘Primum vivere, secundum philosophare!’ Only when we are alive can we argue or discuss!

To this Know-noting, the first thing that has gone wrong was substituting one man for all 3 defence personnel: when one is gone we would have had two others; second we would have forestalled the sudden takeover of army to substitute our civilian government of ‘we the people!’

Are we a Democracy at all?

But that is left to the ruling government, which claims to be the largest democracy! Are we? Not according to what appears in world press, ridiculing what our PM preaches and practices!

There is none who doesn’t make mistakes! Equally we should be quick to acknowledge mistakes and correct them. That alone is road to success! james kottoor, editor CWC.

Why do so many of our VIPs die in accidents? No one will say that murderous groups are plotting behind the scenes. Almost all the accidents that killed our leaders were truly accidents. Could it be that our planes and choppers suffer from poor maintenance? They are said to be in the best of conditions, maintained by the best of experts. Are there other factors unbeknown to the general public?

Security experts have practices and conventions based on what they have learned from experience. The manual they are asked to follow has several chapters. One of them, Chapter XXVI, deals with security arrangements for VIPs. It covers all possible problems. A typical section deals with plans “to ensure that terrorist/extremist/ fundamentalist elements do not gain access to the VIP.” Tactical wisdom is underlined. The manual emphasises that “the best arrangements are those where there is the least show of police force in uniform and yet full protection to the VIP is ensured… and there is no resentment of any kind in the public regarding the arrangements made by the authorities.”

The best laid strategies could not save Sanjay Gandhi or the popular Mohan Kumaramangalam. Sanjay perhaps invited the tragedy with his love for mid-air stunts going all wrong. The crash that killed Kumaramangalam was so devastating that his body could be identified only by the Parker pen and a hearing aid he wore.

Very different was the case of Andhra Pradesh Chief Minister Y S Rajasekhara Reddy whose helicopter crashed into a forest in 2009. (On hearing the news, 122 people in the state died, most of them by suicide and some by the shock leading to heart attacks.) A month after the disaster, investigations could not unearth any clue as to what happened. Simultaneous inquiries were ordered by the state and central governments, but they too failed to find any pointers.

Perhaps, the most sensational air disaster involving VIPs was the one that killed Madhavrao Scindia in 2001. It was a small (10-seater) private plane. It was raining heavily that day and experts had advised Scindia not to take to the skies. The royal scion trusted his own judgement – and perished, along with seven others in the plane, four of them journalists.

Putting several VIPs in the same flight is not done, as per security manuals. The tragedy that killed armed forces chief General Bipin Rawat had his wife and some other top officials in the chopper. Technically, this was a security lapse.

That must be why efforts were made to explain that Rawat’s wife had an official status as well; she was President of the Army Wives Welfare Association, the largest NGO in the country. She was described as “a catalyst in empowering army wives”. The defence forces will miss her as much as they miss General Rawat.

Our armed forces are a major element in disaster management. The role they played when floods hit Kerala last year won popular applause in a big way. As many as 11 lakh people were evacuated from Odisha’s coastal areas in less than 24 hours when a cyclone hit the region. They have carried out similar save-and-rescue operations in neighbouring countries as well. They were there when floods hit Sri Lanka last year and an earthquake shook Nepal. Their work when tsunami hit the region in 2004 will never be forgotten.

Captain Narayana Murthy is a good example of the soldier’s spirit. He was involved in some historic events like Goa Liberation in 1961 and the conflict with China the following year. After retirement, he joined the Airports Authority and played a central role in the evacuation of Indians from the Gulf region in 1990, still described as “the largest evacuation effort in the history of civil aviation.” He is past 84 now. But he can’t sit idle. So he is out in the busy streets working as a voluntary traffic warden. “I am still fighting,” is how he puts it.

But the fighters who lost their lives fighting are in a class of their own. Far back in 1963, two lieutenant-generals, an air vice marshal, a major general, a brigadier and flight lieutenant were lost in a helicopter crash in Poonch district in Jammu. Half a dozen helicopter crashes have occurred claiming precious lives. There must be something in our chopper fleet that calls for attention.

Topics like military equipment and their management are, of course, out of bounds to the lay public. But all citizens are concerned about our military’s strength as well as our men’s safety. And the feeling persists that accidents claiming military lives are unacceptably high. There’s something amiss somewhere.