Hypocrisy in the church is ‘detestable’, Pope says at audience! 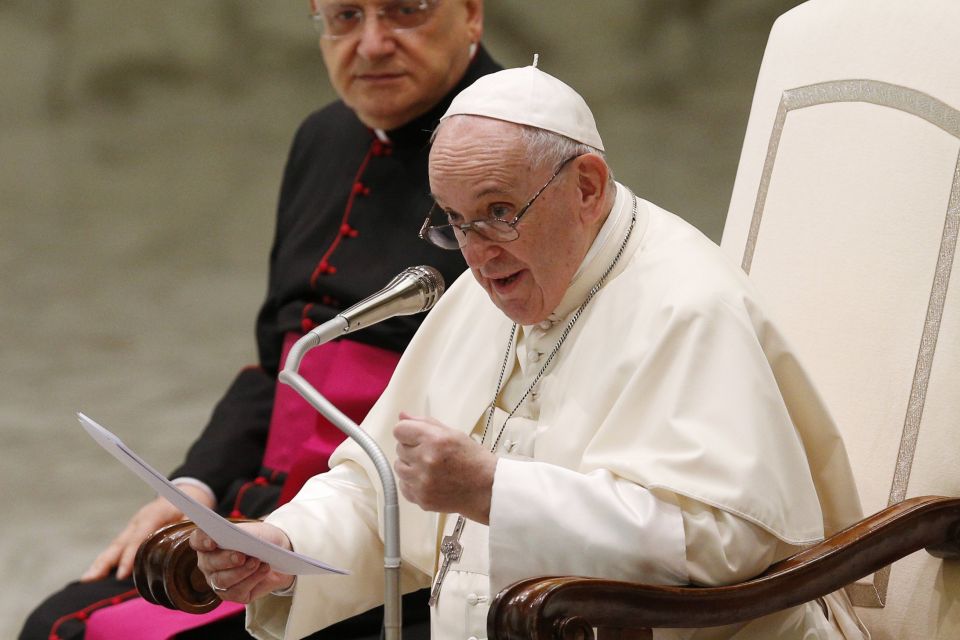 Is it possible to wipe out Hypocrisy from the face of the earth? It looks impossible for this Know-Nothing! In the creation story there were only two in Paradise: Adam and Eve. Just because, Eve wanted self satisfaction, Truth was sacrificed.          Trying to please self or all, you end up pleasing none. You become a hypocrite!!

In the second creation, Jesus the ideal SON OF MAN (or Son of God) called the priesly class: Hypocrites, whitewashed sepulchers, brood of wipers! Were the 12 disciples he chose much different, truthseeing, not selfseeking?

One betrayed him, another, Peter denied him thrice, Thomas doubted his resurrection, James and John pleaded through their mother to sit as Prime Ministers on his right and left! Where then are truth seekers, not selfseekers? All posh living, power seeking typical worldly men like our present Churchmen, or leaders in all Organized religions!

Neither the Biblical God nor the Son of God could not create or make humans Truthseekers, but only selfseekers! Then who is to blame: the Biblical creator or the created? May be that promted rational humans to label the biblical story a figment of human imagination ot a string of lies!

Humans created or evolved, history proves are always self-seeking, selfish to the core! Therefore irreformable, no matter how much you try! Of course a knownothingould easily be wrong! So I appeal to you wise Guys to shed your LIGHT for guidance! james kottoor, editor WCV (World Citizens’ Voice)

VATICAN CITY — Hypocrites are afraid of the truth, fearful of who they really are and incapable of truly loving, Pope Francis said during his weekly general audience.

All this pretending, he said, "suffocates the courage to openly say what is true and thus the obligation to say the truth at all times, everywhere and in spite of anything can easily be evaded," he said.

The pope continued his series of talks on St. Paul's Letter to the Galatians and focused on the dangers of the law by looking at the apostle Peter's "inconsistency" at Antioch.

Gentile Christians were free from the Jewish law, but there was pressure from people from Jerusalem that caused Sts. Peter and Barnabas to draw back from what the Gospel said.

That is why, in his letter, St. Paul condemns St. Peter "to his face because he clearly was wrong" by trying to appease critics who still observed Mosaic law and to justify his hypocritical behavior.

"Peter had been eating with the Christians of pagan origin without any difficulty; however, when some circumcised Christians from Jerusalem arrived in the city, he then no longer did so, because he did not want to incur their criticism," Pope Francis said.

"Watch out. The mistake was paying more attention to the criticism, to make a good impression than the reality of the relationships," the pope said.

This was serious in St. Paul's eyes, because other disciples imitated St. Peter, and, even though he did not mean to, "Peter was, in fact, creating an unjust division within the community" by not being transparent or clear about what he was doing, Pope Francis said.

In his letter, St. Paul "wanted to remind the Christians of that community that they were absolutely not to listen to those who were preaching that it was necessary to be circumcised, and therefore be 'under the law' with all of its prescriptions," Pope Francis said.

These "fundamentalist preachers," he said, "created confusion and deprived that community of any peace."

In his reproach to St. Peter, St. Paul uses the term "hypocrisy," which "the apostle wanted to combat forcefully and convincingly," the pope said.

Hypocrisy can be seen as a "fear of the truth. It is better to pretend rather than be yourself," he said.

Wherever people are living "under the banner of formalism, the virus of hypocrisy easily spreads," he said, mimicking the kind of strained, forced smile one might see — a smile "that doesn't come from the heart," but comes from a person "who tries to get along with everyone," but, in the end, gets along with no one.

"Hypocrites are people who pretend, flatter and deceive because they live with a mask over their faces and do not have the courage to face the truth," he said. "For this reason, they are not capable of truly loving" because they are limited by their ego and cannot "show their hearts transparently."

Hypocrisy can be hidden at a workplace "where someone appears to be friends with their colleagues while, at the same time, they stab them behind the back due to competition," he said.

It is not unusual to find hypocrites in the world of politics, when someone lives one way in public and another way in private, he added.

"Hypocrisy in the church is particularly detestable. Unfortunately, hypocrisy does exist in the church and there are many hypocritical Christians and ministers," he said.

Jesus, too, condemned hypocrisy, Pope Francis said, asking people to read Chapter 23 of the Gospel according to St. Matthew to see how often Jesus condemned such behavior.

"Let's not be afraid to be truthful, to speak the truth, to hear the truth, to conform ourselves to the truth, so that we can love. A hypocrite does not know how to love," he said.

"To act other than truthfully means jeopardizing the unity of the church, that unity for which the Lord himself prayed," the pope said.

At the end of the general audience, the pope greeted athletes competing at the Paralympics in Tokyo. He thanked them for showing the world what hope and courage look like.