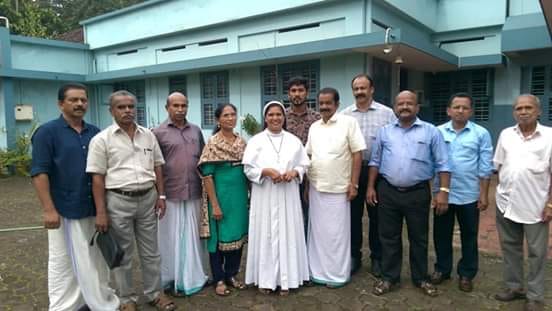 A lot had been written on Sr Lucy Kalappura FCC, who is dismissed from the Order and still continues in the Karakkamala convent giving enough headache and stomachache to the authorities. The matter is taken to the court and It may continue to be a gordian knot for the Congregation. A lot of people from the laity side support Sr Lucy (in the picture, see locals who came to the convent and met her to offer their full support). It is clearly never because she is perfectly right but because the Church and the Convent have many practises to be reorganised. Under the disguise of discipline what they talk about is rule by gun. I remember what Sr Jesmi, ex-principal of a prestigious Women’s College in Kerala, alleged a few years back. She cried that even against repeated prayers she was not allowed necessary number of under garments.

During the last Lok Sabha election, what the ruling Marxist party got in Kerala was just 1 out of 20 seats. Within a short time they identified the reason of this great fall – now they talk about behaving a little decently in the public. Our Church authorities have not yet realised the reason for this growing all – destructive home war within. I say that the clergy should sit together to address every question raised by the laity and find solutions in the right time. They should never try to impose their authority on the physical Church because it belongs to the public. Below I give a Chootebhai note under public circulation. Joseph Mattappally: associate editor – CCV

This is an open reply which Chotebhai wrote in response to the WhatsApp message, referred below:

Best wishes to all

I have been through your press release. You have linked two separate issues – the alleged multiple rape of a nun by Bp Franco Mulakkal of Jalandhar diocese, and the action taken against Sr Lucy of the FCC congregation. Let me clarify for your readers.

Franco Mulakkal is an accused in the case, and a 2000 page charge sheet has been filed against him in a criminal court. He is currently out on bail. I am one of those that campaigned extensively for his removal from the diocese once the charge sheet was filed. A priest of his diocese, who was a key witness, died under mysterious circumstances.I have also taken up matters of financial impropriety in the same diocese. The tax authorities are reportedly investigating this issue as well. Except for a few diehards, there is no sympathy for Franco. Five sisters of the alleged victim's congregation were also being hounded for speaking in her defence. Again many organizations, including the undersigned, campaigned in support of the five sisters, and their transfer was stayed. Franco is politically and financially influential, which is why he has managed to delay the trial.

Sr Lucy did no doubt come out in open support of the victims in the instant case. However, the disciplinary action against her goes back to 2015, much before the Franco case. I am nobody to judge her, but from what we are reading in the independent Catholic media in India, she has erred on various grounds, and it is possible that the congregation was looking for an opportunity to oust her. There may be a degree of vindictiveness in the action of the congregation, but it is certainly not an open and shut case, as you seem to indicate in your press release under reply. Going by comments in the Catholic media, while there is much sympathy for the rape victim and her sister supporters, the same cannot be said for Sr Lucy.

This is just for your information, so that we do not jump the gun, and keep things in their correct perspective..