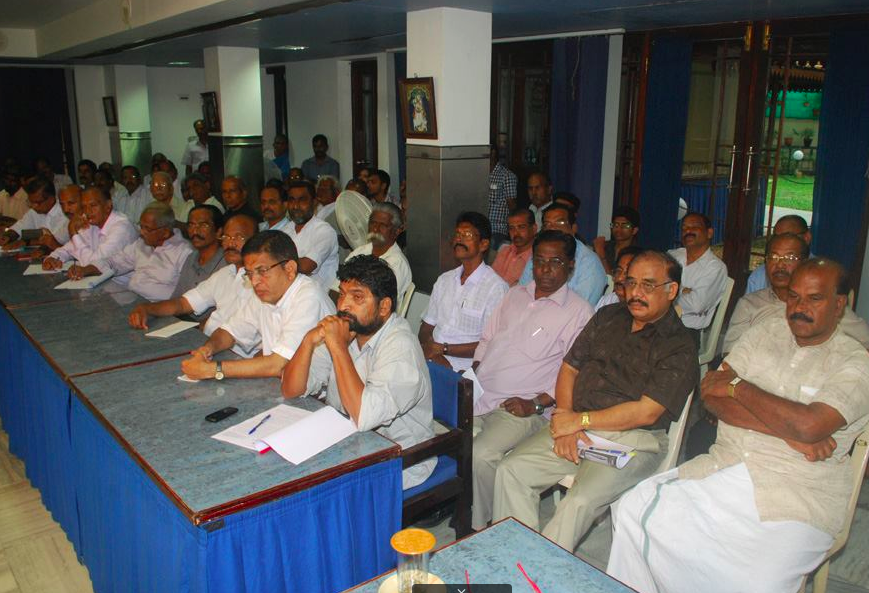 We, the 'Kerala Catholic Church Reformation Movement (KCRM) had sent a memorandum by registered post in the June 2016, to Bishop Michael Mulhall of the diocese of Penbrke, Canada, who is the one-man commission appointed by the Holy See to investigate and report on the issue of endogamy practice in Kottayam Arch diocese. In that we also had requested to grant an appointment when he comes to Kerala next time to meet him in person. But there was no response.

When he visited Kerala next time he came to Pala Bishop's House also. When we heard of this, we went there for an appointment but it was denied by Pala diocesan authorities.

Now, when he came Kerala recently in this month (Dec. 16) and after failing to get an appointment till the last day, we decided to go to Mount St Thomas to meet him in person. Accordingly, on 17th Dec., the previous day of his departure, K George Joseph (President, KCRM), Prof George Varghese (Vice President),and George Moolechal (Jt. Secretary) reached the venue. Though reluctant first, finally he agreed to have a short interview with us and we could exchange briefly our views on the issue which he listened patiently. He also said that he had received the memorandum in the month of July. Then we handed over a copy in person, he received it pleasantly.

We, the KCRM, publish the memorandum here for the benefit of all those who are concerned about the issue.
For KCRM, George Moolechalil (Editor, Sathyajwala)

Memorandum to Bishop Michael Mulhall, the one-man commission appointed by the Holy See to investigate the practice of Endogamy in the Arch Diocese of Kottayam.

Permit us to introduce ourselves as office bearers of a responsible organization named ‘Kerala Catholic church Reformation Movement’ (KCRM) that exists since 1990 in the Catholic Community of Kerala. Our motto is to function as a corrective force in the Church.

We understand that your Excellency is the one-man commission appointed by the Holy See to investigate on the issue of endogamy which is practiced in the diocese of Kottayam. On this matter, we wish to share several points with you.

We strongly feel that the imposition of endogamy on the faithful of Kottayam diocese is not only against biblical exhortations and church teachings but also against natural justice and basic human rights. This is indeed a malpractice!

There are thousands of faithful who are victims of this malpractice.  We list below some very practical problems which they have to confront:

We believe that divisions, tensions and rivalries happen as we go away from Jesus’ teachings. In the case of Kottayam diocese even  the teachings of the Church are violated.

Now we give the following reasons to explain why the Holy See ought to give strict instructions to the Kottayam diocese to do away with the policy of endogamy and accept all the expelled persons along with their wives and children into the fold of Kottayam diocese and to their mother parishes:

In fact, the Holy See had already recognised the problem. As a result of continued representations by the Knanaya immigrants in the USA, the Holy See had issued a Rescript in 1986 strictly disallowing the endogamous practice in the Knanaya Catholic parishes and missions in North America. But this had been openly violated by the bishops of Kottayam and Chicago (USA) dioceses with the help of the present Major ArchBishop of Syro-Malabar Church. In our opinion, the rescript has to be revoked and re-implemented not only in diocese of Chicago but also in Kottayam Diocese.

We conclude this with a request: When you come in Kerala next time for further investigations on the subject, please permit us also to meet you in person to present our views.

In the Union of Jesus’ Love