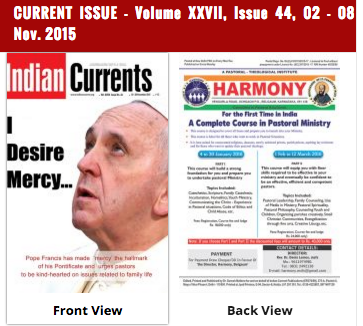 In his concluding address to the Synod on the Family, on October 24th, Pope Francis said that the Synod, “ was not about finding exhaustive solutions for all the difficulties and uncertainties which challenge and threaten the family, but rather about seeing these difficulties and uncertainties in the light of the Faith, carefully studying them and confronting them fearlessly, without burying our heads in the sand”.  These words are perhaps an appropriate reflection at the conclusion of the three weeks of intense deliberations of the Extraordinary Synod of Bishops held in Rome on the theme ‘the vocation and mission on the family in the Church and in the contemporary world’.

The Pope’s concluding remarks also indicate that all was not smooth during the Synod. He took on some of the Church leaders who “ bury their heads in the sand”.   He minced no words when he said that the Synod  “laid bare the closed hearts which frequently hide even behind the Church’s teachings or good intentions, in order to sit in the chair of Moses and judge, sometimes with superiority and superficiality, difficult cases and wounded families”.  Pope Francis also denounced “ conspiracy theories” and “ blinkered viewpoints” of some members of the Synod. He said that the Church could not transmit its message to new generations at times encrusted in a language which is archaic or simply incomprehensible.

The final document of the Synod which was approved in its entirety by the 265 voting members has 94 points with several proposals.  The tone of the document is rather positive and provides a message of hope to those families that face hardships; it spells out ways by which the Catholic Church throughout the world can help reinvigorate the family and also to help in integrating and healing those who suffer from marital breakdowns. In the context of the many complexities of today’s world, there were some overriding dimensions in the Synod; these include among others mercy, discernment, integration and inclusion.

Pope Francis has made the all-embracing Christian value of ‘mercy’ as the flagship of his Pontificate. He has often spoken about this and demonstrated it in very tangible ways on several occasions: reaching out to the refugees in Lampedusa; inviting the homeless to the Vatican; asking all Catholic Parishes in Western Europe to adopt at least one refugee family…the list is endless! It was therefore not surprising that he announced the Holy Year of Mercy (from December 8th2015 to November 20th 2016) as an extraordinary jubilee to highlight the Church’s “mission to be a witness of mercy” stating that “ no one can be excluded from God’s mercy”. In ‘ Misericordiae Vultus’ – the Bull of Indiction of the Extraordinary Jubilee of Mercy – he says “ may the message of mercy reach everyone and may no one be indifferent to the call to experience mercy.

The final document of the Synod mainstreams this fundamental of Christian discipleship when it significantly says, “ in accordance with Christ’s mercy, the Church must accompany with attention and care the weakest of her children, who show signs of a wounded and lost love, by restoring in them hope and confidence, like the beacon of a lighthouse in a port or a torch carried among the people to enlighten those who have lost their way or who are in the midst of a storm. Conscious that the most merciful thing is to tell the truth in love, we go beyond compassion. Merciful love, as it attracts and unites, transforms and elevates. It is an invitation to conversion. We understand the Lord’s attitude in the same way; he does not condemn the adulterous woman, but asks her to sin no more (Jn 8: 1-11)”

‘Mercy’ is also the attitude which needs to permeate into the hierarchical Church, particularly in the context of broken and fragile families. The Synod accepts that there have been some major shifts in the behavioural patterns of couples, marriage and family life. It needs, it is aware to strike a very careful balance between rigid orthodoxy and the radical changes which several sections of society seem to accept. Mercy is certainly one way of walking this tight rope.

The Synodal document calls for “ discernment as to which of the different forms of exclusion actually practised in the liturgical pastoral education and institutional arenas can be overcome”.  It also highlights the need for arriving at certain solutions in a variety of ways as suggested by Pope St. John Paul II in ‘Familiaris Consortio’.

“While continuing to proclaim and foster Christian marriage, the Synod also encourages pastoral discernment of the situations of a great many who no longer live this reality. Entering into pastoral dialogue with these persons is needed to distinguish elements in their lives which can lead to a greater openness to the Gospel of Marriage in its fullness. Pastors ought to identify elements which can foster evangelization and human and spiritual growth. A new element in today’s pastoral activity is a sensitivity to the positive aspects of civilly celebrated marriages and, with obvious differences, cohabitation. While clearly presenting the Christian message, the Church also needs to indicate the constructive elements in these situations which do not yet or no longer correspond to it.”

Commenting at the end of the Synod, Vatican Radio says “ inevitably, the more open, frank discussions of difficult issues, encouraged by Pope Francis at the start of the 2014 Synod, has required a new methodology to find agreement acceptable to all sides, without settling for a lowest common denominator. The key word in this process – unsurprisingly under a Jesuit Pope – is discernment, or the ability to listen, learn and respond to personal stories”

Integration and inclusion are complementing dimensions of any meaningful effort.  One enhances the other.  These are given paramount importance in the Synodal document.  While there is no specific mention of them having access to the Sacraments, there is however, a very strong call for the divorced and remarried, to be integrated into the life of the Church so that they do not feel that they are ex-communicated but in actuality “ can live and mature as living members of the Church”.

The Church has been particularly directed to reach out to those who have suffered the collapse of marriage and the family, to help in the healing and in their integration in the Church and also in wider society.

“ As for gay people”, the Synod states  “that Christ loved and died for every person, without exception”.  Therefore , “every person, regardless of sexual orientation, should be respected in their dignity, and welcomed with respect, avoiding ‘any brand of unfair discrimination’”.

Several families today are broken in their attempt to flee war and poverty. The current refugee crisis was certainly uppermost in the hearts and minds of those in the Synod as they discussed the great challenges faced by families who have to leave their country in order to start a new life. Pope Francis has already given a clarion call to all Catholic Parishes in Europe and in fact to every follower of Jesus.  Taking a cue from him, the Synod asks the dioceses and parishes to work to ensure that the dignity of migrants and refugees is respected taking into account their culture, beliefs and traditions.

In an attempt to be gender-sensitive, the document also calls that women “ be included in the decision-making processes of the Church”.

The Synod on the family was certainly path-breaking but beginning with Pope Francis, not all are flag-waving. There are whole groups who feel left out. Beth Doherty, Communications Officer in the Australian Catholic Bishops’ Conference writes “ We can assume that despite the recent Synod's focus on families, most of the voters have never had any involvement in raising families, and certainly not of experiencing pregnancy and childbirth. None have directly dealt with an abusive spouse, struggled to regulate family size, questioned whether to stay in an unhappy marriage, or dealt with a child identifying as gay, lesbian or transgender.”  Since there were hardly any women at the Synod, there will be several who will certainly share Doherty’s point of view.

Some of the divorced and remarried also feel that mere ‘acceptance’ of their state of life is not sufficient. The Church at this Synod has not demonstrated courage to include them – particularly in the reception of the Sacraments.

The LGBT fraternity naturally also feels more than let down! The oft-quoted words of Pope Francis on their reality, on his way back from Rio, “ who am I to judge?” certainly struck a chord across the board. Some were certainly hoping for some ‘miracle’ to take place in the attitude of the Bishops; the Church however, they feel, just wants to maintain the status quo.

There continues to be several challenges which need to be addressed; given the contentious nature of some of them and the fact that the Bishops at the Synod came from very different backgrounds and cultures it was certainly a herculean task to be able to respond to them in ways that are pleasing to all.

One ray of hope however, is that the Synod has now left it to Pope Francis to write an Apostolic Exhortation ‘on the Family’ as soon as possible as a follow-up of this important chapter in the Church’s history. The content of this Exhortation at this moment is anyone’s guess.  One can however, safely take a cue from his closing address to the Synod.  “ The Church’s first duty is not to hand down condemnations or anathemas, but to proclaim God’s mercy, to call to conversion, and to lead all men and women to salvation in the Lord….In effect, for the Church to conclude the Synod means to return to our true “journeying together” in bringing to every part of the world, to every diocese, to every community and every situation, the light of the Gospel, the embrace of the Church and the support of God’s mercy!”

Many concerns and challenges – but will there be change?