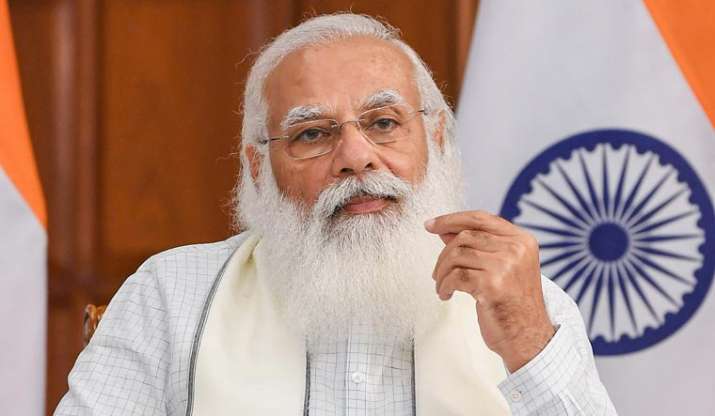 Cover photo:  The Modi Government has come under severe attack, both from the Opposition and citizens, who have said that the move is aimed at feeding on public sentiment to garner more votes.

As reported in News18 dated 10th August 2021, Congress Rajya Sabha MP and former journalist Kumar Ketkar asked in the Parliament, whether it is necessary and compulsory to print photographs of the prime minister on the Covid-19 vaccination certificates. Ketkar also asked for reasons behind the decision and who had made it compulsory. In reply Minister of State for Health, Bharati Pravin Pawar, replied that given the context of the pandemic and its evolving nature, the following of Covid-appropriate behaviour has emerged as one of the most critical measures for preventing the spread of disease. She said the photograph along with the message by the PM on the certificates reinforces the message creating awareness about the importance of following Covid-19 appropriate behaviour even after vaccination, “in larger public interest”.  Please note the phrase “in larger public interest!”

Readers will recall the post dated 30th September 2021 on PM CARES Fund, where there was a mention of several surreptitious actions of the Union Government which have invaded privacy. One of them is the imprint of Prime Minister Narendra Modi’s image on all Covid vaccine certificates.  The present writ petition (detailed below) in today's Telegraph Calcutta substantiates this point.  Isaac Gomes, Associate Editor.

Peter Myaliparambil, a senior citizen and an RTI activist from Kottayam in central Kerala, noted in his petition that the Prime Minister's photograph on his personal vaccination certificate was a violation of his fundamental rights.

The petitioner explained that he had paid Rs 750 for a single dose of Covishield vaccine at a private hospital in Kottayam, mainly because of the lack of slots for free vaccines.

"The petitioner has paid for his vaccination…. In fact, it was the non-availability of free vaccine slots that led to the petitioner opting for the Narendra Modi in New Delhi on Saturday. (PTI) paid vaccination. The state has no right to claim credit by inserting a photograph of the Hon'ble Prime Minister in the certificate issued to a paid-vaccine recipient," Myaliparambil said.

He submitted copies of vaccination certificates from the US, Indonesia, Israel, Kuwait, France and Germany to show that none of these featured pictures of the heads of state or government.

His contention is that none can encroach on another's private space. "The certificate issued to the petitioner, in his name, having his personal details and the details of a medical record, is his private space. The State has no right to access that space, any more than the petitioner consents to it."

Advocate Ajit Joy, who represents the petitioner, told The Telegraph that Justice P.B.Suresh Kumar had on Friday ordered the Union and state governments to file their responses within two weeks..

The petitioner contended that the purpose of such a certificate was to confirm the vaccination status of an individual.  “It is a certificate issued merely to confirm the status of vaccination of a person. The photograph of the Hon'ble Prime Minister has no relevance (to) such a certificate as can be seen from such certificates issued by other countries.” Myaliparambil highlighted how several campaigns were being run giving the entire credit to Modi for the “largest vaccination campaign in the world ” and cited how the University Grants Commission and Kendriya Vidyalaya Sangathan, Bangalore region, had put up banners thanking the Prime Minister for free vaccines.

“On the whole, the petitioner is concerned that the national campaign against Covid-19 is being converted into a media campaign for the Hon'ble Prime Minister … .There seems to be an effort to show the campaign as a one-man show, a propaganda to project an individual at State expense,” he noted..

He contended that the Union government and the Prime Minister “cannot claim to have done anything but their duty.” He noted that the Prime Minister's being given so much prominence in the Covid-19 vaccination campaign “is leading to the colouring of the petitioner's rational thought and critical appraisal leading to a distortion of the petitioner's freedom to vote including exercising free choice.”