Why is VHP’s Pravin Togadia so angry? 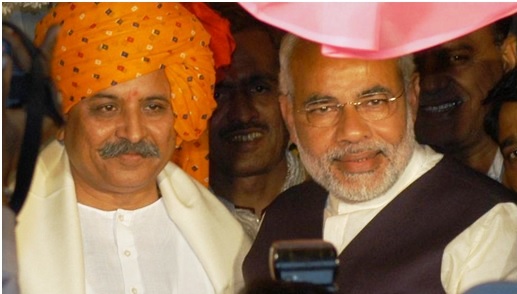 Once a friend of Prime Minister Narendra Modi, the VHP leader is today seen as a liability for the prime minister’s development agenda

(Note: Once close friends, when Modi was CM in Gujarat, why they are at longer heads now? Both are still staunch RSS-VHP members even now. But now Modi has graduated from CM to PM and BJP leader to a national leader of all  parties and communities and he has to sport two faces, one to please the country and world leaders another  his narrow RSS group followers.

Vajpai could do it naturally as he was a man of universal  outlook (recall his advise to Modi to stick to his Raj Dharma, not to his partisan, Hindutva dharma). Modi still has to go a long way to rise up to the stature of a Vajpai. Hence the conflict between the two. james kottoor, editor,ccv.}

There’s more to this than meets the eye. The allegation that the police attempted an encounter on VHP leader Pravin Togadia, who has been extended Z-Plus security cover, sounds far-fetched. Togadia claims he will go public with evidence to back his allegations at the right time.

If you so desire, you could keep waiting for the ‘right’ time. But to me the spectacle appears to be an outcome of the tendency embodied by the Vishwa Hindu Parishad (VHP) and its allied organisations that get hyperactive the moment the BJP comes to power. They get anxious to implement their agenda of right-wing Hinduism as early as possible. Suddenly self-styled gau rakshaks think they are free to slit people’s throats in the name of the cow.

These people forget that the Constitution nurtures the values of secularism and coexistence. Governments are formed with a pledge to protect the same Constitution. They don’t even remember that in present-day India you can’t run the government under the cloak of religion. India is an emerging economic superpower. To spread its wings wider, we need the cooperation of other countries, which is impossible wearing the cloak of fanatical politics. Another reason why these people are disgruntled is that people who used to be on the same page till yesterday suddenly became part of the ‘government.’ This is the beginning of the awkwardness in relationships. They feel that from swayamsevaks (volunteers) their friends have become the government, while they are left alone with the ‘mission.’ This dichotomy of mission and political supremacy has created a problem in Indian politics even earlier.

You may remember the AB Vajpayee era. Relations between the Rashtriya Swayamsevak Sangh (RSS) and the government had become tense even in those days. Not just Togadia, but Ashok Singhal, his senior in the VHP, an RSS affiliate, was noticed making adversarial statements then. Despite coming from the sangh himself, Atalji was friends with people from all walks of life. He advocated the politics of consensus. Representing the party in Parliament for a long time and staying in Lutyens Delhi had left an impact on his appearance, demeanour and character. He was a Lutyens man clad in a dhoti-kurta.

However, Narendra Modi has practised most of his politics outside the Capital. He considers that his strength. That is why he stays away from what he perceives as the Lutyens’ class. Please remember that Modi has always been close to the sangh and he has never concealed his belief in Hindutva. Apart from this, there is a considerable difference between then sangh chief KS Sudarshan and the new chief Mohan Bhagwat. While maintaining the basic values of the sangh, Bhagwat has given it a few contemporary touches in sync with today’s sensibilities.

That is why in close to four years of governance, no crack in the relationship between New Delhi and Nagpur, the headquarter of the RSS, has become public. As far as the VHP is concerned, to understand the context of Togadia’s complaint, we need to turn our attention to Gujarat’s politics of at the beginning of this century.

That was a time when Togadia and Modi used to spend a lot of time together. Both were big advocates of hard Hindutva, but as soon as he took over as chief minister of Gujarat, Modi realised the need to rein in his outspoken friend. If he hadn’t done so, it would have undermined Modi’s agenda for development. This is why, even if Togadia roared everywhere else in the world, he had to tread softly in Gujarat. Togadia became even more critical after Modi took over as PM. Now the question wasn’t about a state, but the nation. Is the present explosion a repercussion of that? It is another matter that the reverberations of Togadia’s explosion paled in front of another blast the same evening. The Centre had changed the direction of news headlines by revoking the subsidy extended to Haj pilgrims. If you want, you can search for politics in this.

Those present at the press meet organised in Ahmedabad included the prime minister’s staunch opponent Hardik Patel and state Congress chief Arjun Modhwadia. Some people think that the screenplay for this press conference was scripted by another political party, but I believe otherwise. Everybody is opportunistic in politics, but not everyone knows how to create opportunity.