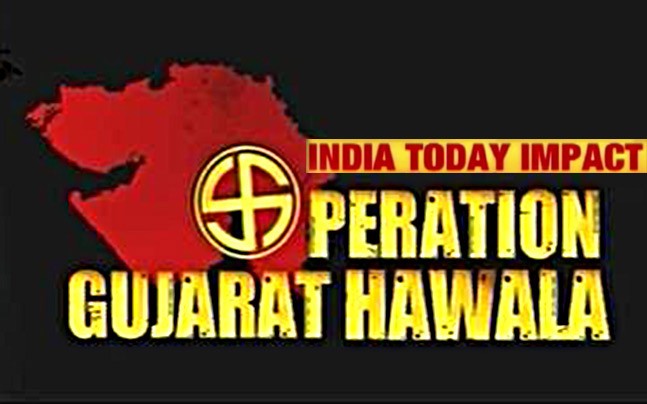 Readers would recall yesterday's post on IndiaToday.in report reproduced in CCV on operation Hawala in the Gurajat election to be held in two phases  on 9th and 14th December. The Chief Electoral Office of Gujarat has taken note of an undercover investigation done by IndiaToday.in against the state's cash couriers, popularly known as angadias.

It is the sheer power of black money pumped in unabated in during Election campaigns, that is killing democracy.  Genuine politicians who want to do good for the country, stand no chance against this systematic juggernaut of black money and are falling by the wayside.  One way to tackle this menace is make it mandatory by law that all election-related payments should be made by cheque or on-line. But who among our legislators will bell the cat? They will be like brothers in arms and nip the proposal in the bud. IndiaToday.in deserves rich compliments for bringing out this menace in the open.  Isaac Gomes, Asso. Editor, Church Citizens' Voice.

Within 24 hours of India Today's exposure on cash couriers in Gujarat Election, the Chief Electoral Office of Gujarat has taken the cognizance of undercover investigation done by IndiaToday.in against angadias i.e. cash couriers, and directed all the concerned State department and agencies to probe it further.

B.B. Swain, Chief Electoral Officer, Gujarat, in an exclusive telephonic conversation told IndiaToday.in that "Our team has seen the sting operation conducted by India Today group against angadias. At present, I could only say that we have directed all the state departments and agencies to look into this matter and probe it further."

On the query of further action-plan on angadias captured on camera, Swain declined to comment. He maintained saying, "It's too early to make a statement. Let our agencies examine it and get back to us."

In an undercover investigation, IndiaToday.in unraveled a devastating reality. In their damning confessions caught on camera, some of the state's traditional diamond or cash couriers i.e. angadias revealed how political groups have been using their well-entrenched network to route black money for campaign.

Earlier, sources within the Income Tax (I-T) department in Gujarat also confirmed IndiaToday.in that department has begun its discreet enquiry against all angadias, in the State.

One senior I-T official in Ahmedabad investigation wing, on the condition of anonymity told IndiaToday.in that a "discreet enquiry" has begun and found "most of the prominent angadias in Ahmedabad, Surat, Rajkot and Vadodara were shut down today".

When queried on further action-plan, the I-T officials remained silent, but indicated that the department is awaiting specific directions from Election Commission (EC).

Queried sent to Sushil Chandra, Chairman, Central Board of Direct Taxes (CBDT) remained unanswered. For next month's Gujarat assembly election, the EC has capped expenditure at Rs 28 lakh for each candidate in the fray. In fact, leaders across the political spectrum have also repeatedly called for "cleaner" politics.

Senior I-T officials in Gujarat explained IndiaToday.in, how Gujarat's economy has become a lame duck before these cash couriers.

"From small traders to leading politician, all of them transport their unaccounted money through this route. In fact, a monthly settlement do takes place with angadias, which are never reflected in their book of accounts", an official said.

"These angadias are so deeply-rooted that no establishments or political parties in Gujarat have the power to stop this illegal business. Their networks are so strong that most of them handle foreign funding during elections", Sharma said.

According to Sharma, unaccounted money of around Rs 900 crore would be used by political parties (Rs 2-5 crore per constituency) in Gujarat Election. "Angadias would play crucial role by handling almost 40-50 per cent of these black money," Sharma added.

Tried and tested by diamond merchants, angadias have been ferrying gems between Gujarat, Mumbai and New Delhi for generations. Most of them, in fact, are the backbone of the industry.