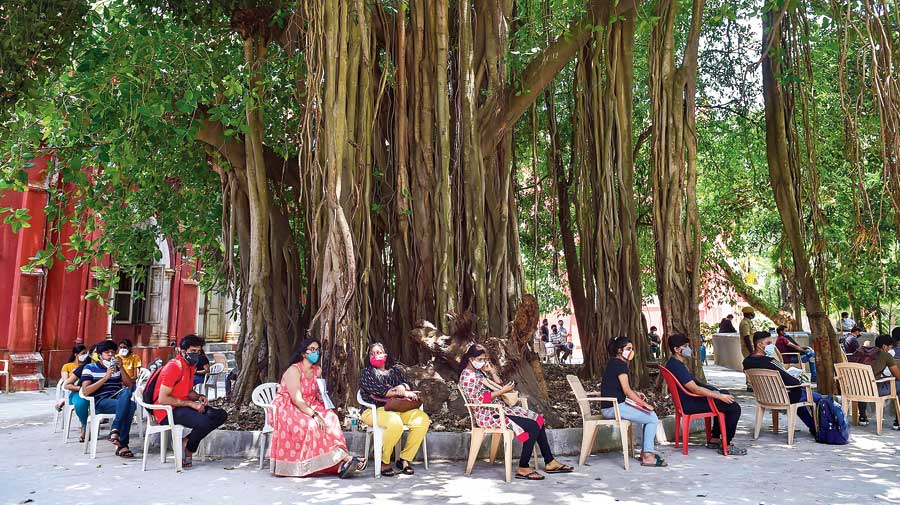 Cover photo:  A special Covid vaccination camp in Bangalore for those going abroad for education and jobs. Students need to furnish their admission documents or visas while those travelling for jobs have to produce the appointment letter or the visa. PTI

The Supreme Court of India has really put the Union Government of India at a spot and has posed several pertinent questions to the Government regarding its hazy vaccine policy.  A bench of Justices Chandrachud, Nageswara Rao and Ravindra Bhat said allowing manufacturers to charge states higher rates violated the fundamental right to equality guaranteed under Article 14 of the Constitution. It asked the Centre to give clear explanation on how it has utilised Rs 35,000 crore allocated in the Union Budget for procuremet of vaccines.  The bull has been caught by the horns. Isaac Gomes, Associate Editor, Church Citizens' Voice.

The Supreme Court on Wednesday raised “serious doubts” about the Narendra Modi government’s “liberalised” vaccine policy of “fixing higher prices as a competitive measure” and said it’s the responsibility of the Centre and not the states to provide free vaccination.

If the Centre’s bulk buying of Covid vaccines is why it’s charged a lower price than the states and private hospitals, it’s all the more reason the Union government should use its “unique” position as a “monopolistic buyer” to procure all the doses and provide them free to all Indians, the court said.

The bench of Justices D.Y. Chandrachud, L. Nageswara Rao and S. Ravindra Bhat said the Centre’s policy of allowing vaccine manufacturers to charge the states higher rates violated the fundamental right to equality, as did its policy of providing free vaccination only to those aged 45 and above.

The court underlined that this year’s annual budget had set aside Rs 35,000 crore exclusively for vaccine procurement.

“The central government is directed to clarify how these funds have been spent so far and why they cannot be utilised for vaccinating persons aged 18-44 years,” the court said.

If the states are forced to provide free vaccines by spending their own money, it would affect their development schemes and efforts to improve their health infrastructure, the bench said.

The court’s rebuke comes at a time several states, including Bengal, have demanded that the Centre provide free vaccination to all and underlined the country’s policy of free universal immunisation since Independence.

The Centre is buying — at Rs 150 a dose — half the vaccines produced in India and providing these free to the states to inoculate those aged 45 or above free of cost at government facilities.

Some state governments are nevertheless offering free vaccines also to those aged between 18 and 45 at their facilities while everybody has to pay for the jabs at private hospitals.

The court questioned the Centre’s argument that having the states and private hospitals buy half the vaccines would “attract more private manufacturers that could eventually drive down prices”, highlighting that the Union government had pre-fixed the prices.

“Prima facie, the only room for negotiation with the two vaccine manufacturers was on price and quantity, both of which have been pre-fixed by the central government,” the bench said.

“This casts serious doubts on UoI’s (Union of India’s) justification for enabling higher prices as a competitive measure. Furthermore, the central government justifying its lower prices on account of its ability to place large purchase orders for vaccines raises the issue as to why this rationale is not being employed for acquiring 100 per cent of the monthly doses.”

The court rejected the argument that the Serum Institute of India (SII) and Bharat Biotech (BBIL) — the manufacturers of Covishield and Covaxin, respectively — deserved to charge higher prices to the states because they had borne the risk of manufacturing the vaccines with their own money.

The bench stressed that this year’s budget had earmarked Rs 46 crore as initial payment to the two manufacturers under the private-public partnership model.

“Since the central government has financed (officially, Rs 35 crore to BBIL and Rs 11 crore to SII for phase 3 clinical trials) and facilitated the production (or augmentation of production) of these vaccines through concessions or otherwise, it may not be accurate to state that the private entities have alone borne the risk and cost of manufacture,” the bench said.

“Additionally, the central government would have minimised the risks of the manufacturers by granting emergency use authorisation to the vaccines, which should (be) factor(ed) into its pricing.”

The court questioned the Centre’s policy of “intervening in pre-fixing procurement prices and quantities for states/ UTs and private hospitals, but not imposing statutory price ceilings”.

The bench said the Centre’s policy of ensuring free vaccines at government facilities only for the 45-plus and frontline workers ran counter to the fundamental right to equality guaranteed under Article 14 of the Constitution.

Also, in the context of the Centre “receiving vaccines at a much lower rate from manufacturers, it is important for us to examine the rationality of the existing liberalised vaccination policy against Article 14 of the Constitution, since it could place severe burdens, particularly on states/ UTs (Union Territories) suffering from financial distress”.

The Supreme Court on Wednesday described as “prima facie arbitrary and irrational” the Centre’s policy of leaving adults aged below 45 to pay for their Covid-19 jabs while providing for free vaccination of those aged 45 or above.

While the Centre is not bearing the cost of the jabs for those aged between 18 and 45, some state governments are offering them free vaccination at their own expense.

The apex court also asked the Centre to explain its preparedness to meet children’s possible needs if there’s a third wave that affects them.

It agreed with its amici (friends) — senior advocates Jaideep Gupta and Meenakshi Arora — that the central government’s current vaccination policy was flawed.

The court agreed with the amici that the states had been left in the lurch because of the Centre’s refusal to procure for them their entire vaccine requirement.

It highlighted that during the second wave of the pandemic, many people aged between 18 and 45 had not just been infected but suffered severe illness, sometimes leading to death.

“Due to the changing nature of the pandemic, we are now faced with a situation where the 18-44 age group also needs to be vaccinated, although priority may be retained between different age groups on a scientific basis,” the bench of Justices D.Y. Chandrachud, L. Nageswara Rao and S. Ravindra Bhat said.

“Hence, due to the importance of vaccinating individuals in the 18-44 age group, the policy of the central government for conducting free vaccination themselves for groups under the first 2 phases, and replacing it with paid vaccination by the State/UT (Union Territory) governments and private hospitals for the persons between 18-44 years is, prima facie, arbitrary and irrational.”

It noted that many states and municipal bodies had floated tenders and tried to negotiate with foreign vaccine manufacturers, but largely without success as overseas companies prefer negotiating with Union governments.

The bench asked the Centre to provide clarifications on several issues, such as:

⚫ The Centre must place on record a projection of vaccine availability till December 31, and give details of vaccination trials and regulatory approvals.

⚫ The Centre should clarify whether its policy allows the states or local bodies to import vaccines.

⚫ Reports say some states are vaccinating over-45s with doses they have bought from manufacturers for younger adults, all because of a shortage of supply from the Centre. How will the Centre factor this in while deciding subsequent allocations to the states?

⚫ The Centre must disclose the nature of its intervention with respect to the final, end-user price that is being charged by private hospitals.

⚫ How will the Centre monitor the disbursal of vaccines by private hospitals, specifically those that have pan-India hospital chains?

⚫ Are private hospitals (that are part of interstate chains) bound to administer a quantity of vaccines in a state in proportion to its population? What is the mechanism to ascertain whether private players are indeed administering a state’s quota of vaccines solely to its residents?

⚫ The Centre must place on record any written policy in relation to this: whether it conducted a “means-test” of the demographic of a state or Union Territory to assert that half the population aged between 18 and 45 would be able to afford the vaccine. If not, what is the rationale for private hospitals being provided an equal quota for procurement as the states?

⚫ The Centre must explain the manner in which it and the states will ensure an equitable distribution of vaccines across sections of society.