Ratzinger: I managed to break up the “gay lobby” in the Vatican 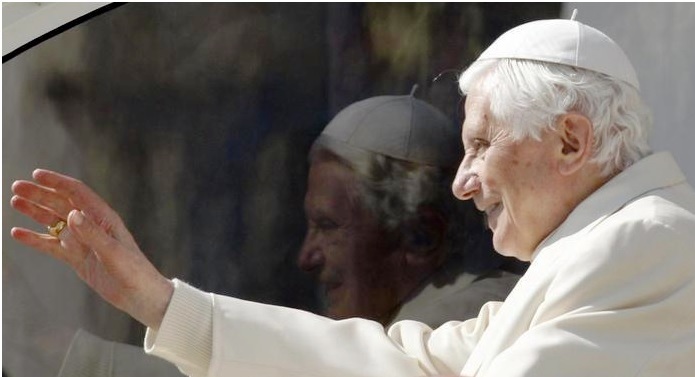 Pope Emeritus Benedict XVI even after retirement to a life of prayer and meditation, is still making international headlines. It is the first time in Papal History that two popes – one present and the other erstwhile – are hogging international limelight in tandem – Isaac Gomes.

In a book of memoirs that is due to be out in September 2016, the Pope Emeritus Benedict XVI admits the existence of a pressure group made up of four to five people.

The book has not even been released yet and it has sparked controversy. It is titled “Ultime conversazioni” (final conversations) and is an interview conducted by German journalist Peter Seewald, who has already authored three books based on conversations he has had with Joseph Ratzinger, two when he was cardinal and two when he was Pope. It will be published in September 2016 by Italian publisher Garzanti. The veteran Vatican correspondent, Luigi Accattoli, will be offering a preview of some of the contents in an insert that will come with Italian newspaper Il Corriere della Sera.

In the book there is a passage in which Benedict XVI “admits he knew about the presence of a ‘gay lobby’, made up of four or five people, in the Vatican. He says he managed to break this pressure group up. This information is completely new,” says Accattoli. Headquarters of IOR (the Vatican Bank)

In the book, the Pope Emeritus dismisses the criticisms of those who consider him too “academic” and too focused on his studies and writing and refuses to be considered as a “renovator” in the liturgical context. He discusses his attempts to reform the IOR (Istituto per le Opere di Religione, or the Vatican Bank) and the plague of paedophilia, underlining the difficulties a Pope faces when he seeks to deal with the “filth in the Church”. He talks about how he prepared his resignation in utmost secrecy and admitted that he was “surprised” when he learnt the name of his successor: he had some names in mind “but not his”. He speaks of “joy” he feels about the way in which the new Pope prays and communicates with the crowd and describes Francis the man and Francis the Pope, commenting on the things the two have in common and what distinguishes them.

There had been talk about a gay network in the Vatican at the time of the first Vatileaks scandal: rumour had it that an entire chapter of the “relatio”, the conclusions of the internal investigation entrusted to Curia cardinals Julian Herranz, Salvatore De Giorgi and Jozef Tomko, had apparently been devoted to this alleged pressure group.

In June 2013, Pope Francis touched on this in his speech to the leaders of the Latin American Confederation of Religious Orders (CLAR). The conversation had take place behind closed doors and its contents were not meant to go public but a summary was published on Chilean website Reflexión y Liberación.

A few weeks later, in the first in-flight press conference the Pope participated in on the plane from Rio de Janeiro to Rome, in July 2013, he answered a question on this: “So much is written about the gay lobby. I still haven’t found anyone with an identity card in the Vatican with “gay” on it. They say there are some there. I believe that when you are dealing with such a person, you must distinguish between the fact of a person being gay and the fact of someone forming a lobby, because not all lobbies are good. This one is not good. If someone is gay and is searching for the Lord and has goodwill, then who am I to judge him? The Catechism of the Catholic Church explains this in a beautiful way, saying … wait a moment, how does it say it … it says: “no one should marginalize these people for this, they must be integrated into society”. The problem is not having this tendency, no, we must be brothers and sisters to one another, and there is this one and there is that one. The problem is in making a lobby of this tendency: a lobby of misers, a lobby of politicians, a lobby of masons, so many lobbies. For me, this is the greater problem.”