Yesterday 23 May 2018, Haradanahalli Devegowda Kumaraswamy of Janata Dal (Secular) took oath as Chief Minister of Karnataka, exactly four days after BS Yediyurappa addressed the Karnataka State Legislative Assembly and resigned from chief ministerial post at Vidhana Soudha in Bangalore, ahead of the Supreme Court-mandated floor test on Saturday  It was a stunning reversal of Kumaraswamy's own fortunes coupled with a rare show of opposition unity (as the photographs of bonhomie show).  Is it one-time unity of different political parties in particular the regional ones, to keep the NDA juggernaut at bay? Or is it a clarion call for opposition unity to fight the NDA unitedly in the 2019 General Election, sacrificing personal ambitions?  There is no denying the fact that for a healthy democracy, a strong opposition is a must. Only time will reveal it to us.  Isaac Gomes, Asso. Editor, Church Citizens' Voice.

The peaks rose and fell in a seismic rush – tall, thin triangles formed by raised arms and clasped palms above a flowerbed of white, French rose, and lemonade pink – and India's political earth shook.

The moment was fleeting, a brief coda to the solemn reading of Chief Minister HD Kumaraswamy's oath — but when a colonnade of political stars as influential as Rahul and Sonia Gandhi, Akhilesh Yadav, Mayawati, Tejashwi Yadav, Sharad Pawar and Sitaram Yechury hoisted their hands to the heavens in unison, it felt like nothing less than the collision of tectonic forces.

Two, to be precise.

On one side – shall we say the right – the might of Prime Minister Narendra Modi's BJP, armed with an impressive electioneering machinery and the memory of a saffron romp across India's map. On the other, an Opposition invigorated by the ruling party's failures in parliamentary bypolls, the profusion of headlines appropriable for broadsides against the Centre, and — not least — the stunning reversal of Kumaraswamy's own fortunes.

Rewind the tape and see for yourself: Governor Vajubhai Vala's face was utterly inscrutable as he sat flanked by "Kumaranna" and his deputy chief minister, both clad in spotless white. But Vala (and everyone watching him) will remember all too well that the duo weren't his first choice.

Victory may have eluded the BJP in Karnataka, but Vala still saw fit to invite the single largest bloc of legislators to form a new administration. After counting ended last Tuesday, BS Yeddyurappa was swiftly appointed as chief minister.

But even before a floor test could rob the BJP leader of his shaky crown, he confessed to being outnumbered by the Congress and the Janata Dal (Secular). Wistful and teary-eyed, he resigned on Saturday – and Prime Minister Narendra Modi's foes rejoiced.

The pantheon of Opposition stars who attended the ceremony

"So many happy faces," the Congress tweeted after the oath-taking ceremony, and added a smiley to boot. (Photo: Twitter/@INCIndia)

Today 23 May 2018, at a Vidhan Sabha bedecked like a wedding altar, some of Modi's rivals exchanged handshakes and pleasantries, their faces shining in a manner reminiscent of wedding guests waiting for the priest to begin officiating.

But here, the marriage wasn't of man and wife, but of irony and circumstance.

Could anyone have foretold a scene where Akhilesh Yadav and his father's erstwhile foe, Mayawati, would sit side-by-side on a dias? A quick flashback to the bypolls in Phulpur and Gorakhpur explains much, but still, the vision was a shutterbug's delight.

And how about Mamata Banerjee's decision to share a stage with a Communist Party of India (Marxist) leader (Sitaram Yechury)? Or the fact that Chandrababu Naidu, until recently a key NDA partner, stood a few feet away from Tejashwi Yadav – the man who ceased to be Bihar's deputy chief minister thanks to a stunning BJP coup?

General elections are due in a year, and the calendar is choc-a-bloc with events that could yet upset any dreams of a united front against Team Narendra Modi. There will be state elections, Parliament sessions, and the messy business of strategising and negotiating – not to mention the rapidly-evolving nature of international relations. The road to 2019 is long, the terrain treacherous.

But when the last vote is counted after that jamboree of democracy, will there be another beautiful flowerbed, another heavenward flight of arms, another happy hallelujah for Modi's rivals? Or will fate do any brewing marriages of convenience part?

For now, we'll need to borrow some familiar lines from a cricket commentator of your choice: There are twelve overs left, and it's far too early to call. So sit tight.

This could go down to the wire. It isn't over yet. 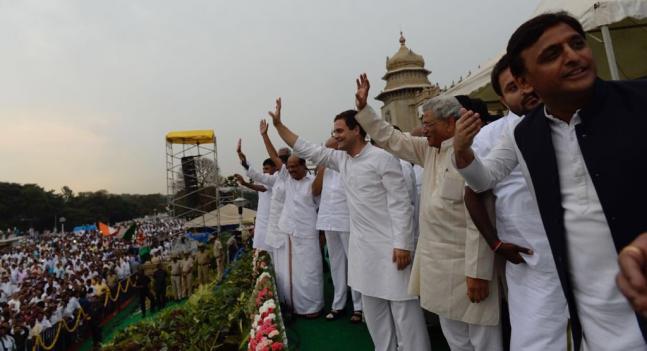 "It was a pleasure to meet and share the stage with leaders of opposition parties from all over India, at the swearing-in," Rahul Gandhi tweeted. (Photo: Twitter/@Rahul Gandhi)

Prime Minister Narendra Modi and Union Home Minister Rajnath Singh on Wednesday congratulated the JDS's H. D. Kumaraswamy and the Congress's G. Parameshwara after they were sworn in as chief minister and deputy chief minister of Karnataka although the BJP boycotted the event.

The BJP observed a "black day" and party sources spoke of plans to ensure the Congress-JDS alliance is short-lived.

"I congratulate Shri @ hd_kumaraswamy Ji and @ Dr Parameshwara Ji on taking oath as Chief Minister and Deputy Chief Minister of Karnataka. My best wishes for their tenure ahead, " Modi tweeted after the oath-taking in Bangalore.

Rajnath, the official No. 2 at the Centre, tweeted: "Congratulations to Shri H D Kumaraswamy and Shri G Parameshwar on taking oath as Chief Minister and Deputy Chief Minister of Karnataka. I hope Karnataka will move forward towards peace, progress and prosperity under the new Govt." Modi and Rajnath tried to rise above politics even as the swearing-in was viewed with anger and hatred in BJP corridors.

"This glory will be shortlived. This alliance will collapse in less than six months," a BJP leader said.

Given the mood in the party, BJP chief Amit Shah refrained from extending the courtesy of congratulating the new government till the filing of this report.

BJP managers predicted a fleeting life for the Congress-JDS alliance and indicated that plans were afoot to bring down the government, not immediately but certainly before the Lok Sabha elections next year.

The BJP believes differences between the Congress and the JDS will surface shortly and it could crystallise when the new government passes the budget in the Assembly.

None of the BJP legislators attended the swearing-in at the Vidhana Soudha. The party held protests across the state against the "unholy alliance". While there have been instances of individual leaders skipping swearing-in events in Karnataka, such an en masse boycott was unprecedented.

Addressing a protest in Bangalore on Wednesday, BJP leader B. S. Yeddyurappa lampooned the "opportunistic alliance" and foretold its quick downfall. He claimed that Congress leader D. K. Shivakumar was peeved at being ignored for the post. Shivakumar rubbished the claim.