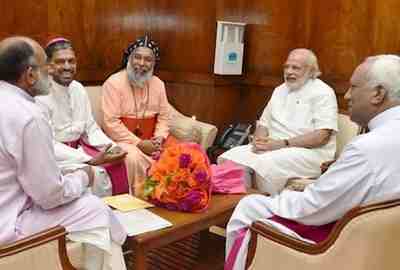 Catholic Church leaders in India, including bishops' conference president Cardinal Baselios Cleemis recently met Prime Minister Narendra Modi and made two requests — invite Pope Francis to India as a state guest and for Modi to personally lead an Indian delegation to the Vatican for the canonization of Mother Teresa on Sept. 4.
Modi in his own suave way did the predictable thing. He made no commitment. Modi just promised to seriously look into the matter, consult with his colleagues and do what is necessary. That is what a press release from the bishops conference said after the meeting.
Why did the bishops' conference send a representation to Modi asking him to invite the pope? The answer could come from early March news reports that said Pope Francis accepted an invitation from Pakistan's Prime Minister Nawaz Sharif to visit.
In early March, when media spoke of this invitation, bishops of India's 171 dioceses were at their biennial plenary. There was some discussion on Muslim Pakistan with just 1 million Catholics inviting the pope, and secular India of 17 million Catholics failing to extend an official invitation. Some bishops portrayed this as inefficiency by the Indian church leadership.
If church leaders were to meet with Modi, he will certainly invite the pope, they concluded.
The pope accepting a written invitation given to him does not mean he has agreed to visit a country. Although media reports said the pope will visit Pakistan before the end of this year, we are yet to see an official Vatican directive on this. Considering the problem Pakistan faces with militants and that a papal visit needs months of preparation, it is safe to say that a visit may not take place this year, if at all.
Although India and Pakistan are neighbors, no one expects a papal visit to these archrivals on a single papal literary. Diplomatically, neither India nor Pakistan will accept the pope visiting their rival and then coming as a state guest to their nation. This would mean the pope will have to travel twice to South Asia this year, if he were to visit the two countries. Possible but not probable.
The Indian bishops know all that. And that is why they wanted Modi to invite the pope "at a time convenient" to both India and the Vatican.
But more than a convenient time, Modi if he were to think of inviting the pope, must first prepare and convince his nationalist Hindu party, the Bharatiya Janata Party, with its countless right-wing groups that work to make India a Hindu nation.
Modi's party and its affiliates have long been clamoring against Catholic missionaries, saying that they are implementing a Vatican plan to destroy India's Hindu culture. Modi, must require a nod from the rank and file of his party before inviting and shaking hands with the pope.
The same goes with extoling Mother Teresa. During her lifetime and even after her death, the Bharatiya Janata Party has never accepted her work for the poorest of the poor. They have always projected it as ploy for conversion and objected to it whenever possible.
True to its policy, neither Modi or any of his party leaders have so far publically uttered a word of appreciation for Mother Teresa and her work.
Hence, Modi leading a delegation to the Vatican for her canonization is highly improbable.
His shaking hands with the pope and hobnobbing with Vatican officials cannot be done without inviting criticism at home simply because in the past the Bharatiya Janata Party has been a staunch opponent of the pope and of missionaries for being agents for religious conversions.
Opposition to Christian missionary work is emotionally close to the heart of every Bharatiya Janata Party supporter. The Indian states where the party has come to power, went ahead with introducing anti-conversion laws or sharpening existing ones that could interpret the church's social service work as a fraudulent means for conversion and therefore a criminal act.
When the Bharatiya Janata Party came to power in Delhi two years ago, one of the first discussions by its leaders in the media were ways to introduce a national law against conversion, despite the Indian Constitution giving citizens the right to profess, preach and propagate a religion of their choice.
That is why the bishops meeting with Modi assumes significance.
It is important for Christians in India, who make up about 2 percent of the population, that their church leaders maintain friendly relations with a democratically elected government. All the more so because the party that leads the present government does not accept or support the basic concept of Christianity — evangelization.
More images of Modi and bishops shaking hands in the media will help spread an idea of cooperation than of confrontation between Christians and right-wing Hindu groups. If nothing, that should at least help a re-think among those who orchestrate violence against Christians.
The meeting may not result in bringing the pope to India this year, or sending Modi to the Vatican for the canonization. But it has a positive message of invitation for cooperation and friendship.
So although nothing may come of the meeting and the atmosphere of intolerance against Christians continues unabated, it is important that Catholic leaders are seen to keep close contact with the top political leadership.
Only time will tell if Modi and his party have accepted the bishops' invitation for friendship.
Christopher Joseph is a journalist working for ucanews.com in India.
Source: UCAN