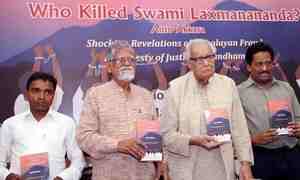 New Delhi: The killing of Swami Laxmanananda Saraswati in Kandhamal district in 2008 was carried out by forces who had envisaged subsequent collateral damage, a new book released Thursday said.

The book Who Killed Swami Laxmanananda? authored by Anto Akkara and released by veteran journalist and former high commissioner to the UK, Kuldip Nayar, gives details about sequence of events demolishing the theory of Christian conspiracy.

The killing of 81-year-old Saraswati on the night of Janmashtami in 2008 led to rioting, in which nearly 50 Christians were officially confirmed killed.

The book said Saraswati had said Pope and Sonia Gandhi as people who considered him as a threat to the Christianisation of Kandhamal. Hence, it was easy to spread rumours that Christians killed him.

The Christian baiters were behind the “supari killing” of Saraswati, Akkara said at the function. He said Saraswati, who was in Cuttack the previous day, went to Kandhamal on request of some people. His security guard was not with him the day he was killed.

The book says that after the murder, the names of about 25 Christians were distributed to police accusing them of killing Saraswati.

“The body of Saraswati was taken in a zigzag funeral procession for two days. It was a supari killing by forces, who had envisaged the collateral damage,” Akkara said.

He said a publication on Kandhamal riot by India Foundation, whose board members include Union ministers Nirmala Sitharaman and Suresh Prabhu and BJP leader Ram Madhav, made him investigate the issue .

Akkara said the publication by the India Foundation Harvest of Hate-Kandhamal in Crossfire by American anthropologist Michael Parker was gifted by Madhav to a Catholic church official in 2012. He said the book Harvest of Hate describes Christianity as a “defeated truth”.

Akkara said the same Michael Parker’s book is now being marketed as Orissa in Crossfire-Kandhamal Burning by Brannon Parker.

“Michael Parker or Brannon Parker do not exist, it is the work of India Foundation,” he said.

Three persons from the area, who were picked up by the police and later released, also spoke their story. They said they were innocent and picked by a mob and were handed over to the police.

Seven Christians have been sentenced to life for killing Saraswati. The matter is in Orissa High Court. A judicial commission, which inquired the matter, has submitted its report. However, it has not been made public.

Madhav rejected the findings of the book. He said the accused in the case had already been arrested.

“I do know who this author is. He may be apologist for any evangelist group. Anybody can write anything. But in the Kandhamal case, the accused are in jail. The matter is in court,” Madhav told The Telegraph.

He said the India Foundation came into being in 2012. The book Harvest of Hate was written by Michael Brannon Parker. “To say no such author exists is crazy,” Madhav said.