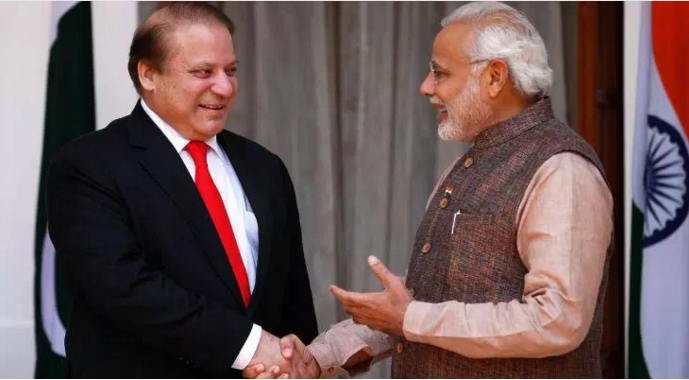 Prime Minister Narendra Modi never ceases to surprise. If his presence in Kabul on Friday morning ruffled feathers in Islamabad, within hours, he sprang a pleasant surprise on the latter. In fact, addressing the Afghan Parliament, which was built by India, he conveyed a message to Pakistan — India is in Afghanistan to contribute not to compete, to lay the foundations of future, not light the flame of conflict and seeks trust and cooperation from all countries in the region. It’s a clear signal to the Pakistan army that New Delhi has no hostile intentions but as a stakeholder, would do its best for peace and prosperity. Asserting India’s interests and allaying apprehensions thus, Modi engaged his Pakistani counterpart and birthday boy Nawaz Sharif in soft diplomacy. It’s perhaps a coincidence that Friday happened to be the birthday of former PM Atal Bihari Vajpayee, the last Indian Premier to have visited Pakistan over a decade ago. There is no mistaking the fact that Modi is taking off from where Vajpayee had left off, albeit in his own way.

After a few hiccups in the aftermath of the invite to Sharif for his swearing-in ceremony last year, Modi has revived the stalled dialogue with Pakistan away from the media glare. The process has gained momentum with the recent NSA-level talks in Bangkok and External Affairs Minister Sushma Swaraj’s visit to Islamabad. Critics would say we have gone down this road before and cite Vajpayee’s bitter experience as the best example. The Congress has already termed Modi’s move ‘ridiculous’. What they seem to be missing is that the PM is seeking to build a conducive atmosphere for the proposed dialogue. In short, he is making efforts to bridge the trust deficit with Pakistan, however difficult it may be.

It’s true Pakistan army runs the country’s foreign policy and there can be no peace without the Generals coming onboard. Will they reciprocate Modi’s gestures? Importantly, will the Pakistan army, which nurtures anti-India terror groups as strategic assets, be willing to shun terrorism as an instrument of state policy? Diplomatic engagement, international pressure and increased goodwill among people of the two countries might just force them to.