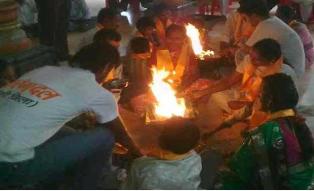 The ceremony was held from 6 am to 10 am at Nallaveetil Bhadrakali temple near Cheriyanadu in the district.

Several VHP and Arya Samaj leaders were in attendance. Ganapathi homam and shudhi homam were done for the ‘purification’ of the converts and they were also told to recite Gayathri Manthra as the final step of the ritual, reported The Times of India.

“We are moving ahead with our initiative and more families from other religions will be reconverted to Hinduism soon. We are being approached by many people who want to come back to their original faith,” said VHP Alappuzha district chief Prathap G Padickal, the main organizer of the event.

The district has been the nerve centre of such activities with the first ghar wapsi in Kerala held near Haripad on December 21 last year where 30 dalit Christians officially embraced Hinduism. dalit Christians, most of whom belong to Pentecostal and other non-Catholic and non-Syrian Christian denominations, are denied reservations that Hindu dalit communities avail of, and are hence a soft target for the VHP.

After a spate of conversion programmes by VHP in various places in the state, the UDF government created a Rs 5 crore corpus to set up a commission to find ways to integrate ‘converted Christians’ into the social mainstream.

Alappuzha Bishop Stephen Athipozhyil’s office informed TOI that the church has decided not to air any statements in connection with ghar wapsi. “We do not want to give any importance to this issue. So we want to keep away from commenting on this programme,” a spokesperson said.