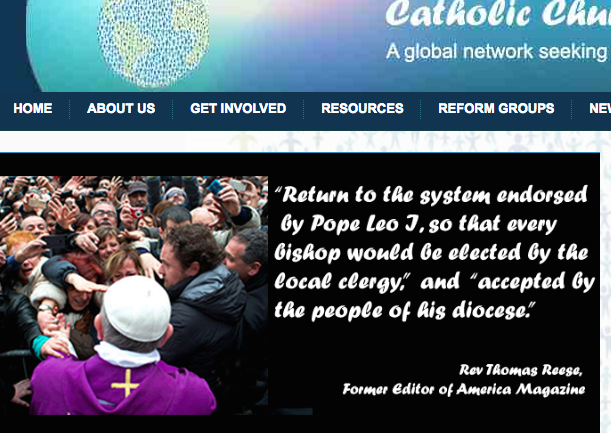 (Note: Catholic Church Reform Group Int’l, headed by Rene Reid, has forwarded the following message for immediate release.Yes, what is urgently needed now, that is, after conducting two synods in 2014 and 2015, both dominated and stream rolled by bishops, with hardly a sprinkling of laity with no voting rights, is a

Synod of the People of God, which has to be composed and represented by a majority of Laity and Clergy in their true proportion. The laity must be represented by men and wemen, 50 percent each as they are in reality. The principle is that our Synods should reflect the ground reality, not a distortion of it. jk, editor)

While acknowledging disappointment that a lay person, a family man or woman, was not assigned to head the department for the laity, family and life, through an Open Letter, Catholic Church Reform Int'l congratulates the recently appointed head, Bishop Kevin Farrell, for having long pushed for a greater involvement of the laity in the life of the church. The Reform Group asks specifically for these actions to be part of the new department:

"Pope Francis continues to call for the laity to 'play a major role in the life and mission of the church,'" says CCRI director, Rene Reid. "He seems to recognize that the reform needed will not come without the people speaking up and assuming some leadership. With this new department being launched today, we fully expect lay-led initiatives to be welcomed and supported." A case in point: In 1968 South American bishops held a conference in Meddellin Columbia where the principles of the Second Vatican Council were emphasized. Now 50 years later in 2018, a group of lay-led Catholics calling themselves Council 50 are calling for a People's Synod to be held in Brazil to carry on the work still left undone by the Vatican Council. "We've had two recent synods attended primarily by bishops.

The time is right to call a People's Synod and we hope to see this new dicastery support us in our efforts," says Ed Schreurs, a member of both CCRI and Council 50. The group is currently in process of collecting an opinion poll and calling local dialogue meetings for the purpose of producing statements that will be placed on the agenda of the 2018 Synod. Agreeing with the critical importance of calling local gatherings where the people can share their opinions with one another, Catholic Church Reform Int'l is currently encouraging these small local gatherings in communities in various cities around the world. All are welcomed to participate and let their voice be heard.