Catholics call for swift arrest of men who raped nun 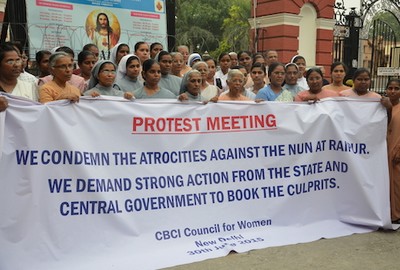 Demonstrators accuse police of inaction and 'trying to shield the culprits'.

New Delhi- UCAN. Christians in the western Indian state of Chhattisgarh and the capital Delhi staged protests Tuesday against what they called the lax attitude of police, who have yet to name any suspects in the rape of a nun late last month.
“We are investigating all kinds of suspects but we cannot say we are any closer to solving the case,” Neeraj Chandrakkar, additional superintendent of police who is handling the investigation, told ucanews.com Wednesday.
Chandrakkar said 15 teams are working on the case and “we have till now interrogated 150-200 people in connection with the crime”.
“We have also taken some 30-40 people to the victim for identification,” he said, adding that the victim is satisfied with the efforts the police are making.
The nun, who belongs to the Salesian Missionaries of Mary Immaculate, was raped when two masked men broke into her room, drugged and tied her up in the early hours of June 20 in Raipur, the capital of Chhattisgarh state.
Christians across the state staged silent marches to protest the slow progress in the investigation. Demonstrators wore white clothes and black badges during the protests.
All private schools in Raipur were closed Tuesday "expressing solidarity with the cause,” said Father Sebastian Poomattam, vicar-general of Raipur diocese.
He expressed hope that the demand for action would prompt police into arresting the culprits soon.
In Delhi, Some 100 Christians, including nuns from different congregations, gathered in front of the Sacred Heart Cathedral Tuesday to demand swift action in the case.
“We will take to the streets if nothing happens. We are just waiting for the state government’s response. If no action is taken against the culprits, we will launch a nationwide call for justice for the victim,” Tessy Antony, secretary of the women’s commission in Delhi Archdiocese, told ucanews.com at the rally.
Antony said the rape and all recent attacks on the Christian community are a way of threatening those who carry out missionary work.
“We will not be intimidated. We are born to serve the poor and we will not stop it,” she said, adding that nuns are vulnerable targets.
“They don’t have the security of a family. They work in remote, difficult conditions and become easy targets for such heinous crimes,” she said.
The protesters accused the police of “intentionally” not making any arrests in the rape case and “trying to shield the culprits.”
Holding placards and expressing words of solidarity with the nun, they demanded the immediate arrest of the culprits and protection for India's Christian community.
“We are scared to go out. I am a social worker and have to venture among different kinds of people. We wear ordinary clothes and avoid wearing our religious garb so as not to attract any attention,” said Bincy Mathew, a Salesian nun who took part in the protest.
Replying to the allegations of police inaction, Chandrakkar said people can say what they want but “we cannot disclose everything to the public as that will hinder our investigation”.
Source: UCAN