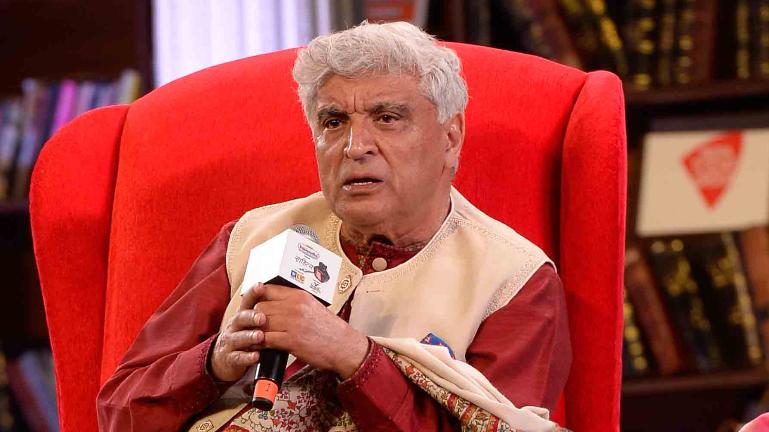 Javed Akhtar was speaking at Sahitya AajTak, a three-day literature festival in New Delhi where he asserted that loving your country is as natural as loving your parents.

Cover photo: From the Angry Young Man to nationalism and patriotism, Javed Akhtar spoke on a range of topics at Sahitya AajTak (Photo: Vikram Sharma)

A very candid exprerssion of opinion on nationalism and patriotism by Javed Akhtar the renowned Indian poet, lyricist and screenwriter. He is a recipient of the Padma Shri, Padma Bhushan, the Sahitya Akademi Award as well as five National Film Awards.  Akhtar said that he disagreed with the now-found and systematically advertised/pushed opinion of so-called-icons or political honchos, especially on the social media, that loving your country automatically means that you hate certain entities or people. He rightly says that the intensity of hatred, especially through concerted mob violence e.g. cow vigilantism, for one person or idea cannot be a barometer of love for one's country. Our Constitution gives us the right to freedom of opinion and therefore the right to dissent is absolutely in keeping with our constitutional and human rights. Even in our Parish Pastoral Council the right to dissent has been recognised and held sacred.  It is of course another matter those who voice their opinion on matters concerning the Common Good are sidelined or branded as anti-Church, even anti-Christ by the Church Hierarchy and its lackeys just as the current ruling dispensation brands those who oppose its overt and covert policies, as Anti-nationals.  The Indian Cricket Captain Virat Kohli is the latest in the list of high-handed personas when on 7th November (reported in Hindustan Times 8th November 2018) he asked a fan to leave the country just because he liked players from England and Australia.  Kohli retorted: “I don’t think you should live in India, go and live somewhere else. Why are you living in our country and loving other countries? I don’t mind you not liking me, but I don’t think you should live in our country and like other things. Get your priorities right.” Isaac Gomes, Associate Editor, Church Citizens' Voice.

How much you can hate somebody who disagrees with you or dissents with your views has become the barometer of judging your love for your country, lyricist, writer and former parliamentarian Javed Akhtar said today. "And, this is not right."

Akhtar was speaking at Sahitya AajTak, a three-day literature festival in New Delhi where he asserted that loving your country is as natural as loving your parents.

"Loving your country is natural… When Mary Kom wins I feel immense pride even though I have not visited the Northeast… I love my family and my friends… [but] that doesn't mean that I hate others," Akhtar said.

Akhtar said that he disagreed with the idea that loving your country automatically means that you hate certain entities or people.

Accepting that somebody is different from you and letting him be is a part of Indian traditions and culture, Javed Akhtar also said. "If someone tells you to be a certain way, he is trying to making you unlearn thousands of years of our culture."

Akhtar also suggested that he does not see nationalism as something that is inherently dangerous.

"Nationalism is dangerous only if it makes you hate [somebody]. If nationalism is about loving your country, then it is perfectly okay," Akhtar said.

Javed Akhtar also said that the boat called India may rock occasionally, but it will never sink.

"I can write this in my blood," Akhtar said as he explained how India has been through a lot and has never become imbalanced.

'OKAY WITH BEING ABUSED'

While talking about the backlash he receives whenever he comments on any political or religious hot potato topic, Javed Akhtar said that he is okay with the abuse he often receives.

"I am so confident in my patriotism that I do not care who says what," Akhtar said when asked about his reaction to people calling him a "deshdrohi" or traitor.

"When communal people from both sides abuse you, it means you are doing something right," Akhtar said. "If one of the [communal] groups stops abusing me, I will be worried."

Javed Akhtar rejected the notion that any successful Hindi film director thought with a communal or nationalist mindset when directing their project.

For example, Akhtar said, a director who wants his film to succeed and become a hit will only pick the best professionals to work on the project, regardless of their religion, caste, gender or creed.

"Look at the credit roll that plays out at the end of a movie," Akhtar said. "You will find that people from across castes and religions have worked on the movie".

Apart from his lyrics, Javed Akhtar is also known for one of the most iconic characters that have come out of Bollywood: The Indian Angry Young Man, which was famously portrayed by Amitabh Bachchan in movies such as Zanjeer, Sholay, Deewar and Coolie, among others.

The Angry Young Man, Akhtar said, was a born out of a phase. "The anger was because we had just come out of a shattered dream."

The writer also said that the new icon will be a much more reasonable man who will seek social justice.

Akhtar called the movement much needed and said that the problem of sexual harassment is not that of women alone. "Every sharif aadmi" or all gentlemen must share the burden of the problem, Akhtar said.

The recent wave of #MeToo has done one thing, according to Akhtar: It has instilled fear in men who harassed women.

"Aise himat nai karenge jaise karte the (they will not dare to be so brazen like they were)," Akhtar said.

'MY BEST YET TO COME'

When asked which one of his songs he considers his favourite, Akhtar simply replied: "I will write my favourite song tomorrow."

Akhtar said that his past work is an inheritance that belongs to the audience and not him. The audience, anyway, is responsible for making his works great, Akhtar said.

"We [the creators] don't make a work good. They become good when the reader or the listener makes it their own… Works become memorable when the audience infuse their own emotions into them," Akhtar said.