Francis: “All Christians have Jewish roots” 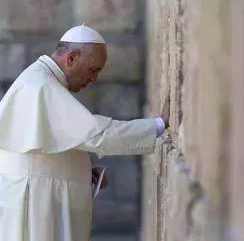 the 50th anniversary of the Council document “Nostra Aetate”, which “marks the irrevocable rejection of anti-Semitism”. “We are no longer strangers but friends, brothers and sisters”

ANDREA TORNIELI
vatican city : “Christians, all Christians have Jewish roots”. Pope Francis reminded people of this in his audience with the participants of an international meeting organised by the International Council of Christians and Jews on the occasion of the 50th anniversary of the Council declaration, “Nostra Aetate”, which laid down new premises for the relationship between Catholics and Jews.

The Pope was glad that Rome was chosen as the city to host the meeting. Rome is the city “where the Apostles Peter and Paul are buried and both of these figures are essential reference points for all Christians: they are like “pillars” of the Church. And Rome is home to the oldest Jewish community in Western Europe, whose origins date back to the Maccabean period.”

“So Christians and Jews have been living together in Rome for almost 2000 years,” Francis pointed out. “Though that is not to say there have been no tensions between them through the course of history.” The Pope explained that a “real fraternal dialogue” was able to develop “from the Second Vatican Council on, after the promulgation of the “Nostra Aetate” declaration. This document marked the definitive acceptance of Christianity’s Jewish roots and the irrevocable rejection of anti-Semitism.”

Francis went on to mention the “rich fruits it produced,” adding that an appraisal of Jewish and Catholic dialogue can be made with gratitude… Our fragmentary human nature, our mistrust and our pride were overcome thanks to the Spirit of God the Almighty, so that trust and fraternity would continue to grow among us. We are no longer strangers, but friends, brothers and sisters,” who “believe in the same God, Creator of the universe and Lord of history, despite our different perspectives”.

“Christians, all Christians,” Francis continued, “have Jewish roots. For this reason, ever since its creation, the International Council of Christians and Jews has welcomed all the various Christian denominations. Each of these, in their own way, is connected to Judaism, which in turn is characterised by different currents and sensitivities.” The phrase about Christianity’s Jewish “roots” echoes in some way the words used by Pius XI during an audience he had with a group of Belgian pilgrims on 6 September 1938: “anti-Semitism is unacceptable. Spiritually, we are Semites”

This is how Pope Francis summed up the differences between Christians and Jews: “Christian denominations are unified through Christ; Judaism finds its unity in the Torah. Christians believe that Jesus Christ is the Word of God made flesh in the world; for Jews, the Word of God is to be found above all in the Torah. Both religious traditions have as their foundation, the One God, the God of the Alliance, who reveals himself to mankind through His Word.”

Finally, the Pope recalled that in its reflections on Judaism, the Second Vatican Council “took the ten points of Seelisberg into account. These were drawn up in this Swiss location, in 1947. And these points were closely linked to the foundation of the International Council of Christians and Jews. We can say that an initial idea for a co-operation between your organisation and the Catholic Church was already budding.”