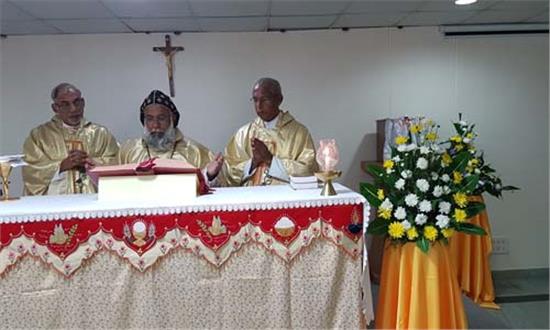 Note:  The talk of the town every where for the past two weeks in India  has been on the sorry shameful plight of a Kerala Nun allegedly raped by bp. Mulakkal. She was made to run from pillar to post for months  complaining to her superiors, Bishops, Archhbishops, Cardinals, CBCI heads  and Vatican Nuncio in India, all to no avail.

Finally she approached the civil court and five of her convent sisters conducted a two week  sit-in strike near the High court in Ernakulam and got the Bishop arrested. He is now in Pala Jail.

The most shameful thing even at this time is that all the Holy Excellencies, Eminences kept their  holy mouths shut, never uttering a word sympathy for the victimized nun. One politician called  her a prostitute, few other bishop blamed the nuns for disobedience, indiscipline and sullying the name of the Church. Bp.of Kanjirapally became the butt of ridicule for comparing Mulakkal to Jesus crucified and one of his faithful retorted asking: Was Jesus accused of any rape?

But one Archbishop made bold to give full support to the victimized Nun and her friends pleading for justice. He also publicly apologized to the Sisters and the faithful for the scandal in Episcopal circles.  His name is Archbishop Kuriacose Bharanikulangara of  Faridabad, Delhi. He belongs to the Syromalabar Rite whose reputation is getting reduced to Zero due to so many financial and clerical sexual scandals. So we at Church Citizens Voice (CCV) salute him as the “Solitary boast of Indian Bishops”

The Heroes who made history in the Catholic Church are the Five Sisters who made a two-week sit-in strike for justice near the Ernakulam High Court.  Once again the CCV makes an appeal to Francis to do a “Chile like cleansing of the timple” in India. We have been asking for it from last February. If our appeals reach the Pope he will surely act. The problem is there are so many vested interest middle men, Indian and bribed foreign ones blocking such petitions and appeals from reaching the Pope.

But the walls of Jericho are sure to fall once the cries of the faithful (laity) rise in unison  to the heavens.The following is a letter CCV editor wrote to Archbishop Kuriacose and his reply, so that thanks to your prayers India may  be blessed with many such bishops. james kottoor, editor, Church Citizens' Voice.

My Dear Younger Brother in Jesus,

Congrats and a BIG God bless. i was thrilled and comforted when you spoke out like a ‘thunderbolt, and it pierced my heart like a lightning from a pitch dark sky of over 180 bishops, all cowardly and afraid to open their their mouth in support a victimized Nun(s).

And I wondered: Is there not a single bishop in India like the brash, angry young  SON OF MAN of Nazareth shouting at the high priests of his time: "Hypocrites, whitewashed sepulchers, brood of vipers" to stand up with the exploited Nuns of India to whom alone should go 'all honor and glory' which the church in India may have, and not  to the most comfortable class of bishops, with many exceptions of course, whom I know personally.

I really mean all what I said, not as flattery – ‘cui honor, honor’(give horour to one who deserve it)  — when blame is due I have been equally brutal, as I was in the case of my dear friend Alancherry, with no ill-will to anyone without  failing to call a spade a spade.

Already on Oct. 3rd I sat up the whole night and wrote the article  and got it published in CCV and Daily news New York,  referring to you and a solitary silver lining in the pitch dark horizon of the Catholic hierarchy, the rest so shameful today for India. I posted it more elaborately in my face book as well.  That is, evangelization for me == bearing witness to truth!

That I cannot do as long as I am in the company of betrayers and followers of the Pharisee  praying in the temple saying he is  better than the publican, which all of you continue to imitate. Hence I called quits openly 4 years ago at my Chicago Cathedral hall speech, and became just a last and least member of the CATTLE CLASS where I am now perfectly happy and at piece.

Once in a way you used to react to my articles and I heard you stopped because some others in the episcopal fraternity called you a black shepherd among them for supporting me. You don't have to respond to me, but hesitate  not to bear witness to TRUTH however bitter it is. It was so for Jesus.

Of course I have my criticisms of you, and differences but it is not the time to mention them. But  indirectly I hinted at it already in my article when I referred to you as (Arch)bishop, with arch in brackets. Intelligenti paucca!

On the  brighter side, your example reminded me of my fond description of Mother May as "Tainted natures solitary boast"(Wordsworth). Some where I referred to you as the Solitary boast of the Indian Hierarchy of over 180 in the Nun rape case.

Don't want to make this an article, but wanted to covey a word of appreciation from "james chetta" which you have used in some of your previous letters. So keep happy and well even when some are or may be grinning at you.

Be happy and smiling, God bless.

james, your chetta in the Cattle Class, not in ZERO church!

Dear James Chettan, (my earlier addressing was with all its cordiality and fraternal respect),

Thank you very much for the kind words. Silence has a limit. And I felt the agony of  my people and others elsewhere on this situation and I decided to speak out.

We are all familiar with the term “pastoral solicitude” a nice theological expression. But it presupposes also “pastoral sensitivity”, which is meant by “smell of the sheep” by Pope Francis. It is enough just to get a feedback from the confessional and counselling desks (if any pastor is interested) how these occurrences have shaken the faith foundation of our faithful, anybody having a pastoral solicitude would speak out and dare for an open apology!

My faithful who listened to that (around fifteen thousand), received those words with tears. They took it as timely and soothing to their disturbed and confused minds. The general response was very positive, though some cynical corners see it differently.

For your information, I attach a note by our PRO just to highlight some reactions.Thank you for sending your items for reflection. I read them regularly, though do not respond. That’s indeed a great service.

It seems that you are in the US, I was in NY for about five years, at the UN Mission.

MANY THANKS and God bless you, I am only a know-nothing in the Cattle class to bless anyone. For your kind information I am in Ernakulam.

I did my journalism, at Marquette, Milwaukee, after my doctorate in Theology in Rome. I never dreamt  any of it but was dreaming to go to Assam,Shillong,  everything went topsy-turvy and a new programe was meticulously planned for me by the saintly Archbishop Louis Mathias of holy memory and after journalist degree, I returned after working 3 months each in 3 Catholic weeklies for practice,  to Chennai to take up editorship of New Leader, never to return to US again.

But my two daughters went to States as qualified BSC nurses, became US citizens in Chicago and got green card for my wife and me, so just to oblige them we went some 9  times and returned at the earliest, as I am more comfortable in India,  hoping not to go again.