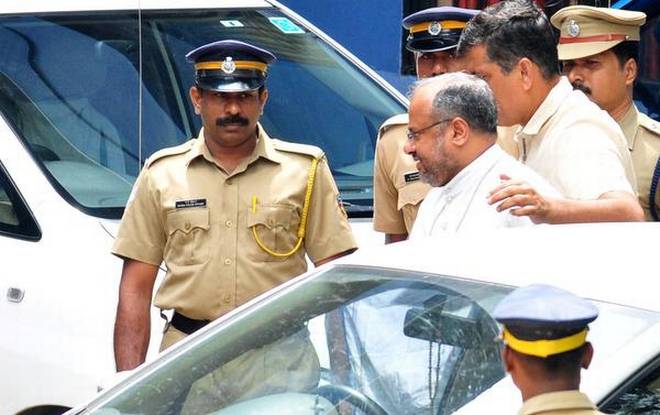 Cover image: Bishop Franco Mulakkal being brought for interrogation to the office of Superintendent of Police in Thripunithura on Friday.   | Photo Credit: H. Vibhu

Finally Bishop Franco Mulakkal is arrested after 90 days, since the complaint was registered.  Would it have taken such a long time if the raped were a poor village girl? Justice delayed, is justice denied, whether it is in Church or society. Where is equality in the Church?

Is there such a thing called “the Option for the Poor” and exploited in the Catholic Church or in any of the existing Churches? Did any bishop in India open his mouth in support of the poor suffering nun? One towering bishop did it, indirectly at least. He is  more than a bishop,  a Cardinal,  Oswald Gracias of Bombay who is the president of the Latin Rite Church. The three divided and competing churches are another curse and shame in the Church in India, which calls itself a close-knit family

But what happened to Cardinal Gracias?  He was made impotent or emasculated by the Secretary General of CBCI Bishop Mascarenas saying that it was his personal opinion not of the whole Bishops of India. What Gracias said was that Mulakkal should step aside and face inquiry,  which was what every sensible expert in law  also said. In any case Pope Francis was quick to endorse his view by transferring an  auxiliary from Bombay to relieve Mulakkal of all his pastoral duties.

If the Nun were raped by a non-Christian, Hindu, Mulsim,  RSS or a Naxalite the whole of hierarchy and laity (the prominent Chevaliers among them) would have made a hell of a noise and protest marches.

When an elderly nun was raped in Ranaghat (Nadia district in West Bengal), two hours by train from Kolkata, they did that and the then President of the CBCI Baselios of Trivandrum went all the way to visit,  console and sit with the nun.

But in contrast, he did not care to say even a word of comfort to Bishop Gallela of Kadapa when he was brutally attacked and manhandled by his own high caste Reddy priests in the diocese. It was two years ago and then also it was again Cardinal Gracias of Bombay who was first and prompt to condemn it while even the Andhra bishops were very slow and wishy-washy in what they said, touching no where.

Of course today Kadapa bishop is embroiled in sex controversies  similar  to that of Jalandar Bishop. We brought it out, the whole story in the CCV two months ago with photos of the Bishop, faithful and lower caste people protesting when he came to say Mass with the protection of the police.

Two prominent lay people from Kadappa Revikumar Mesa (ravikumarmesa@gmail.com) and Prasad Sambat: prasad.sambatur123@gmail.com) both belonging to the lower caste are pursuing the case in real earnest, with regular letters to bishops, cardinals and Pronuncio, without receiving any response from any of them.

The case in Kadapa is antedating that of Jalandar and Ernakulam Land scandal. So we in the CCV had argued that the Kadapa case should be taken up before that of Jalandar. Of course many cases like Abhaya case 26 years ago and others drowned in well or otherwise are pending all thanks to the money (nor moral) power of the Church.

Coming back to the arrested bishop Mulakkal and the Nun, the TV channels and the print media are comparing them to the Attacker and the Attacked, the hunter and the hunted. Actually it should remind us of the trial of Jesus when Pilate asked:  “Whom shall I release: the Man called Jesus or Barabas, and the crowed shouted ‘Crucify, Crucify the Nazarene!”

None of the bishops, Latin, Syromalabar or Syromalankara, said a word in support of the lonely Nun. Not a counter-witness to Jesus? Nor did any Laity Association of All-India standing, organized political party, national or regional say a word. In Kerala no political party, Congress, Communist or BJP, spoke up for the victim. The CPM stalwart Kodieri, blundered; wrote article in paper and spoke ridiculing the Nuns protesting in the street, while Pinaray’s stepney openly supported.

Of course all political leaders, starting from PM Modi to all MLAs belonging to all parties, shout at the top of their voice, that they are for the poor, oppressed, marginalized and exploited with a view to getting their votes at election time, not when the poor are in dire need. Judge them all on what they do, not on what they say.

Time and again CCV was forced to say that the Church in India is just a carbon copy of various political parties in India, concerned primarily with power, position and the art of making a fast buck. Are they not all millionaires or crorepaties? Can anyone be compared to the ordinary citizen?

For the first time we saw Bishop Mulakkal as an ordinary, in pant and shirt, after the arrest. Before that he was in Episcopal paraphernalia, parading himself as an Extraordinary with Captial ‘O’. One is tempted to cry out: “Every dog has its day!”

Participating in the public protest and fasting, there were five nuns regularly. More Nuns from the same congregation wanted to join  but they were threatened with dire consequences and were forced to stay indoors. But many former Nuns and people from various cultural organizations participated in the 14 day sit-in strike near the Kerala High Court.

They were joined by many priests, especially from Ernakulam-Ankamaly diocese, as they were already divided on the issue of Cardinal Alancherry discredited on land deal.

What is waiting for Bishop Mulakkal, whose arrest was registered by night yesterday (Friday)? His protectors and defenders will hatch out ways to escape stay in prison in the first place by hook or crook. One way to give him good rest and royal care is to make him fit for a good hospital treatment run by the Catholic Church as he still has to go through medical check up before his punishment is declared.

Already it is heard or rumoured they have managed to discover some heart problem for which he may need prolonged stay in comfort in a good hospital. Also his bail application is to be considered only on the 25th by the court. Will he be fit for the ordeal, health wise?

Historic and a great come-down

There are an aweful lot of things to be discussed which we shall try to do bit by  bit. In any case Mulakkal made history in India, also it has been a great “come-down” for him, but nothing compared to Jesus who emptied himself to become a slave  to serve and wash the feet of his disciples.  “The foxes have their holes, the birds have their nests, the Son of Man had no place to rest his head."

But then who in the Church cares to follow the Nazarene, the rebel who started his revolt even before he became a teen ager – at 12 he started playing truant and disappeared from the family for three days, called his mother “Woman” and don’t know what he did from 12 to 30, grew in wisdom and age or eloped with some girls? He  didn’t go to any school, not repoted.

Any imitators of Jesus?

From a purely human and rational perspective, Jesus started his public life with a wine party at the wedding in Cana,  besides going about healing the sick, doing good to the needy, he was known as a friend of drunkards and prostitutes and winebibber. The day before his crucifixion he threw another wine party called the Last Supper saying he will drink again only in heaven.

That was the main reason why CCV was urging Pope Francis, already from last February to do a cleansing of the temple, comparable only to the one he did in Chile because the clerical and Episcopal sex abuse surfacing in India and all around the world is only a tip of the iceberg  that sent the Titanic to the bottom of the sea. No one wants to see that happen to the Bark of Peter.

But in contrast to all bishops in India and abroad stands out Francis Pappa who put himself one step below the laity in the hierarchical caste ladder, to deserve the title “Servant of Servants,” and continues to call himself a “Sinner” while others call him “Your Holiness”. But in telephone conversations with youngsters in Turin and Milan  he told them to call him “tu” (you) in lower case because the Apostles called “Jesus” like that.

Will such a day come in the Catholic Church? No hope for us! That is why we call ourselves the “Cattle Calass” (travellers in the General Compartment, all floor sleepers with no berths, all equals on the floor with Jesus. For us that is the way to follow the Carpenter of Nazareth or the Everlasting Man, whether others see him as an ideal human or not.

For us He is the World Citizen par excellence and we want to be world citizens like him by going beyond any “Church citizenships” because all churches starting with the Catholic Church are Ghetto and not universal and all embracing  like the Son of Man, who alone is our model and leader.