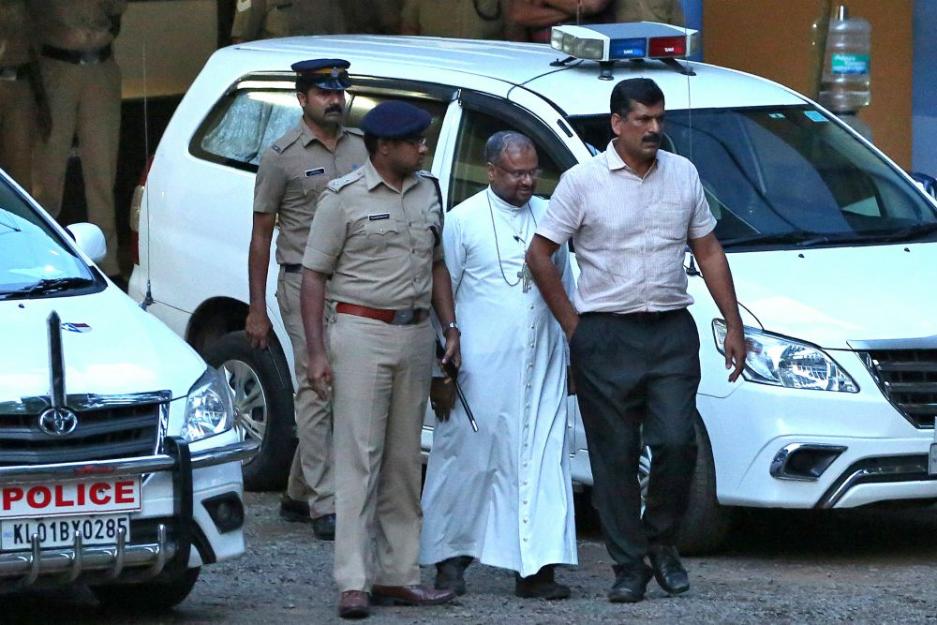 A PROJECT OF NATIONAL CATHOLILC REPORTER

Cover image:  Bishop Franco Mulakkal of Jalandhar, India, is led away for questioning by police Sept. 19 on the outskirts of Cochin. (CNS / Reuters / Sivaram V)

Bishop Franco Mulakkal of Jalandhar was arrested by Kerala police Friday, accused of raping a nun multiple times between 2014 and 2016. He is the first Catholic bishop to be arrested in a sexual abuse case against a nun in India.

The case emerged on June 28 when a member of the Missionaries of Jesus, a diocesan congregation under the Jalandhar Diocese, accused the prelate of subjecting her to rape and unnatural sex on 13 occasions over a two-year period at her convent in Kuravilangad, south of Kochi.

Television channels in Kerala reported that Mulakkal could not offer proper responses when the police presented documents contradicting his statements. The investigators noted that Mulakkal advised the congregation's leaders to take action against his accuser five months after she had complained to church authorities about the abuse.

After the arrest, Mulakkal was to undergo a medical examination and be presented to a local magistrate, who is expected to send him to police custody for further questioning.

A group of Missionaries of Jesus nuns who have held a sit-in at a busy intersection in Kochi since Sept. 8 in support of their sister applauded the arrest.

"We came to the streets only because we did not get justice from the church and the government," Sister Anupama, the nuns' spokesperson, told media representatives. The sisters, who have drawn support from various sections of society, said their strike would end with Mulakkal's arrest.

A biological sister of the nun accusing the bishop of rape who had joined the protesters recently with a hunger strike was sent to a hospital Sept. 19 as her health deteriorated.

[Jose Kavi is the editor-in-chief of Matters India, a news portal focusing on religious and social issues in India. This article is part of a collaboration between GSR and Matters India.]

A similar PRESS STATEMENT (given below) was also released on the same day i.e. 20th September 2018 by Cardinal Oswald Gracias, President of Catholic Bishops' Conference of India (CBCI).

In connection with the appointment of Auxiliary Bishop Emeritus Agnelo Rufino Gracias as Apostolic administrator of Jalandhar Diocese, Shri Kirit Macwan, noted Advocate of Gujarat High Court, through an email,  has put a Canonical poser to CBCI on the appointment to relieve Bishop Franco Mulakkal.

As per Apostolic Constitution, Apostolic Administrator can be appointed only for taking pastoral care of a diocese yet to be established : Canon 371-2 read with 1018. In case of vacancy of an episcopal see, Diocesan Administrator is to be elected by College of Consultors to govern the diocese for  time being. Canon 421.
Hence, in my candid opinion, appointment of retired Aux. Bp. Agnelo Rufino Gracias as Apostolic administrator of Jullandar diocese is not in consonance with Apostolic Constitution. Even in case of Baroda Diocese (Gujarat), retired A.Bp. Stanley Fernandes (85) is continuing as Apostolic Administrator since several years.
We expect rule of law in Mother Church.
CBCI may like to respond on this.
Kirit J. Macwan
Advocate
High Court of Gujarat
Ahmedabad.

Dr John Dayal replied to the above poser of Kiritji as follows:

"I thought the appointment was by Rome."

Did the Apostolic Nuncio and the Cardinal have an inkling that the Bishop would be arrested by the Kerala Police the next day 21st September 2018 on the third day of his interrogation after 22 hours of questioning?

"It has been decided to register the arrest of the Bishop. We reached a  conclusion that the complaints against the Bishop are reasonably true. Interrogation is over. It has been found that the Bishop has committed the offence. Other procedures will follow," said Kottayam S.P. Hari Sankar. (courtesy: Times of India Kochi 21-09-2018)

"It has been decided to register the arrest of the bishop. W ..

Read more at:
http://timesofindia.indiatimes.com/articleshow/65903607.cms?utm_source=contentofinterest&utm_medium=text&utm_campaign=cppst
"It has been decided to register the arrest of the bishop. W ..

Read more at:
http://timesofindia.indiatimes.com/articleshow/65903607.cms?utm_source=contentofinterest&utm_medium=text&utm_campaign=cppst
"It has been decided to register the arrest of the bishop. W ..