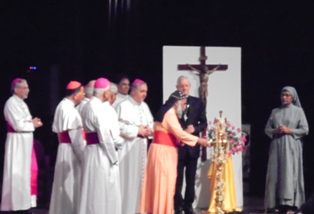 (Note: Sri Isaac Gomes loves to see you read this report with appropriate explanations along with. Like any other responsible meetings of the Bishops, it also is going to end up as a regular house meeting of the red belts. Comments from Isaac Gomes is underlined) Joseph Mattappally – asso. editor)

Bangalore: The Catholic Bishops’ Conference of India (CBCI) began its 32nd plenary with its leader stressing the need to spread Christ’s compassion in the country.

Some 180 bishops, priests, nuns and lay leaders (can they name the lay leaders and how many? )  are attending the 8-day assembly at St. John’s National Academy of Health Sciences, Bangalore, southern India.

The opening ceremonies on March 2 included a solemn Mass led by Apostolic Nuncio to India Archbishop Salvatore Pennacchio and an inaugural meeting. Cardinal Cleemis, who is the CBCI president, urged the prelates to uphold the sacredness of the family (a bunch of old bachelors who have not even washed a baby's nappy, sit in a board room to decide what couples will do in their bedrooms!).

The prelate, who heads more than 19 million Catholics in India, described consecrated life as a gift from God to the Church. Such a life, he added, helps the Church continue its mission in the country efficiently.

The prelate also noted that Pope Francis’s leadership has been inspiring the global Church. As part of the formal opening of the assembly, the CBCI office bearers lighted a lamp kept on the dais.

“The response of the Church in India to the present day challenges” is the theme of the assembly where Christian, Hindu and Muslim scholars will present papers for discussions in the coming days.

Archbishop Salvatore also delivered the homily at the opening Mass.

A message from Pope Francis was read out during the Mass (what is not mentioned is that the message after being read, was consigned to the waste paper basket).

Archbishop Donald Wuerl of Washington, who was the chief guest at the inaugural meeting, described Mahatma Gandhi as a symbol of social transformation and a gift to the world.(Mahatma Gandhi without mass support would have been ineffective – a naked fakir as George Bernard Shaw called him.  Similarly the Bishops and the Clergy without the Laity whom they are distancing every day, will be like loner kings in a cemetery).

In his biennial report, CBCI secretary general Archbishop Albert D’Souza noted that in the last two years the Indian Catholic Church “has seen much growth and stability” and has extended “support to the Universal Church.” (this is simply a cock and bull story.  Where is the statistics to justify this claim?)

“The inspirational and confidence building  (should read "Confidence shattering" ) role of the CBCI continues in the midst of many challenges,” the report said adding that “the motto ‘United in Witness’ (should read "United in Corruption and sex scandal") does help us to keep our goals of proclamation and evangelization.”

Referring to the issues and events in the country and the responses of the Church, the report stated that the government “under the influence of the fundamental ideology has weakened the secular fabric of the society.” (Why blame the Government? What keeps the Church from strengthening itself from within?  It is creating animosity among Catholic families by oral hire and fire in missionary schools, putting a stamp of lunatic on a senior teacher having two nursery school going kids and wife, in a reputed school in Park Street, Kolkata and throwing him out of school, in this Year of Mercy.)

The report also regretted that “the narrow understanding nationalism is another treat to our democracy.” (the same logic applies to the Church – of the Bishops' and Parish Priests' understanding of the Laity who are considered rank outsiders whereas they comprising 90% of the Church are the actual owners of the Church). ​

The chain of attacks on churches, especially the desecration of the churches in Delhi and vandalizing of them in Nadia and Agra also figured in the report (this is crying in the wilderness.  In a number of cases, it was the church caretaker and his allies, who were nabbed as cultprits!).

According to the report, the declaration of the “Jubilee year of Mercy” by Pope Francis is a powerful source for renewal of the Church. It has great influence on the Indian Church, it added. (Absolutely rubbish. The clergy is not practising the virtue of Mercy.  Ill treatment of teachers and workers inmissionary schools, oral hire and fire, closing down of active & vibrant lay units – Auxilium Parish Kolkata and may be other parishes too, putting a stamp of lunatic on a senior teacher having two nursery school going kids and wife, in a reputed school in Park Street, Kolkata and throwing him out of school.  Is this honouring the Jubilee Year of Mercy?)

The CBCI is also likely to have a full-time general secretary to be based at the CBCI Centre in Delhi.(Definitely it will be a priest who will singing CBCI song like a canary)!

The assembly will hear reports of activities from the offices and national centers of the CBCI before March 9. (No real actitivities?  Tell CBCI to show  at least one case of activity based on Sustainable Development Concept.  All they will present is mostly a mountain of PPTs and cooked up photos/events to justify utilisation of funds).

CBCI vice-president Archbishop Filipe Neri Ferrao of Goa read out greetings to the assembly from Indian President Pranab Mukherjee and two officials from the Vatican.