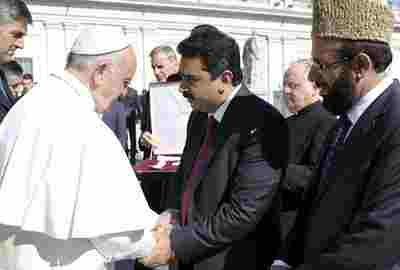 Catholics not sure where or when Francis will visit as papal visit will require extensive security measures.

Pope Francis has accepted Prime Minister Nawaz Sharif's invitation to visit Pakistan later this year, according to official media.
Federal Minister for Ports and Shipping Senator Kamran Michael, a Catholic, and Federal Minister for Religious Affairs Sardar Muhammad Yousaf called on Pope Francis at the Vatican City on March 2, reported state-run Associated Press of Pakistan (APP) news agency.
Pope Francis also held a special prayer for the victims of terrorism and their families during the meeting, APP added.
Bishop Rufin Anthony of Islamabad-Rawalpindi said the possibility of Pope Francis coming to Pakistan was very good news.
"The minority Christians will be definitely encouraged," he told ucanews.com. "However the security of the Holy Father will be sole responsibility of the government."
Father Saleh Diego, director of the bishops' National Commission for Justice and Peace in Karachi Archdiocese, is thrilled at the prospect of a papal visit.
"This is totally unexpected. Our joy know no bounds ever since we heard about it," Father Diego said.
"The pope might tie up his visit with his tour to India slated for 2017. However this is a big risk for the government as things are different than they were when Pope John Paul II had visited Karachi in 1981," he said.
Saint Pope John Paul II who celebrated Mass at National Stadium in Karachi during a three-hour stopover, has been the only pope to visit Pakistan. A small bomb exploded outside the stadium minutes before his arrival.
Father Diego said that since then security concerns in the south Asian nation have been dire, with thousands of people being killed in terrorist attacks.
"The Taliban are still targeting institutes and intolerance is generally prevalent in the society," he said.
Father Morris Jalal, founder and program director of the Lahore-based Catholic TV, said the acceptance of the prime minister’s invitation by the pope was a diplomatic courtesy.
"We are still not sure whether or when he will be visiting Pakistan," Father Jalal said. "Such a mega event would require serious meetings with bishops and a critical review of the situation on ground."
Source: UCAN