Segregation of Dalits and Blacks 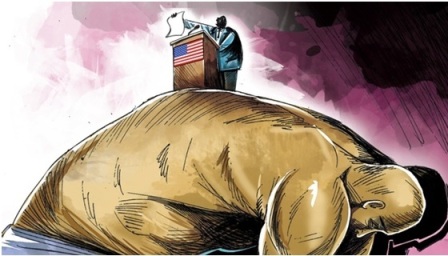 (Note: Segregation and ill treatment of weaker sections of society is the common feature in all barbaric cultures where might is right. It should have no place in civilized societies like America and India. But the fact is that large sections of these two largest and oldest democracies still remain uncivilized. In India it is called Caste system with 4 upgrading or degrading steps – Brahmins, Shetriyas,Vaisyas and Sudras — with religious sanctions and approved by Manu Smriti. In America, it is just skin deep “Colour Caste” dividing people into black and white. While studying journalism in US I even wrote an assignment comparing the two.

There is no use trying to prove which country is better. It would be like pot calling the kettle black. Both countries have miles to go to get rid of either the caste-phobia or black-phobia. Just think of  the atrocities committed daily on Dalits by “holy, enlightened people in holy places” in India or the shootouts of blacks in US for being black, nothing else in Orlando, San Bernadino, Dallas etc. Both our democracies have to simply weep and hang our heads in shame before a world which we choose to describe as less civilized.

According to a Guardian study, 1,134 blacks were killed at the hands of police in the US in 2015. Similar is the number of dalits ruthlessly trampled underfoot in India by the well-to-do and powerful. In olden days these atrocities were done and none spoke against it. Today whenever they are done and when brought to public notice action is taken against culprits most of the time. That is, the mindset of society is changing from approving, to questioning, to condemning to creating social uproar to taking stern action against culprits. Let us all help to speed up this change. james kottoor, editor)

Every time I hear about atrocities on Dalits, I feel ashamed. In spite of hundreds of years of social reforms, the Hindu society continues to be plagued by this scourge. I am also disgusted by the sheer hypocrisy on the part of the US when it pontificates India on the issue of ‘tolerance’ and treatment of its weaker sections (read Dalits), following any such unfortunate incident. Once again, the US seized an opportunity to lecture India.

Following the inexcusable flogging of four Dalit youths at Una in Gujarat recently, America promptly expressed concern over ‘rising intolerance, violence’ in India. High decibel reactions, bordering on outrage, about caste-related violence in India on the part of the US are surely not borne out of its genuine concern for Dalits. The US commitment to ideals such as human rights, rule of law and democracy is confined only to whites within the American borders.

The US has frequently joined hands with ruthless despots. It has been in cahoots with the military dictators of Pakistan and the Communist regime of China. The record of both these countries on the issue of human rights and dealing with their intellectuals or religious minorities is gloomy. The US treatment of prisoners at the Guantanamo Bay detention camp puts its record on human rights at par with Stalin’s Soviet Union. In a 2005 Amnesty International report, the facility was termed ‘Gulag of our times.’ In 2006, the United Nations called unsuccessfully for the Guantanamo Bay detention camp to be closed. In spite of world-wide protests, the camp continues to function with all its horrors.

And what’s America’s report card in dealing with its own people?  According to a Guardian study, 1,134 blacks were killed at the hands of police in the US in 2015. The study reveals that young black men were  ‘nine times more likely than other Americans to be killed’ by police officers. Paired with official government mortality data, about one in every 65 deaths of a young African-American man in the US is a killing by police.

There are historical reasons for the American establishment (dominated by whites) bias against blacks. Most Africans were forcibly brought to and held captive in the United States from 1555 to 1865. The Declaration of Independence, a document that would become a manifesto for human rights and personal freedom in the US, was written by Thomas Jefferson, who, ironically himself owned over 200 slaves!

The slave owners and traders frequently quoted the Bible to justify their inhuman acts against blacks. The holy book has no specific condemnation of slavery. The Old Testament presents guidelines for slave holders. The New Testament describes the relationship between master and slaves. For example, here is an advice rendered to slaves in the Bible — “Servants, be obedient to them that are your masters according to the flesh, with fear and trembling, in singleness of your heart, as unto Christ.” (Ephesians 6:5). There are several other verses in the Bible which endorse slavery and define relationship between the slaves and their masters. Exodus 21:2-6, 21:20-21, Colossians 4:1, 3:22, Leviticus 25:44-46 and Peter 2:18-21. Of course, there are also verses in the Bible which have been used to justify the abolition of slavery.

While deliberating atrocities on Dalits in India, invariably incidents from Hindu tradition, such as killing of Shambook by Lord Rama or ace archer Eklavya of Mahabharata losing his thumb at the instance of Guru Dronacharya are mentioned. Manu Smriti is often quoted and blamed for providing philosophical basis for discrimination against Dalits. Copies of this scripture have been burnt publicly. In the course of any serious study of black problem in the US, the intellectual paradigm which sustains anti-American-African mindset, has to be discussed.

The over-reaction on the part of America to the incidents involving Dalits in India has to be seen in the historical context. After the East India Company set its shop in India, British officials came to accept missionaries as partners in the ‘noble task of shouldering the white man’s burden.’ A section of the US establishment still suffers from this colonial mind-set. Moreover, Church has a considerable amount of influence on American administration and it continues with its insidious agenda of evangelisation.  Even minor incidents of violence against Dalits are blown out of proportion with active help from those in India who are committed to evangelisation and breaking up of Hindu society.

In America, atrocities against Blacks are mostly committed by law enforcement agencies and ruling establishment. Such is the power of white racists in the system that even those police officers who kill unarmed innocent blacks seldom get punished. In India, Dalits are mostly targeted by individuals and  once the incident becomes public, the system (including political class) comes down heavily on the guilty.

Powerful voices from within the Hindu society have been fighting against this social evil for centuries. The struggle has not been in vain. The Constituent Assembly provided for reservations for Dalits. Subsequently, Parliament enacted stringent laws to end atrocities against Dalits. Today, none defends discrimination against Dalits on an intellectual level. However, in practice, the evil does exist. Laws, however harsh, have limited capacity to eradicate any vice. If that was not so, crimes such as dacoity, rape, murder or prostitution would have disappeared long back. Increased social awareness is the answer. (Balbir Punj is a former BJP MP and a Delhi-basedcommentator on social and political issues.Email:punjbalbir@gmail.com)