PANEL DISCUSSION ON ROLE OF RELIGION AMIDST GROWING COMMUNALISM & FUNDAMENTALISM

In John Chapter 14, Verse 27 Jesus tells his disciples: “Peace I leave you, my peace I give to you.”  Amidst conflict and chaos, Covid-19 being one of them, the whole world today is desperately in search of “Peace” just as a stranded traveller looks for water in the midst of a desert.

It is on this topic of peace, the Commission for Dialogue – Archdiocese of Calcutta, in collaboration with the Rotary Club of Calcutta, Nabadiganta, conducted a path-breaking Webinar, on 8th January 2021 (18:30-20:30 Hrs) at the expansive residence of Mr Syed Irfan Sher, President of Rotary Club of Calcutta, Nabadiganta.  The theme was “ROLE OF RELIGION AMIDST GROWING COMMUNALISM & FUNDAMENTALISM.”  A similar event on the same theme was held at Praggaloy, Barasat on 7th January at 3 pm in the presence of Archbishop Thomas D’Souza.

Mr Irfan set the ball rolling by extending a warm welcome to all the eminent speakers on the panel (given below).  He said we all crave for peace and it is here religion plays a vital role in removing our negativity.  He said the name Nabadiganta means new horizon and expressed the hope that after the evening’s event we will see a new horizon of living in love, peace and harmony. 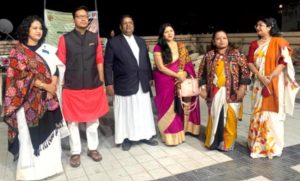 Mrs Bulbul Kundu (President Rotary Club Kolkata Majestic – Left in above photo) set on the sombre spirit of the occasion by her lovely rendition of two bhajans (Rabindra Sangeet).  Thereafter, Bhai Satvir Singh and his group sang a very meaningful Kirtan to enthral the participants.

The keynote speaker, Dr Fr M.D. Thomas, Founder Director of Institute of Harmony and Peace Studies, New Delhi, began by thanking the Commission of Dialogue -Archdiocese of Calcutta and the Rotary Club, Nabadiganta for jointly organising this unique event. He complimented Fr Sunil Rosario and Mr Irfan for bringing people together which was Providential.  He said merely going to religious places is not practising religion. True religion is fellowship which is going out, meeting people of all hues & colours, share their concerns and look out for ways & means to alleviate their problems.  On Communalism and Fundamentalism, he said it’s time we grew up, came out of our habit of sitting on the fence and called a spade a spade – violation is violation – through Advocacy and the Might of the Pen. He said Communalism and Fundamentalism are growing and becoming a matter of great concern.  In terms of threat, Communalism and Fundamentalism were much more lethal viruses than Covid-19.  He said India is a great country but most citizens are gullible and falling a prey to the evil designs of the perpetrators of Communalism and Fundamentalism to discriminate, divide and rule. According to him Communalism and Fundamentalism are the incarnation of the Devil to monopolise the truth, discriminate, divide and rule on the basis of caste, creed, colour and gender. He said there is nothing called “My God and Your God.”  The human instinct to survive is natural but the instinct to dominate a large majority in a pre-planned multidisciplinary manner through education, employment and society is criminal and breeds authoritarian dictatorship. According to him Communalism and Fundamentalism operate through triple methods – Political (addiction to power), Economic (Addiction to money) and Religious (Addiction to so-called God). He warned the two viruses are eating us up and need to be eliminated mainly through love, faith and respect for one another.  He ended by quoting John F. Kennedy “What unites us is far better than what divides us.” 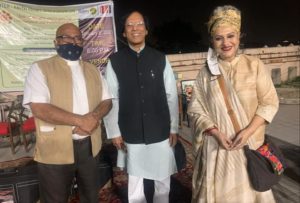 (Dr Fr M.D. Thomas in the middle and Ms Alokanda Roy on the right)

Ms Alokananda Roy – noted dancer and exponent on Bengali culture said her religion is Dance through which she has converted many prisoners into expert dancers and thus transformed their lives into lives of dignity.  She said she is popular in the jail circle as Jail Janani  (Mother of jailbirds). 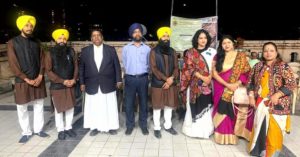 Noted journalist Mr Avtar Singh (4th from left after Fr Francis Sunil Rosario) said communalism and fundamentalism are not two separate entities, they are two sides of the same coin. He said to put an end to the two viruses, we must first look into ourselves. 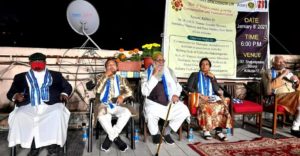 Mr O.P. Shah, Chartered Accountant,(extreme right, after Professor Professor Naamrata Kothari)   who was full of zest, suggested two antidotes to combat the poison of growing Communalism and Fundamentalism. These are: (1) We must inculcate a scientific temper and (2) Securalism must be  practised both in letter and in spirit.

Note: Readers may go to the links given below to listen to some of the above speakers.