Men of prayer=godmen? India land of godmen and fake divines? 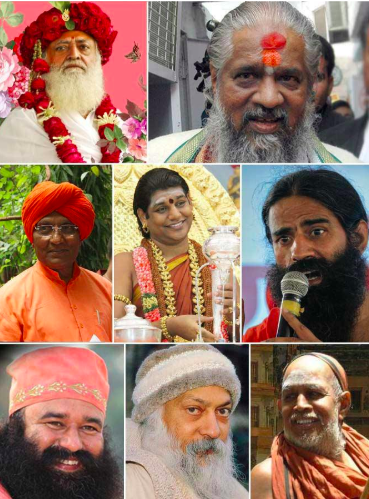 India is known as the land of gurus, religious leaders and god-men of all variety from time immemorial. What is the outstanding trait of a religious leader, a god-man? He should be a man of prayer, concerned mainly with spiritual and heavenly things busy sharing the fruits of his contemplation —  peace, joy, love and care with those suffering in this vale of tears, the poor and needy deprived of the  basic needs for one’s survival.

These God-men are looked up to by all sections of society, in spite of the fact there are any number of godmen of ill-repute exploiting the ignorant and weaker sections, especially women and minors. They hog the lime light. Still they are constantly visited and cultivated by politicians for the sake of vote bank politics.

Who meddle in politics?

This being the case what is the point in saying, god-men should not enter or meddle in politics. It is not godmen, but politicians who meddle with god-men and give them a hell of time beseeching their blessing especially at election time. Haven’t you seen them all during the Karnataka election time? So it is most absurd of complaints an enlightend politician can make.

But strangely two godmen, both of very good repute, Archbishop Thomas Macwan of Gandhinagar, Gujarat, last year and Anil Couto of Delhi, recently, have been making big headlines for praying and requesting people to pray and work for the dawn of a fault free secular democracy of justice, freedom, fraternity, unity, universality and collaboration between the haves and have-nots.

Instantly I thought of our great poet and philosopher, saintly Rabindranath Tagore and his subline soul nourishing prayer for the country: “Where the mind is without fear, the head is held high, into that heaven of freedom, my Father, let my country awake!” Wasn’t he implicity confessing, his country was filled with fear and oppression then? And what about the times we live now?

Aren’t we living in times when too many sections of people in India, especially the minority communities and dalits, living in fear and trembling? Many have been commenting on the godmen’s prayer and fear. Fr. Thelekat editor of Sathyadeepam and former spokes person for the Syromalabar Church wrote an elaborate piece yesterday in Mangalam daily. He asks a pertinent question: who has taught us to hate Muslims?

He cites statistics saying, some 25 persons were killed in recent years by cow protection brigage and 21 or them were Muslims and from many quarters we hear: “Muslims go back to Pakistan!” What? What about those born and  brought up in India the land of Gandhi and Tagore? Will they ask them to go back?

Telekat points out some 240 churches in Delhi had to be given special protection from wandelisers in 2014-15 and asks: Who created such an atmosphere of fear and trembling for the minority Christians there? And it is not rarely that we hear of attacks against churches and pastors in many parts of India. Was this the India of our dreams, of our forefathers, the India of unity in diversity we used to speak proudly of when there was no one to constantly din into our ours of “Acche Din” even as we are forced to gulp down bitter days?

Hypocrisy: what is it?

A columnist started off his analysis of the years of BJP   rule with the quote from Edmund Burke famously proclaiming: “Hypocrisy can afford to be magnificent in its promises, for never intending to go beyond promise, it costs nothing.” Any better description of BJP years? Then he cites litany of unfulfilled promises like “depositing 15 lack  in every Indian’s bank account (fortunately the majority didn’t have a bank account then) and now the pittance the have-nots put in, Nirav Modi flew abroad with.

Only don’t call any reigning politician  or a rude godman a “hypocrite” if you wish to be in their  good books. What happened to crazy Christ will happen to you. Commenting on it this crazy scribe wrote  long ago: “If only the crazy Christ had kept his blessed big mouth shut he would have lived a thousand years and not died so young.”

One has to be diplomatic in politics and say only what pleases all. That is why diplomacy is defined as “Keep firing even when you are out of all ammunition!” and no one is going to be hurt for sure. Unfortunately good souls like Archbishop Couto, Macwan  and those who support them are not diplomats according to the humble opinion of this scribe. Diplomats are neither hot nor cold and therefore fit only   to be spit out as time servers in the dust bin of history.

Are we therefore suggesting that  prayer is the Panacea for the turbulent times of winning elections at any cost, by hook or crook, India is going through? Not in the least! What about the multitude who don’t believe   either in prayer or religion or God?

For them prayer is at best a pain killer, that communist opium and substitute for religion. They go on working harder and harder to build the workers’ paradise and the tower of babel eluding their efforts to touch the heaven’s surface  as the shadow eludes the grasp of anyone chasing it.

Believers instead have to go on praying and praying as if everything depended on God finally hoping against hope only to die in despair. End is going to be the same for both while each indulge in the pass time of pot calling the kettle black.

The doubting Thomases still go one step further, to touch and see what lies beyond the grave to  disprove what some call the perennial truth: “Homo humus, fama fumus, finis chinis” (Man is mud, fame is smoke and end is ashes!) for both believers and unbelievers!