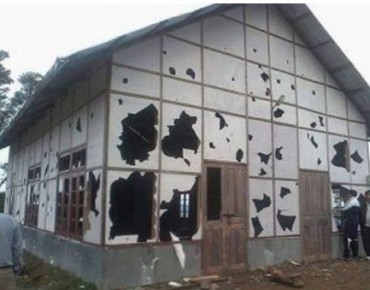 Aizawl (Matters India): An angry mob on Tuesday night attacked a church constructed on a plot at Bawngkawn Brigade Land, which is in dispute between the Baptist Church of Mizoram (BCM) and local council of Bawngkawn.

The church, made of tiles, was not badly damaged.

“The local council of Bawngkawn made an announcement from the local information centre around 6:00pm asking all residents of Bawngkawn to come out of their houses to discuss an ‘important issue’. An hour later, a large number of people moved towards the church and attacked it with stones,” Dr Lenghaia, chairman of Bawngkawn unit of BCM, stated in his FIR to Bawngkawn police station.

As he had sensed trouble, he had verbally requested the Bawngkawn police OC around 5:00pm, to give protection to the church, the church chairman said in his FIR.

Almost the entire area of Brigade Land, on the northern outskirts of the city, is under dispute between private land owners and the Mizoram government when the Indian Army handed it over to the state government recently after it occupied since the outbreak of insurgency in Mizoram in 1966. It has been found that many individuals had land passes (issued by then village council) in this area.

The land on which the church was constructed was also owned by an individual who then sold it to the Baptist Church of Mizoram early this year. However, the local council of Bawngkawn submitted a written complaint to the state land revenue & settlement department, as the local legislator had verbally agreed the Bawngkawn local council’s proposal to construct an indoor stadium on it. The director of the land revenue & settlement department, then stayed the church building construction.

The state government held that land passes issued by concerned village council/local council for agricultural purposes are periodic patta and cannot be treated as pucca patta (land settlement certificate) issued by the land revenue department. However, a large number of such periodic pattas had been transformed into pucca patta, reported The Northeast Today.

The Baptist Church also claimed that the land on which the church was constructed belonged to one Kapthanga, who transferred the village council pass into a permanent land settlement certificate. Kapthanga had already received rents from the India Army, which clearly suggested that the land pass was accepted by the government.

However, the church went to the court claiming legitimate ownership of the land. The senior civil judge in Aizawl district court, taking cognizance of the church’s appeal, summoned the state government to appear before the court. The judge also nullified the land revenue & settlement director’s stay order.

The church chairman, in his FIR to police, stated that as worship services were conducted with the consent of the court, the attack on the church was a contempt of court and demanded arrest of the culprits behind the Tuesday night’s vandalism. He also prayed for 24-hour police surveillance as the locals warned that church would be burnt down it is not dismantled within three days from today.