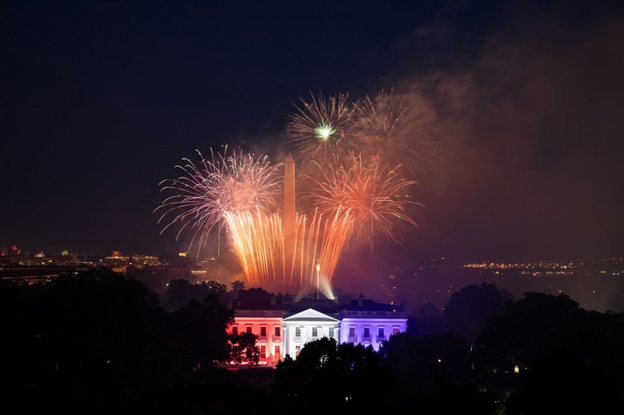 e history of the United States, there are times when the passing of a single year has witnessed enormous, and often threatening, changes Barber).Fireworks appear above the White House North Portico, lit in red, white and blue lights, July 4, 2020, during the Salute to America Fourth of July celebration. (Official White House photo/Keegan.

If July 3rd Thorana, the feast of doubting Thomas, is too important for Kerala’s St.Thomas Christians, July 4th  is even more important for world’s oldesr Democracy in America.  To see all the implications please read the article below.

First a word on Thorana.Since several years, 3 July has been a significant day for the Christians of India ‘Indian Christian Day’ (Yeshu Bhakti Divas). It is the Feast of St Thomas the Apostle – one of the twelve disciples of Jesus. He came to India after the Resurrection of Jesus, around 52 AD. It is historically accepted that St Thomas was martyred near Chennai in 72 AD;  his martyrdom is commemorated on 3rd July. I have been studying and working in Chennai for 15 years.

The coming of “doubting Thomas” to India is questioned even by Popes. But this writer visited 7 churches, reportedly  built by St. Thomas as a fact finding mission, while editing the New Leader in Chennai. What I found as living traditions are hard to reconcile with the deniers at the Vatican, Let that controversy continue!

The initiators of this day (Thorana july 3rd) are also unequivocal in their invitation to all women and men of goodwill who would like to join in the celebration of the person and message of Jesus. As one of them states, “in these challenging and difficult times: the world needs more than ever the compassion, the mercy and the courage to stand up for the least, the lost and the last which Jesus radiated all through his life on earth”

As for July 4th  the importance is all connectd with the Oldest Democracy in the US. Its writer  Michael Sean Winters traces is roots to  1941, July  4,

On 4 July, 1941, with most Americans eager to avoid getting dragged into World War II, no one knew that the Japanese empire would attack the United States Navy at Pearl Harbor the following December, or that by July 4, 1942,  July 4, 1860, then on to Trump era and the comment: Trump made Nixon look clean.  You are welcome to draw your own conclusion.

In any case the cmment of Winston Churchil is wrth pondering over: "Many forms of Government have been tried, and will be tried in this world of sin and woe. No one pretends that democracy is perfect or all-wise, Indeed it has been said that democracy is the worst form of Government except for all those other forms that have been tried from time to time."   james kottoor (Chicago) editor CCV,

Please read below our columnist Sean Winters! This Fourth of July, let's see if we can keep our democracy!

On July 4, 1929, no one knew that the stock market would crash, starting a chain reaction of economic calamities that would become the Great Depression.

On July 4, 1860, the Republican convention had already nominated Abraham Lincoln and the Southern states were threatening secession should he win, but no one knew for sure that one year later, the Civil War would have begun, mobilizations enacted, and the days to the first, bloody Battle of Bull Run increasingly few.

And on the July 4 that we commemorate, in 1776, most of the newly minted citizens of these free and independent United States of America knew a British attempt to take New York was imminent, but they had no idea that it would be such a disaster for the war effort by that by year's end, a daring attack on Trenton, New Jersey, would result in the first significant victory for the troops serving under Gen. George Washington.

One year ago, the struggle against the pandemic was still in its early stages. Work had begun on vaccines, but there was no assurance they would be effective. With the warm weather and increased knowledge about how the virus spread, people felt free to gather in small groups outside. Mass had begun again, but people sat in every third pew to achieve adequate social distancing, we had to wear masks, there was no singing, and volunteers had to disinfect the pews after each service. Today, while the emergence of new variants looms and the failure of too many Americans to get vaccinated shocks, our civilization does not seem as imperiled as it did one year ago.

One year ago, we knew that then-President Donald Trump had no compunction about desecrating the cultural norms that had come to surround our democracy: He insulted the press, he lied to the public (and more, way more, than most politicians lie), he tried to get the Department of Justice to function as his own private legal team. Trump made Nixon look clean.

But we did not know, and could not have known, that Trump would try and undermine the results of an election. And try he did. But for the courage and integrity of state election officials like Georgia's secretary of state, Brad Raffensperger, he might have succeeded. It still sends a shudder down my spine when I listen to the recording of Trump's call to Raffensperger, when he tried to convince him to find enough votes to change the result.

States in which Republicans control the levers of government are now trying to rig future elections in ways that are truly frightening. The thing about democracy is that it presumes those who participate in it do so in good faith, that everyone is playing by the rules, that no one is trying to subvert it. That presumption is now in doubt in a way it has not been since the Civil War. Is it time to start asking if the American equivalent of the Reichstag is on fire?

We Americans grow up thinking we are on a path that leads onward and upward. Our language invites us to think in a linear fashion, and when you toss in the legacy of Whiggish utopianism and the mythology of the American Dream, we never stop to think that things might not get better. They might get worse. Things that seem stable might collapse. Freedoms we enjoy might be snatched away. Our military, so strong and capable, is not suited for confronting internal threats.

Democracy is not for idealists. It does not guarantee it will confer peace and plenty on those who live within its reach. It is built on the narrowest of ideas, the belief that half the people will be right more than half the time. That is why it has always been important for Americans to have a rich civic life. Alas, it has been 21 years since Robert D. Putnam published his book Bowling Alone. We are still bowling alone, and in many parts of the country, the bowling lane has shut down.

I do not wish to try any other form of government. On this Fourth of July, it is my fervent hope that enough Americans will care to avoid putting that equation to the test, that our democracy will last a while longer, and that all of us will remember to do our bit to bolster and cultivate those habits of mind and commitments of heart that will keep it going.