How to fight for the full Truth? There is freedom, But no Mercy! 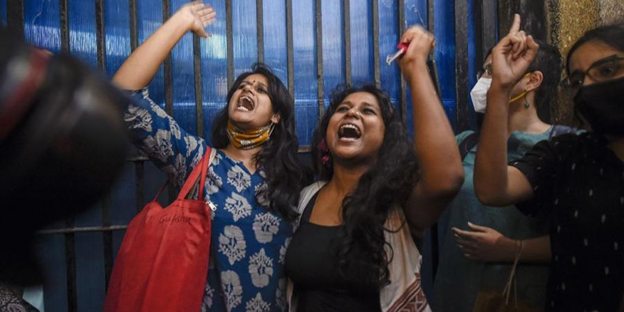 People are getting arrested as in the days of Indira Gandhi’s Emergency. Student activists Natasha Narwal, and Devangana Kalita outside Tihar prison, after a court ordered their immediate release in the north-east Delhi riots 'conspiracy' case, in New Delhi.
TJ

S George is a very thought-provoking columnist. That is why we feature him often in CCV. He writes:

“People are getting arrested as in the days of Indira Gandhi’s Emergency. Fear is a reality. …Ordinary criminals are not seen as a threat. For those who wield power, poets are the threat!”

“This half-half reality is the defining feature of Narendra Modiji’s India.”

The question is, how to help MODI SARKAR find the FULL TRUTH and make his RULE beneficial to the whole nation. He gives many other instances, in his article. We don’t go into each,

We suggest, you concerned readers, go into instances cited and suggest ways to make Modi-Sarkar most beneficial to all, james kotoor(Chicago) editor CCV.

People are getting arrested as in the days of Indira Gandhi’s Emergency.

In a country as populous as India, half the people can take their freedom for granted Freedom is a funny thing. When it is there, we don’t notice it. When without knowing that the other half is denied basic freedoms.

This half-half reality is the defining feature of Narendra Modiji’s India.

People are getting arrested as in the days of Indira Gandhi’s Emergency. And, as in those days, people know only bits and pieces of what is happening. Fear is a reality. The public has no way of knowing how many poets, professors and pundits are in prison. Ordinary criminals are not seen as a threat. For those who wield power, poets are the threat.

Not surprisingly, the weapon of FIR was used frequently against Muslims. Twitter responses summed up the reaction when one said: “And then they came for the poets as mass murderers roamed free.” Another put it more pungently: “Here goes fascism for you, you may call it patriotism. The lynch mob is free while the poets will be hounded.”

The lynch mob was vicious when it hounded poet Varavara Rao. The world knew about it only when serious medical problems developed as a consequence of his life in jail and the authorities were forced to move him to hospital. He had spent more than seven months in Taloja Jail, the notorious “glamorous” jail in Mumbai. Why? Because he wrote lines like: “The foe fears the poet/Incarcerates him/But already the poet in his notes/Breathes among the masses.”

As a result of the foe’s fear, there were activists who found themselves in jail, not for breaking the law, but for offending those in power. They were men and women who came from different backgrounds and nursed different ambitions. Among them were young Delhi University students who started the brave Pinjra Tod (break the chain) movement. Devangana Kalita and Natasha Narwal were PhD scholars at Jawaharlal Nehru University. Their arrest was resented by the student community which issued a statement “appealing to all democratic-minded citizens to remain vigilant and strong in our struggles in face of this repression.”

Kafeel Khan, a popular doctor, was jailed because he made fun of Amit Shah’s citizenship amendment games. In Jammu and Kashmir, the Abdullahs were silenced with house arrest.

The case of Stan Swamy is, perhaps, the saddest and also the most illustrative of government high-handedness. A priest-turned-tribal activist, Swamy spent more than seven months in jail. No court ordered his imprisonment; he was not even produced before any court. Yet, he was kept in jail in inhuman conditions. When he entered prison, he “was able to eat, take a bath, read, go for a walk.” Jail changed all that.

“Taloja Jail has brought me to a situation where I can neither write, nor go for a walk by myself. I am requesting you to consider why and how this deterioration of myself happened.” He was, subsequently, shifted to hospital on the orders of the High Court.

How many knew about the incarceration of Delhi University Professor Hany Babu in connection with the so-called Bhima-Koregaon case. (A Pune Conclave in December 2017, which, police said, triggered violence between Dalits and upper castes. Dalit leaders were arrested. Brahmins who attacked them were not touched.)

The Bhima-Koregaon arrests brought discredit to India. More than 50 Nobel laureates, MPs and professors joined civil society organisations to send a letter to the Indian Government demanding release of those arrested. It turned out that an “unknown hacker” had planted more than 30 documents on a laptop belonging to an activist who was accused of terrorism. Among these was one that outlined plans to kill Modi.

Who plotted this? Who was trying to project Dalits as dangerous and upper castes as harmless? Who was keen to show that Modi was under assassination threat? Who calculated that talk of assassination would produce a sympathy wave in favour of Modi?

When sympathy waves do arise, how beneficial are they? Some of the world’s most admired leaders were assassinated — Lincoln, Kennedy, Martin Luther King, our own Gandhiji. Were any lesson learned from these tragedies? Freedom might be a funny thing, but the message conveyed by these incidents is not funny. The message is that leaders play games with the state. All of them win in one way or another. It’s the people who lose. They are at the mercy of a class of people famous for not knowing the quality of mercy.