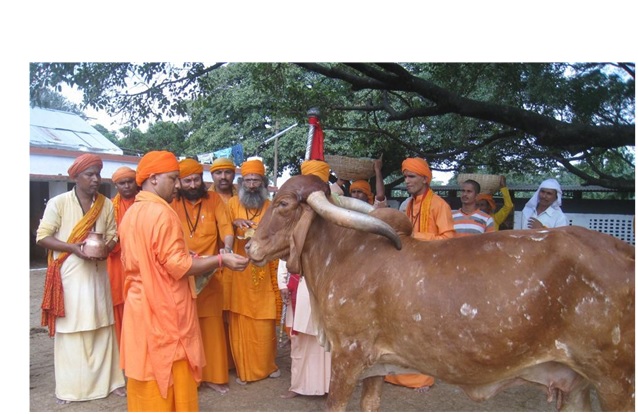 RSS chief Mohan Bhagwat may have called for a nationwide ban on cow slaughter only now, but the rot had set in much earlier

Cover Photo: Uttar Pradesh chief minister Yogi Adityanath feeding cows at Gorakhpur. One of the private member’s bills that Yogi Adityanath had introduced in Parliament includes one seeking a nationwide ban on the slaughter of the ‘cow and its entire progeny’. (HT file photo)

(Note: In the context of RSS chief Mohan Bhagwat’s call for a nation wide ban on cow slaughter this article provides a birds eye view of what the government of India from Nehru thought of it. Nehru, the first PM thought of ban on cow slaughter “nonsensical, unimportant, reactionary” and was ready to resign than say ‘ok’ to it. Indira Gandhi’s initial view was there cannot be a ‘legal ban’. But the appeasement of the Hindu majority by vested interest groups continued.

By 1982 fourteen CMs were persuaded to enforce ban on cow slaughter in letter and spirit. Now Subramaniam Swami wants the ban to enforced on a national level quoting Gandhiji. But Gandhi was all for honouring and worshiping cow and eating its flesh but against a ban on religious grounds, as no religion should impose its tenets on others, as pointed out by Harsh Mander the writer of this article. james kottoor, editor)

The powerful RSS chief Mohan Bhagwat has called for a nationwide ban on cow slaughter, describing this as a ‘sacred duty’, and adding that in states where the RSS has dedicated swayamsewaks in power, strong laws are already in place.

In 1954, when Congress MP Seth Govind Das moved a resolution in the Lok Sabha for a total ban on cow slaughter, Prime Minister Jawaharlal Nehru reacted with acerbic firmness — as he did against all forms of religious fundamentalism — declaring ‘I would rather resign than accept this nonsensical demand’. He warded off similar demands from the President of India Rajendra Prasad, dubbing banning cow slaughter ‘unimportant and reactionary’. We have travelled a very long way as a nation since then.

However it must be admitted that the rot had set in much earlier. Congress chief minister Sampurnanand of Uttar Pradesh in 1955 introduced a law to ban cow slaughter in open defiance of Nehru’s explicit wishes. Nehru described it as a ‘wrong step’, but the law was possible because cow slaughter prohibition was included under the Directive Principles of an otherwise progressive Constitution. Nehru and Ambedkar had themselves reluctantly compromised by allowing this, only ensuring that the language of Section 48 did not justify the proposed ban on the grounds of respecting majoritarian Hindu sentiment but instead the alleged imperatives of scientific animal husbandry.

Socialist Jayaprakash Narayan in 1966 wrote to Prime Minister Indira Gandhi seeking a ban on cow slaughter, declaring ‘I cannot understand why, in a Hindu majority country like India, where rightly or wrongly, there is such a strong feeling about cow-slaughter, there cannot be a legal ban’. Indira Gandhi refused then, resisting a nation-wide agitation by many Hindu organisations. But in 1982, in line with many steps to appease Hindu religious sentiment, she wrote to 14 Chief Ministers urging that the cow-slaughter ban be enforced in letter and spirit, and not allowed to be circumvented deviously. Prime Minister Morarji Desai had earlier admitted a move to bring a national cow-slaughter ban into the legislative competence of the central government.

Today most states have passed laws that prohibit cow slaughter, except Arunachal Pradesh, Meghalaya, Mizoram, Nagaland, Tripura and Lakshadweep; Assam and West Bengal permit the slaughter of cows over ages of 10 and 14 years respectively. India Spend estimates that 99.38 per cent of the country’s population is covered by cow slaughter laws. Laws banning cow slaughter in nearly half of these states are roughly 50 years old, enacted during the tenure of the Congress. Election speeches are today laced with innuendos attacking the ‘pink revolution’ of an alleged surge of beef exports.

The Haryana government has even created a uniformed police force unit for cow protection. The Gujarat legislature recently approved life imprisonment for killing cows. UP Chief Minister Yogi Aditynath had as an MP introduced a private member’s bill in Parliament seeking a nation-wide ban on cow slaughter, and his first major drive in office has been in closing numerous abattoirs, casually imperilling the livelihoods of tens of thousands. BJP MP Subramaniam Swamy has introduced a bill seeking death penalty for those convicted for cow slaughter.

It is particularly unfortunate that Swamy invoked Mahatma Gandhi while seeking capital punishment for those who kill a cow in this proposed law. There is no doubt that Gandhi was deeply devoted to the cow. Gandhi said he would ‘defend its worship against the whole world’, that cow worship is central to Hinduism, and even that she is superior to our biological mothers. ‘Our mother, when she dies, means expenses of burial or cremation. Mother cow is as useful dead as when she is alive. We can make use of every part of her body – her flesh, her bones, her intestines, her horns and her skin.’ But still he stoutly opposed a legal ban on cow slaughter. ‘I have been long pledged to serve the cow but how can my religion also be the religion of the rest of the Indians? It will mean coercion against those Indians who are not Hindus. We have been shouting from the house-tops that there will be no coercion in the matter of religion.’ To therefore appeal to Gandhi while advocating a nationwide ban on cow slaughter with death for those who defy the ban is disingenuous and unjust. He was very clear that to impose such a ban on non-Hindu Indians would amount to bullying by the majority which would run counter to the spirit and the promises of the freedom struggle, that India would belong equally to all regardless of their faith, caste, gender and language.

The gentle cow is no doubt beloved to millions of Indians. But the campaign today that claims to defend her has nothing to do with love of any kind. The cow is just recruited as another highly emotive symbol to beat down India’s minorities into submission and fear. Other symbols are a grand Ram temple to replace a medieval mosque, charges that Muslim men are sexual pillagers and reproductively irresponsible, scaremongering of a Muslim population explosion, allegations of their sympathy for terror, demands for curtailments in Muslim personal law, and claims of runaway Christian evangelism. It is instructive to look at four private member’s bills that Yogi Adityanath had introduced in Parliament.

Apart from the one seeking a nationwide ban on the slaughter of the ‘cow and its entire progeny’, another sought to amend the Indian Constitution to replace ‘India, that is Bharat’ with ‘Bharat, that is Hindustan’, presumably to underline this to be a nation of Hindus. One more sought to ban religious conversions in India, and yet another to secure a uniform civil code throughout India. Adityanath, with his agenda and history of aggressive minority-baiting, one that would teach them to submit to life as second-class citizens, was handpicked to lead a state which if independent would be the fifth largest in the world.

In this environment permissive of hate speech and violence, both the Muslim and the Dalit have been demonised as the cow-killing ‘other’, and vigilante attacks and extortion targeting have become commonplace across the land. The lynch mobbing of an ageing Muslim dairy farmer in Alwar, Rajasthan is only the latest of these outrages, followed predictably by denials and victim blaming by senior politicians and police officials. With bigotry sanctioned from the top, this placid pastoral animal is being used today to pit one Indian against another. Too much blood has flowed already.

Harsh Mander is author, Looking Away: Inequality, Prejudice and Indifference in New India. The views expressed are personal.