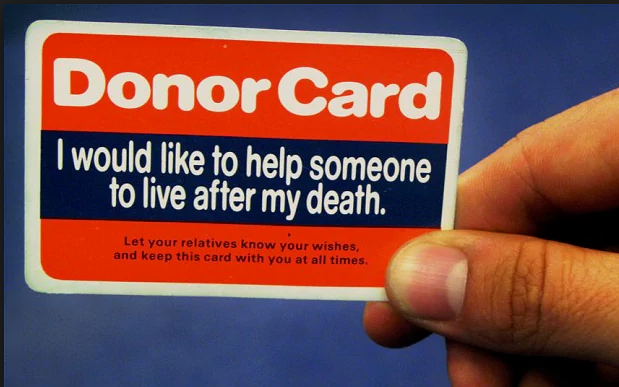 Why?  They don’t belong to you any way is the new court ruling!

None of us is permanent and absolute owners even of our own bodies and its parts, is the substance of Attorney General Mukul Rohatgi’s ruling, given in the brief Indian Express editorial given below with the heading ‘Body snatching.’

The phrase ‘Body snatching’ came into vogue in the 18th century when intrepid anatomists in England determined to educate their students would hire a body snatcher who would either dig up a buried body from any cemetery for a pay or procure one through covert means.

As for the right of a person on his own body read the editorial below: ‘Body snatching’. Recall also the famous saying: “Homo humus, fama fumus, finis chinis” (Man is mud, fame is shortlived like smoke and end ashes) And do you, still want to immortalize your ashes in a Taj Mahal? Nor do we have permanent city or residence here below (Non habemus hic manentem civitatem,) as we are all pilgrims on the march.

What a powerful thought from a new angle and perspective on organ and body donation! We all thought of our bodies as the most inseparable personal property on which no one else has a right even to touch. But what indeed is the truth, the harsh ground reality?

Our bodies are not something either created or produced by us! They are something freely and lovingly donated by our parents and therefore something to be given away freely, at least when we have no need of them anymore in this world, not something to be preserved and demonstrated to the whole world covered and immortalized in marble, like  Taj Mahal. What do we do then with our ‘sell by date’ products displayed on the shelves in our big bazzars?

The scriptures of great world religions have been telling us all along this elementary truth. The essence of Bhagavad Gita tell us, ‘all what we posses today belonged to someone else yesterday and will belong to some one else tomorrow’. Bible asks us: “what have you which you have not received and if you have received, why do you glory, as if you have not received?” Is it not this thought that should prompt us readily to give away our outdated belongings — clothes and personal items – to our neighbours, who can use them?

The great conqueror Alexander ordered to leave his both hands hanging empty on both sides of his coffin as an immortal message that we don’t take with us anything that belonged to us to the next world. The great truth is, we know next to nothing about what happens to us – our bodies and souls  — after death. As for bodies we know it disintegrates and becomes one with the soil. As for souls we have any number of spiritual theological dreams still to be scientifically proven.

But we are absolutely certain about one thing. We can save millions of lives if we donate our organs and bodies after our death to those who can use them to survive from a deadly ilness to live for many more years. What prevents many of us from doing this is sheer selfishness, vain glory and incorrigible ignorance. It is this ignorance that the Indian Express editorial tries to eliminate or minimize.

Thanks to similar effort by well-meaning people, more and more people in India are coming forward to donate their organs and bodies after death. Nay more! Many more are now on record for donating their kidneys already when they are alive, since one can survive with one Kidney functioning properly. Among such people are living Bishops and dead chief ministers. Recall the example of West Bengal CM  Jyoti Basu who donated his body for anatomy study to a medical college.

Some ten years ago even this scribe donated his body to the Amrutha Institute of Social Sciences (Hospital) Kochi after writing a two-part article on the glories of donating one’s organs and/or body, but still waiting with bated breath humbly, hopefully, anxiously, patiently and prayerfully for that day to dawn in God’s own good time.

The great truth to remember is that we humans belong to one great family. Equally we are all engaged in a relay race, willy-nilly! And as dutiful participants in this race we should readily hand over the baton of life to the next in the waiting line. Is it not the harsh and humbling truth? Still why are too many people reluctant or even opposed to body and organ donation?

Unfortunately number of those who refuse  to donate their squeezed lemon (body) far outstrip the few who come forward to donate voluntarily. The main culprit of course is ignorance. What should not be tolerated is culpabale ignorance on the part of many who claim to be enlightened leaders in both politics and religions. ‘Our thanks’ to Indian Express editorial for highlighting this point for the benefit of the common people in need. james kottoor, editor, CCV.

The government has ended a long political debate. Your body isn’t yours, so there.

Attorney General Mukul Rohatgi has provided a powerful incentive to organ donation by submitting in court that you do not have absolute ownership over your body and its parts.

Why hang on to your kidneys now when you know that you will have to surrender them later anyway? As with land, so with your biological real estate — it all belongs to the government.

You have a 99 -year lease on both (you don’t seriously expect to live beyond 99, do you?), and the government has the right to suspend the contract prematurely. This may be less traumatic than losing your ancestral property, but its implications are sobering in a digital culture where personal data is unsecured. It appears that the details of 13.5 crore Indians have been publicly exposed on government websites.

Nevertheless, the learned attorney general has dismissed concerns about privacy and bodily intrusion as “bogus” in the face of overarching claims of national security. He has argued that the government has the sovereign right to read our entrails. Indeed, once convinced that we do not have absolute autonomy over our body parts, one could easily suspect that the descending colon is up to something subversive. Let us not dismiss this as hypochondria. Is it not the spleen that urges terrorists to murderous excesses? Or is it the liver, which is the fountainhead of bile? The leeches of yore had a thing or two to say on the subject.

Why don’t we efficiently do what the government has done so bumblingly, and publish our data to the internet ourselves? Voice samples to Sound Cloud, and pictures of our eyes and fingertips to social media. Only desperate measures would end this controversy.