The 2017 Global Hunger Index released by the International Food Policy Research Institute (IFPRI) today labelled India's hunger levels "serious" and ranked the country 100, sandwiched between Djibouti and Rwanda and worse than North Korea ranked 93. Though the findings are based on 2015 data (as per experts on NDTV channel), they are really very alarming when India claims to be food-surplus and racing to a GDP Growth of 7.1% in 2016, one of the fastest in the world now. However, as per Business Today dated 11th October the International Monetary Fund (IMF) on Tuesday 10th October, slashed India's GDP growth forecast to 6.7 per cent for 2017 from 7.2 per cent predicted earlier.

The IFPRI Hunger Index clearly shows that judging a country's growth only by its GDP Growth is a fallacy.  Japan considers its Human Resource as its topmost asset. It's high time for our country's leaders,irrespective of their party colours, to emulate Japan, and increase allocation on Education and Healthcare, instead of ear-marking valuable funds on building of Ram statue at Saryu river at Ayodhya ostensibly to promote religious tourism or the world's tallest statue – Statue of Unity – a memorial to Sardar Vallabhbhai Patel.  Isaac Gomes, Asso. Editor, Church Citizens' Voice. An annual global assessment of hunger has ranked India 100 among 119 countries, marking a 55-point fall over the past three years and prompting nutrition analysts to highlight concerns that economic growth does not automatically guarantee food security.

India's position on the index — where countries are ranked on the basis of undernourishment, child mortality, child wasting and child stunting — has fallen from 55 among 76 countries in 2014 to 80 among 104 countries in 2015 and to 97 among 118 countries last year.

While the country has progressed on three of these four indicators over the past decade, the proportion of Indian children suffering from wasting related to undernourishment has actually increased from 20 per cent a decade ago to about 21 per cent over the past three years.

" Despite a massive scaleup of national nutrition- focused programmes, drought and structural deficiencies have left large numbers of poor in India at risk of malnourishment," Pramod Kumar Joshi, an agricultural economist and IFPRI South Asia director, said in a news release.

Structural deficiencies, Joshi said, implies that the government is allocating resources but programmes are poorly implemented.

The IFPRI has pointed out that only 9.6 per cent of children between six and 23 months of age in India receive adequate diet and only three other countries — Djibouti, Sri Lanka and South Sudan — show child wasting levels higher than 20 per cent.

India's index score is at the "high end of the serious category" and is a key factor that has pushed South Asia into the category of worst- performing regions on the index this year, the IFPRI said. India has the third worst hunger score in Asia, with only Afghanistan and Pakistan ranked worse.

"It is obvious that a high GDP (Gross Domestic Product growth) rate alone is no guarantee of food and nutrition security for India's vast majority," said Nivedita Varshneya, India director for Weltehungerhilfe, a German humanitarian agency which collaborates with IFPRI in assessing hunger. "Inequity in all its forms must be addressed now if we are to meet the sustainable development goals that include zero hunger for everyone by 2030," she said.

The index has cited India's gains on undernourishment, child stunting and child mortality.

The proportion of undernourished population in the country declined from 16.3 per cent about a decade ago to 14.5 per cent in the last three years. India's child mortality under five years of age dropped from 6.6 per cent to 4.8 per cent. 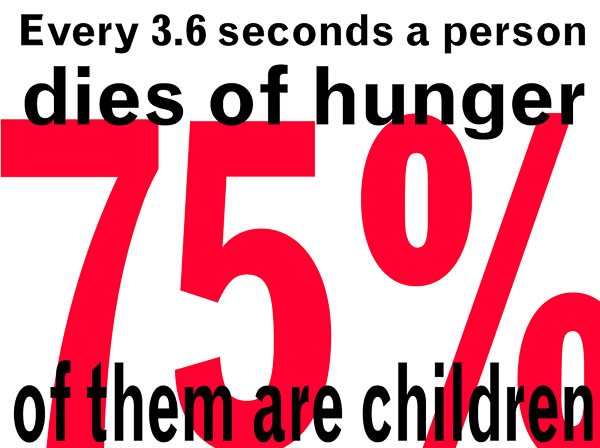 Nearly half of the 119 countries assessed this year have hunger levels labelled either serious, alarming or extremely alarming.

The Central African Republic is the only country with "extremely alarming" hunger with about 58 per cent of the population in a state of undernourishment over the past three years. The hunger levels in Chad, Liberia, Madagascar, Sierra Leone, Sudan and Zambia have been rated "alarming".