“Azaadi and Inquilab” are the war cries! Anti-CAA, NRC protests held in cities across U.S. 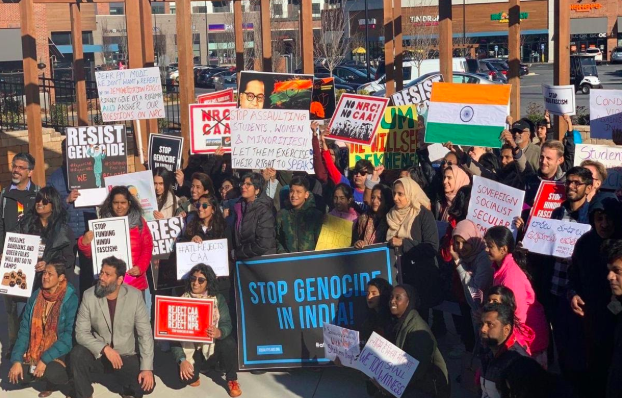 Note:  “Azaadi”, “Inquilab” are the two war cries heard everywhere in india and abroad when they  gather together to protest against CCA(Citizen amendment act), NRC (National registration of citizens) and NPR (National populations register).

Azaadi means freedom or independence, and Inquilab means revolution, both together meaning, we will go to any extend doing peaceful public protest to gain them. That was how we got our independence from British dictatorship and colonialist rule, from the time of Gandhiji. People in India and abroad are resorting to those twin techniques, to regain their freedom written down in the constitution, their only sacred book.

It is for this reason they often read the constitution in public forums and in Churches to remind the public that their freedoms achied through peaceful strugles are being taken away by a government led by Hindutva ideology.

Unity in diversity, our trade mark!

Unity in diversity is the defining mark of India, this largest democray in the world!  No force in the world, religious, economic, political or military should be allowed to tamper with it or deface it. That is the thrust of all demonstrations by Indians all across the US.

At least now, will  those at the helm of affairs in India rethink and do the necessary course correction or just go ahead led by the die hard Hintutva forces? That is the big question India faces today. james kottoor, editor ccv.

Please read below Kulkarni, on protests in US

Protesters condemned the rising fascism and police brutality in India and also demanded that the Government of India repeal the Citizenship Amendment Act (CAA) and withdraw the National Registry of Citizenship (NRC) and the National Population Register (NPR) to safeguard India’s Constitution and civil liberties.

Protesters chanted slogans, as they held up placards to register their dissent against what they say is an unconstitutional law, which paves the way for fast track citizenship for Hindus, Sikhs, Christians and Parsis from Bangladesh, Pakistan and Afghanistan. The law is deemed anti-secular because it leaves out Muslims.

Students at California’s Stanford University protest against the Citizenship Amendment Act and the National Registry of Citizens, Jan. 17.

Thenmozhi Soundararajan, executive director of Equality Labs told Religion News Service that the aim of the National Day of Action “is to challenge the slice of the Indian American community in the U.S. sympathetic to India’s right-wing politics.” She told RNS that “this protest is about the diaspora drawing a line in the sand.”

“A global resistance is rising to hold the Modi administration accountable for its gross violations of human rights and religious freedom, and for leading India down the path of fascism,” the Daily Caravan quoted Syed Ali, a member of Indian American Muslim Council (IAMC) as saying.

Seattle City Councilwoman Kshama Sawant, who attended the anti-CAA and NRC protest in Bellevue, Washington, told this correspondent that the progressive South Asian community in Seattle realizes the dangers of the deadly combination of the CAA and the NRC and how it will affect not only the 200 million Muslims, but also the marginalized and poor communities, as well as the oppressed, the women, the LGBTQ community and the poorest of the poor. “The CAA and the NRC have, in so many ways, been a watershed moment because it has struck a nerve with a section of the society.” She said that as a socialist, what is heartening to her is to see the kind of unity the law is building in her community. “People of all walks of life, some who are protesting for the first time in their lives, and coming together, in solidarity,” she said.

Sawant said that the Sept. 22 “Howdy Modi” event seemed to many Indian Americans to be a clear endorsement of Hindu nationalism by the Trump administration. In turn, the event also appeared to be an endorsement on the part of Indian Americans in attendance of the anti-black and anti-immigrant rhetoric Trump employs, activits said.

Members of the Assamese community in New York gather at Union Square in Manhattan, Jan. 19, to demonstrate against the CAA, demanding that the Indian government protects the rights of indigenous Assamese people.

Members of the Assamese community in New York gather at Union Square in Manhattan, Jan. 19, to demonstrate against the CAA, demanding that the Indian government protects the rights of indigenous Assamese people.

In New York, members of the Assamese diaspora and their allies gathered at Union Square Park to demonstrate against the CAA, demanding that the Indian government protects the indigenous rights of the Assamese people.

“CAA will be harmful for the unique ethnic and cultural diversity of Assam and the entire northeast, which we are so  proud of,” a press release issued by organizers of the New York protest, quoted Dr. Rifat Mannan, an assistant professor of Clinical Pathology and Laboratory Medicine at the University of Pennsylvania, as saying. “I hope our voices are heard.”

“We cannot let our homeland lose its beauty and culture of diversity,” said Malabika Brahma, a New Jersey resident. “We are proud of it. We will celebrate it and protect it.”

Connected by a narrow chicken neck corridor to Mainland India, Assam and its neighboring states share a porous border with Myanmar, Bhutan, Bangladesh, Nepal and China. Since independence, the region has provided sanctuary to millions of refugees and migrants, overwhelming the small indegenous populations, endangering their way of life and depleting land and natural resources.

The press release, citing Census data, said that the Assamese speaking population in the state declined from 60.88 percent in 1971 to 48.81 in 2001. The indigenous people are wary that welcoming more people from across the border would jeopardize their cultural and language identity.

Similar protests are planned at the Embassy of India in Washington, D.C., as well as in Indian missions and consulates across the U.S., on Jan. 26.