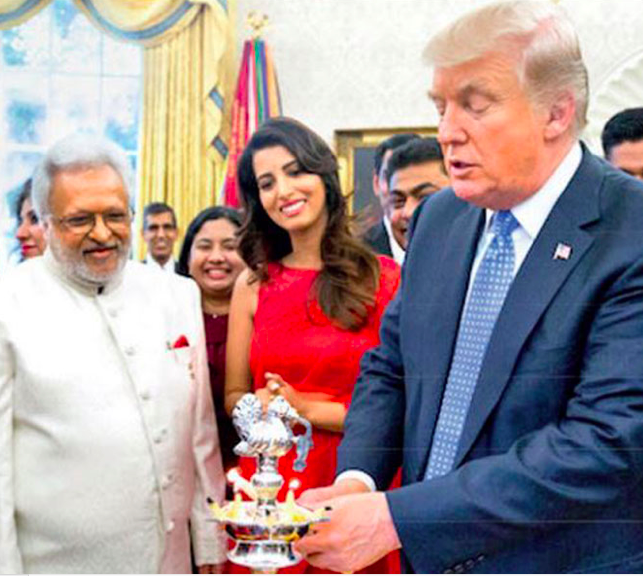 RHC: what is it? It is the Republican Hindu Coalition in US! This is the  highlight of the story below. RHC  numbers 4.2  million now in US. The credit for it goes mainly to Shalab  "Shalli" Kumar, born in Panjab, studied at Illinois Institute of Technology Chicago, grew up financially and built his political connections, shot to fame in 2013 when he took three members of the US congress to Gujarat to clean up Modi image and get his visa to US and declared his open support and of RHC for Trump’s campaign for presidency. Actually Kumar’s support for the US Rrepublican party  dates back to the Reagan administration. Kumar worked with the Reagan small business advisory council in the early eighties. RHC became close knit with the triumph of Trump for whose campaign he, worked as its organizer. As a fabulously rich Hindu American (Kumar prefers ‘Indian American)  he is reported to have donated to the tune of $ five million in addition to the whole-hearted support of the RHC. Thus he became an inner circle man in the White House and through him Modiji and his Hindu parivar.

CCV posted more than one article months back to give an idea of what paved the way to the Hug-diplomacy between  Trump and Modi. Already in July 2016, Kumar publicly supported Trump for president, openly backed Trump's stance on Pakistan and the plan to profile Muslims according to reports. No wonder why Trump has a soft corner for ‘brainy’ Indians whom Trump wants to stay in US like Kumar to build up American economy, and not return to India.

It only shows that it is the business spirit that ties them all  —  Trump, Kumar and Modi. Some one remarked sarcastically, "Americans have more dollars than brains" pointing to that fact, "what is in it for me" or ‘profit motive’ guides them all. Even with Modiji bonhomie blossomed with Trump, only after big business deals were concluded. But it is important for those with global vision, is to make sure that good relations between US and India are not going to be at the cost of Pakistan or Muslim community as a whole. Unity or keeping good relations with all should guide our international politics.

So let the lighting of Diwali in the White House, hasten what it is meant to convey, “The victory of the forces of Light over those of darkness, of collaboration with all and not divisions, of unity and peace and not discord and war between nations.” james kottoor, editor, ccv.

There are six Indians in immaculate sherwanis that the secret service is trying to clear through by matching their passports or drivers' licenses to the information they have on their computers. Four clear and two have problems. One of them is me. The problem is my passport has no last name. Even though I have met with candidate Trump, President-Elect Trump, and then President Trump, at least a dozen times, it's never been at the White House.)

Diwali at the White House was scheduled to begin at 3:15 pm. For 30 minutes four different White House officials tried to get me cleared, but these secret service guys refused to break the protocol no matter who the visitor. It is 3:00 PM now. Outside, I(Manasvi, the writer) was all smiles, but inside I was panicking at the thought of missing the event for which I had flown in from Los Angeles.

One senior official announced that the President was running 10 minutes late, so I breathe slightly easier. Finally, seeing no solution in sight, the Secret Service offer a way out – I could go in as long as I am escorted by an official all the time. Three members of our group of six had already gone in, and finally the rest of us dash to the Roosevelt room, right next to the Oval Office. Just in time at 3:30 pm.
The decor at the Roosevelt room was awesome with at least six marine officers to assist you as well as keep you in line. There were a total of 26 guests, most of them currently working for the Trump administration such as Nikki Haley, Seema Verma, Ajit Pai, Raj Shah, Vanilla Singh, along with six members of the Republican Hindu Coalition (RHC) that had played a major role in the election of President Trump. I am the RHC India Ambassador.
After a 10-minute wait in the Roosevelt room, all 26 of us line up in the Oval Office. President Trump walks in, and comes over to us, the Kumar family which includes my dad Shalabh "Shalli" Kumar, his son Vikram Aditya Kumar and of course me.
President Trump participates in a Diwali ceremonial lighting of the Diya at the White House. (Left) Shalabh Kumar and (centre) Manasvi Mamgain, TOI Miss India 2010
See the last time Mr Kumar met President Trump, his first question to him was "Where is your daughter?" They had really connected during the candlelight dinner on January 19, the day before the inauguration, with Trumps, including First Lady Melania and First daughter Ivanka, spending almost 45 minutes with the Kumars. During their chat, Mr Kumar corrected him on the number of Hindu Americans in the US being 4.2 million and not 2 million. "That is even better," Trump said. The President then proceeded to read his statement and light the diya with Nikki Haley and Seema Verma to his right and Shalabh Kumar and me to his left. After the lighting of the diya, President reminisced with the Kumars about the New Jersey rally he had attended last year with wall-to-wall attendance. President acknowledged the fact that the "Ab Ki Baar Trump Sarkar" was successful in causing a seismic Hindu American shift from 16% for Romney to 65% for Trump. Kumar suggested that we hold another rally, this time with 50,000 people to which President told the attendees: "If there is someone who can pull it off, it is him."

Shalabh went on to say: "Today, we celebrate Diwali to welcome home the greatest among men, Lord Rama after killing the evil king who was terrorizing India. Since then, for over 10,000 years, Hindus all over the world pray on this day of Diwali to bring back Ram Rajya, the governance of good. I had predicted right after your inauguration that you had the potential of bringing Ram Rajya to the United States of America. Despite some hurdles in the Congress, you have done a great job so far." The Oval Office erupted with applause.

Good going. Hindu Indians must control the affairs wherever there is opportunity be it here or abroad. Hindus of more than a billion strength, the third largest religion must play a active role to m… Read More Hindu Warriors.

While the other guests left the Oval Office, President asked the Kumar family to stay back. This probably messed up the schedule General John Kelly chalked out for him but he seemed cool with it.

The president and General Kelly spent the next 30 minutes talking to the Kumars on a whole host of subjects and getting feedback on how the Trump administration is doing from the perspective of the younger generation and US-India-Pakistan-China relations. (The writer is the RHC India Ambassador and winner of the Times of India Femina Miss India contest in 2010)  .