A stinking Congress must be buried soon! ‘Loyalists’ injurious to health 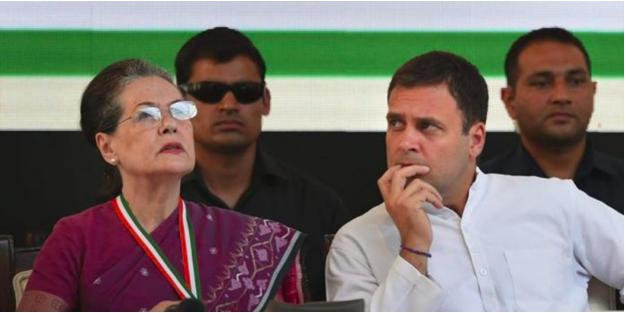 In a non-democratic family enterprise such as the Congress, even the appearance of rebellion is unthinkable. (Photo | PTI)

In principle this is accepted to be the best form of government! But is it practiced in any country in the world? None, not even in US its birth place! Is it an achievable goal? Possible, not probable! What is probable? A 50 to 75% democratic government! Then shouldn’t we first try for that?

India called the largest democracy has not reached even 50%, US may have! So the hue and cry in India for “Congress-mukth Bharath” by Modi government. On this both Modi and Gandiji are fully agreed, Gandhi for the reason, Congress has outlived its mission and is ireformable, as TJS our columnist sees it. Then why waste time in an exercise of futility?

More practical leaders like Sharad Pawar, Sangama, Mamata Banerjee and Jaganmohan Reddy of AP are leaders in their  own right  in their respective states. Then why don’t the 23 letter writers follow their example, to achieve something instead of wasting their available time for nothing?

What is more read also two reactions to TJS’ article also published in New Indian express, which questions the writer! It is here that we ask our readers to come forward with alternatives, if there are any. Otherwise we ourselves will be wasting our time, doing more harm than good. Act now before the darkness descends on us.

Aren’t you all at least certain by now that the Congress is dead and stinking, and so must be buried at the earliest for the sake of public good? Those who quit the congress long long ago like Sarad Powar, Sangama, Mamata, Jegaje- evan in AP are all doing fine in their states. So why can’t the 23 letter writers do the same?

“Congress in its present state and form… (with its front teeth and molars gone) has outlived its use… It won political freedom, but it has yet to win economic, social and moral freedom,” Gandi which it can’t, so Congress must be buried before it starts polluting the Indian subcontinent! james kottoor editor ccv.

In a non-democratic family enterprise such as the Congress, even the appearance of rebellion is unthinkable. That is why last month’s letter of dissent by 23 senior leaders triggered an earthquake in the party. The letter was in fact no rebellion. It raised a call for internal reform, a reasonable idea in a party that is older than Indian independence. It should have been doubly welcome because it came from respected veterans whose objective was to make the party stronger.

The ideas they put forward — a fulltime leadership available at national and Pradesh levels, transparent elections for block, pradesh and all-India committees — were constructive. But ‘loyalists’ saw the letter as criticism of the High Command. And the power of loyalists should never be underestimated. They are the nuts and bolts of Rule by High Command. That’s why we saw a seven-hour debate in the Working Committee ending with renewed affirmation of faith in Sonia and Rahul Gandhi. The non-democratic family enterprise character of the party thus reaffirmed, all was well. Given her background, Sonia probably suffers from an insecurity complex.

She wants her top position affirmed and reaffirmed so that she won’t have to worry about her personal incomprehension of India’s convoluted party politics. Once the Working Committee was all-in-all in the party. Today it is the High Command that calls the shots. And the High Command consists of the family and its loyalists. As for Rahul, nothing seems to give him sufficient confidence to take command de jure as well as de facto. Instead of deriving benefit from the Brave 23, mother and son went into gyrations that suggested activity when there was none. Loyalists are one hundred-percenters. Their allegiance is all-out and categorical. So the Gandhi loyalists stood firmly against “dissent”.

Kapil Sibal, a loyal Congress leader if ever there was one, put it plainly when he said that nominations could not be a substitute to elections. He drew attention to the party constitution which stipulated that the Working Committee should have 12 members who were elected to the AICC. But not one elected member is currently in the Committee; all are nominated.

Responding to the Brave 23’s letter, the AICC and Working Committee were reconstituted, but through nominations by the President, not elections. Some of the signatories did not find place in the new Committee. The message was clear: Leadership will be in the hands of a select few who will need no electoral approval.

There were reports that some of the Brave 23 and some from outside that group held a private meeting and surveyed the internal situation in the party. They were said to have hardened their position against leadership by nomination. But they are up against formidable forces. Remember the WikiLeak expose which quoted wellconnected Americans saying how “the Gandhi family has been secretive about who belongs to the inner circle” and how the inner circle “carefully controls her access to information and inoculates her from criticism, while her carefully scripted public appearances protect her from making gaffes or missteps.”

When Rahul held office in the AICC (2013 to 2019), his team included Mohan Gopal, Jairam Ramesh, Madhusudan Mistry, K Raju and Divya Spandana who were often at loggerheads with Sonia’s loyalists. That was irony of a revealing kind — Rahul loyalists being inimical to Sonia loyalists and vice-versa. These internal rivalries and clashing loyalties helped reduce the Congress to the status of a virtual non-entity. In the 2019 elections, the Rahul caucus expected to win not less than 164 seats in Parliament. It got 52, two seats short to have even the status of the official opposition.

Sibal felt angry enough to say that, if nominations are to replace elections, then it was best to re-write the party’s constitution. The loyalists pretended that they did not hear it. The bottomline is clear: There are Congress leaders whose eminence depends on patronage by the Gandhis and they put their self-interests above the interest of the party and the country. Mahatma Gandhi must have foreseen this. Hence his opinion, openly expressed, that the Congress must be disbanded.

He said: “India having attained political independence through means devised by the Congress, the Congress in its present shape and form, i.e., as a propaganda vehicle and parliamentary machine has outlived its use… The Congress has won political freedohm, but it has yet to win economic freedom, social and moral freedom.”Poor Gandi! Not in his wildest dream could he have imagined India coming under a-moral freedom.

Of course, the Gandhi family will be only too gland to accept your suggestion if it were under irresistible pressure to look for an outsider as the party chief. They know only too well that the new chief will not dare move a piece of furniture in the AICC office without a nod from the family. It is in the best interest of people like Antony who are in the fag end of their political careers that things remain as they are in the party. A “membership for life” in the Congress Working Committee allows them to control the state units of the party, whether in the matter of selection of candidates for assembly-parliament seats, choice of PCC and DCC chiefs or selection of chief ministers whatever may be the preference of state legislative parties.

Which state Congress leader or CM will ignore the wishes of someone who is seen sitting next to or exchange one or two words with Sonia or Rahul in the non-working CWC meetings? The present situation benefits Antony especially, because Kerala is the only state where the party is still strong as it is in alliance with the Muslim League in Malabar and Kerala Congress in central Travancore, though Antony, the leader of the “I am holier than my party” brigade in the Congress, should find it repugnant.

After every election Ms. Gandhi asks Antony to go into why the Congress fared miserably and suggest measures for setting things right. Every time, Antony submits a report blaming everybody except those responsible. But after the 2014 debacle, Antony, for a change, attributed the Congress’ poor showing to “the appeasement of minorities.”

As always, he was less than straight forward, for the only state where the party fared well in 2014 and 2019 was Kerala where this policy of appeasement (in the form of alliance with Muslim and Christian communal bodies) has been going on for some five decades. A M Pakkar Koya Kozhikode

Was socialism post independence good? How was the state of infrastructure under Congress regime? Almost every election manifesto of Congress pretty much had roti, kapda, Makaan or bijli, sadak Paani. So how have these things fared? How has Bharat fared? What are your thoughts on garibi hatao? State of defence? Endemic corruption? Quality of life? Reservation? Freebies, subsidies, loan waivers? Economic liberalisation in 1991? Appeasement of religious communities?

Manmohan Singh said a divisive statement- "Minorities have the first right to the nation's resources", what are the author's thoughts? How has the country fared under Congress in comparison to Asian tiger economies, Israel etc who pretty much started their scripts along with India and lately, China? State of public sector units? Indian railways in comparison to European, American, Australian, Japanese and Chinese railways? In the author's future columns I would like to know what he has to say about all these things.

A great idea to bury the Congress [though of course not its leadership while they are still in the world of the living].

Choose for the Congress the graveyard where lies buried the BJP, the TRSS and the parties based on th dynasty of caste, feudal rights, and the strength of cash