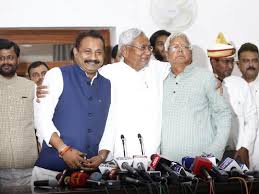 The clear mandate for the Grand Alliance of the Janata Dal (United), the Rashtriya Janata Dal and the Congress in             Bihar is not only a vote for social welfare and economic development, but also a vote against all forms of divisive politics of communal hate and religious intolerance. Between the Lok Sabha election of 2014 and this year’s Assembly election, politics in Bihar saw unprecedented churning, bringing together parties of different ideologies and social bases in the face of a rising tide of aggressive majoritarianism stirred up by the Bharatiya Janata Party. Indeed, for the BJP, its very success in last year’s Lok Sabha election in Bihar proved to be its undoing. As fringe elements allied to the party and within the Sangh Parivar misinterpreted the 2014 verdict as public endorsement of their hidden agenda, opposition parties realised that they stood no chance if they did not jointly resist this common threat.

As a matter of fact, the seeds of the BJP’s defeat in Bihar in 2015 were sown even before its spectacular victory in the 2014 Lok Sabha election. As Mr. Modi became the national face of the BJP in 2013, the prime mover of the JD(U), Chief Minister Nitish Kumar, was quick to recognise the social cost of his political alliance with the saffron party. After his attempt to emerge as the sole alternative to the BJP ended in failure, with the RJD and the Congress occupying the political space for a secular opposition, Mr. Kumar pieced together the Grand Alliance with his long-time political foes. Lalu Prasad, whom Mr. Kumar had pilloried for running a “jungle raj” in Bihar, thus became his principal ally against a marauding BJP, which was feeding into a highly divisive communal agenda. That Mr. Prasad had been disqualified from contesting elections following his conviction in a corruption case must have helped in settling the issue of the leadership of the Grand Alliance. Without standing on political ego or false prestige, the RJD chief seemed all too willing to forgive Mr. Kumar, and went to great lengths to accommodate him politically. In both vote share (18.4 per cent) and the number of seats (80), the RJD did better than the JD (U) (16.8 per cent and 71 seats), but Mr. Prasad had already made it clear before the vote count that Mr. Kumar would be the Chief Minister irrespective of the number of seats the RJD won. The efforts the two leaders put in to make the alliance work seem to have paid off in the end.

But it was not just the electoral arithmetic that worked against the BJP. In the months since the Lok Sabha election, the party pushed the Hindutva agenda very hard even while paying lip service to growth and development. Eighteen months is too long a period to not deliver on the promise of ‘vikas’, or development, which was meant to translate into jobs and raise standards of living for the people. To make matters worse, the Hindutva agenda seemed as if it were designed to divert public attention from livelihood concerns. That much of the campaign in Bihar was taken up by issues such as cattle slaughter would not have gone down well with a vast majority of the voters, who would have expected the BJP to come up with some ideas on bettering the achievements of Mr. Kumar as Chief Minister. Instead, the party seemed to confirm Mr. Kumar’s assessment of it being socially reactionary and divisive. Statements of the Rashtriya Swayamsevak Sangh chief Mohan Bhagwat calling for a review of the reservation policy providing for quotas in education and employment also worked against the BJP.

Mr. Kumar must now use the mandate to scale up his vision for Bihar and build on the efforts to improve governance. A lot was done in the last ten years to alter Bihar’s image as one of the most backward States in the country, but he needs to do more. For a start, he could hold Mr. Modi to his promise on providing a Rs.1.25 lakh crore package to Bihar. But most importantly, the new government in Bihar will need to counter the socially disruptive agenda of Hindutva elements, who are just as dangerous whether in or out of power. After all, the vote is for a pluralist vision of India, for an idea of Bihar that is both inclusive and progressive.

The setback in Bihar should lead to some serious introspection by the BJP’s top leaders, including Prime Minister Modi and his Cabinet colleagues. The party always seems to be under the compulsion to cater to its core constituency of hard-line Hindutva elements, although it cannot possibly expand its base without presenting itself as the agent of economic growth and social progress. There is no way the BJP can ride both horses at the same time. Indeed, the Hindutva agenda is in direct conflict with the economic agenda. Sooner or later, the core will have to yield to the pressures from the crust. Else, not only will the Grand Alliance’s success be replicated by other players in other States — but, more crucially, India will suffer severe damage to its social and democratic fabric.