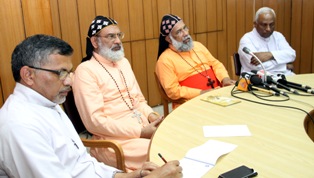 New Delhi(Matters India): The Catholic diocese with the largest geographical area in the world will be erected in India on Friday.

Cardinal Baselios Cleemis, head of the Syro-Malankara Church, will inaugurate Gurgaon diocese and install Mar Jacob Barnabas as its first bishop in the presence of political and Church leaders and thousands of faithful at Neb Sarai, a South Delhi suburb.

The diocese spreads over 22 states in India’s north, east and northeastern regions.

Gurgaon will be the ninth diocese of Syro-Malankara Church and 170th in the Indian Catholic Church comprising also Latin and Syro Malabar rites, Cardinal Cleemis told a press conference Thursday at the headquarters of the Catholic Bishops’ Conference of India.

Federal Defense Minister Manohar Parrikar and Delhi Chief Minister Arvind Kejriwal are among the dignitaries expected at the public meeting to be held immediately after the solemn Mass in the morning. Apostolic Nuncio Archbishop Salvatore Pennacchio, Archbishops Anil Couto of Delhi and Kuriakose Bharanikulangara of Faridabad would also attend the ceremonies, a press release said.

The diocese has been making a mark in the social and charity sectors with several outreach programs, said Fr Varghese Mattamana, spokesperson for the Church.

The most successful program is its Food for Hungry program where they supply food packets to some 600 vagabonds found on the Delhi streets. Started with 30 packets a few years ago, the program has reached more than 100,000 people, Fr Mattamana said.