Why the Summit Fell Flat, and What Might Happen Next 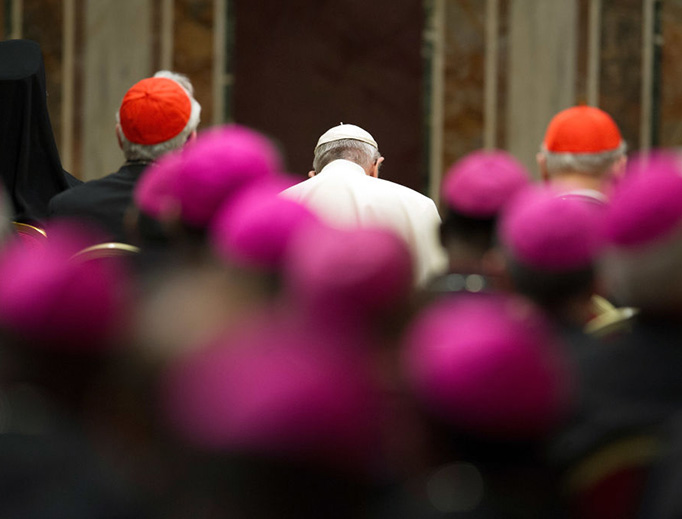 VATICAN CITY, VATICAN - FEBRUARY 23: Pope Francis, flanked by cardinals and bishops, attends a Penitential Liturgy at the Regia Hall at the end of 'The Protection Of Minors In The Church' meeting on February 23, 2019 in Vatican City, Vatican. The papal summit 'Protection of Minors in the Church', held in the Vatican from 21 to 24 February, is the first meeting to involve all the Presidents of Episcopal Conferences and those responsible for religious orders worldwide. (Photo by Vatican Pool/Getty Images)

The Pope’s closing address for the Vatican sex abuse summit Feb. 21-24 was filled with statistics on the overall phenomenon of all child sexual abuse worldwide, most of which occurs within the context of the family, Pope Francis pointed out.

“Today we find ourselves before a manifestation of brazen, aggressive and destructive evil,” he said. “We need to take up the spiritual means that the Lord himself teaches us: humiliation, self-accusation, prayer and penance. This is the only way to overcome the spirit of evil. It is how Jesus himself overcame it.”

Building upon the World Health Organization’s “Seven Strategies for Ending Violence against Children,” the pope presented eight guidelines to aid the Church in “developing her legislation” on the issues.

The eight guidelines can be summarized as follows:

1. A “change of mentality” to focus on protecting children rather than “protecting the institution.”
2. A recognition of the “impeccable seriousness” of these “sins and crimes of consecrated persons.”
3. A genuine purification beginning with “self-accusation.”
4. Positive formation of candidates for the priesthood in the virtue of chastity.
5. Strengthening and reviewing of guidelines by episcopal conferences, reaffirming the need for “rules.”
6. The accompaniment of those who have been abused with an emphasis on listening.
7. Ensure that seminarians and clergy are not enslaved to an addiction to pornography.
8. Combat sexual tourism around the world.

Twice in his speech, the Pope highlighted “the scourge of pornography” and its influence on violence against minors.
However, many complained that the Summit did not take into account sexual abuse of women particularly subordinates (nuns and other church workers). In the current article published in National Catholic Register on 25th February 2019, Msgr. Charles Pope expresses his points of view. Isaac Gomes, Asso. Editor Church Citizens Voice.
The refusal to consider vulnerable adults and homosexuality in the discussion is a severe blow to credibility.
Msgr. Charles Pope

I respectfully offer here a brief reflection on the recent summit in Rome on sexual abuse by clergy (“The Protection of Minors in the Church”). To be clear, I was not in attendance nor was I able to follow the proceedings closely, even to the extent that they were publicly accessible. I welcome corrections and comments on my impressions.

That said, count me among those who are disappointed in the content and conclusions of the summit. Earlier in February I wrote of my hopes for the gathering, describing what I thought was necessary for credibility to be restored to the Church. I highlighted three things I deemed essential:

Of the three areas, only the last was addressed at all.

Regarding the first point, the summit’s very title (“The Protection of Minors in the Church”) and agenda limited the focus to the sexual abuse of minors. Not only is the abuse of minors egregious, it is criminal, and must be met with the strongest penalties. However, as the Theodore McCarrick case illustrates, the problem is more widespread than the abuse of minors. His abuse of at least two underage boys was preceded by many complaints. Even more widespread were the rumors of his sexual harassment of seminarians and younger priests. As has been well documented, even though many prelates in this country and in Rome knew of his behavior, there was little correction. Further, the restrictions that were finally placed upon him were largely ignored. His status as an active player in crucial Church matters, including international diplomacy and the advancement of men in the episcopacy, was effectively restored.

A tremendous opportunity to restore credibility to the Church was missed in failing to review and criticize the structures and decisions that allowed Theodore McCarrick to advance, failing to identify and call to account those responsible for it, and failing to discuss specific credible charges related to the overall sexual abuse crisis in any substantial way.

Regarding the second point, the silence—even outright refusal to discuss—the clear connection between the sexual abuse crisis and active homosexuality in the priesthood is a severe blow to credibility. That Cardinal Blase Cupich, a key organizer of the summit, denies a causal relationship between homosexual clergy and the fact that more than 80 percent of the victims have been post-pubescent males is not credible to most Catholics. There is simply no logical basis for such a claim, except perhaps among LBGTQ ideologues.

While this should not be used to rationalize the demonization of all people suffering from same-sex attraction, neither should we miss the opportunity to assess the data honestly and develop sane policies in response. In less politically-charged moments, Pope Francis has said as much. A summit purporting to address the sexual abuse of minors that ignores the high correlation between homosexual attraction and sexual abuse by clergy has no more credibility than a summit on lung cancer that ignores the link to smoking. Not only does this glaring omission strain the credibility of the conference, it makes its deliberations and conclusions seem largely irrelevant.

It is only on the final point (a way forward to ensuring greater accountability among the bishops) that I see something substantial. Cardinal Cupich, in his address to the attendees, set forth a concrete procedure for the investigation of charges against bishops. The proposal involves a more local system that uses metropolitans (regional archbishops) to oversee the bishops within their purview. These metropolitans would collaborate with laity and other clergy to establish review boards; this is similar to the system already in use in the United States for investigating charges against priests.

I am not a canon lawyer and leave that sort of commentary to others more qualified than I, but it seems to me that the proposal has several good points.

First, it would restore more local accountability to bishops. Second, it would replace the current system — in which every bishop who is the ordinary of a diocese answers directly to the pope — which has proved unwieldy. Third, it would respect the divine constitution of the Church as hierarchal while also including the lay faithful for the sake of transparency. If this proposed procedure can be implemented and made accessible, it will improve the accountability of bishops and permit the faithful an opportunity to air their concerns. It remains to be seen how well the system will work and how faithfully it will be implemented, but it is the one substantial result to emerge from the summit.

While not surprised at the outcome of the summit, I am disappointed. It hardly merited the intervention of the Pope and Rome that suppressed the votes and actions of the U.S. bishops on this topic at their meeting in November. The Catholic faithful are justified in being dismayed at the lackluster results coming from this much-trumpeted gathering.

In the days and weeks to come, we will see whether there will be a fiery response from the faithful or, as some Church leaders seem to hope, the storm just blows over. I would ask any Church leader who is so hoping to ponder the sound of church doors and consider the likelihood that they will be opening more as people exit than as they enter. Lying low and waiting for the storm to pass ignores the damage it leaves behind — the victims, to be sure, but also a dispirited laity who no longer find credibility in many of their leaders.

Simply advising God’s people not to leave Jesus just because of a few Judases does not remove the obligation of us who lead the Church to preach the truth boldly, refute error, and discipline those who dissent or stubbornly persist in sin. God will hold us accountable one day for the ministry He has given us. Collectively, we clergy have too often failed God’s people. We’ve put them in a very difficult position. It is a tribute to many of them that they have persevered for so long. They have learned to look beyond our human faults and still find Christ—but we shouldn’t make it so hard for them to do so.

Help us, Lord. Save us. Have mercy on us, and keep us all by your grace!

Msgr. Charles Pope is currently a dean and pastor in the Archdiocese of Washington, DC, where he has served on the Priest Council, the College of Consultors, and the Priest Personnel Board. Along with publishing a daily blog at the Archdiocese of Washington website, he has written in pastoral journals, conducted numerous retreats for priests and lay faithful, and has also conducted weekly Bible studies in the U.S. Congress and the White House. He was named a Monsignor in 2005.