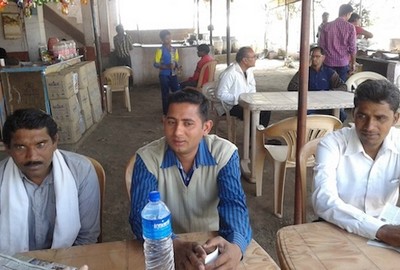 Hindu group accuses them of engaging in conversion activities.

Julwania: (UCAN) A village council in central India has fined four people for practicing Christianity and is closely watching them to prevent them continuing to do so.
The Dahar village council in Dhar district of Madhya Pradesh, fined the four 5,000 rupees (US$75) each, Shankar Singh, one of those fined told ucanews.com Feb 4.
The punishment on Jan. 19 came five days after police arrested and later released 12 people who had gathered at Singh's house.
The arrests followed accusations by a Hindu group that the people at the gathering were attempting to convert to Christianity.
Members of the Hindu group surrounded the house and called police, Singh said.
"We are under tremendous pressure to give up our faith in Christ," the 40-year-old told ucanews.com, adding that he had been prevented from leaving the village for the past two weeks.
He and the other three denied allegations they had converted to Christianity or indulged in any conversion activity.
"I am a member of the Bhilala tribe and continue to be in it," Singh said.
"I'm simply happy to attend Christian meetings and prayers, which have helped me overcome my financial worries, alcoholism, unhappiness and other negativities in my life."
The state, run by pro-Hindu Bharatiya Janata Party, has an anti-conversion law that criminalizes conversion if done without permission from government authorities. Fines and jail terms are stipulated for those involved in "fraudulent" and "forced" conversion and for "alluring" people to change their religion.

Singh recounted that for more than two weeks he has been closely watched by a self-appointed "vigilance team" and that he and the other people fined were "prevented from leaving the village."
The village of some 2,000 people has only four people attending Christian prayers, the rest follow tribal traditions, Singh said.
Jurla Bhai, 36, who also was fined, said the council threatened "to expell us from the village after accusing us of converting to Christianity and going against local traditions."

Village headman Mukud Randa confirmed the imposition of the fines.
They were fined for "breaching peace and harmony" in the village and "picking arguments with their own family members," he said.
In breaching harmony, "they were refusing to offer prayers and sacrifices to their goddesses and eat food offered in our worship," Randa said.
"This led to family discord and the fine was to discipline them and to keep the community together," he said.
Those wanting to follow Christianity are facing a "hostile situation," according to Jagdish Mehara, a local minister, who was among the 12 arrested, told ucanews.com
Christians have been opposing the state's anti-conversion laws on the grounds that they violate religious freedom as enshrined in the Indian Constitution.
Source: UCAN