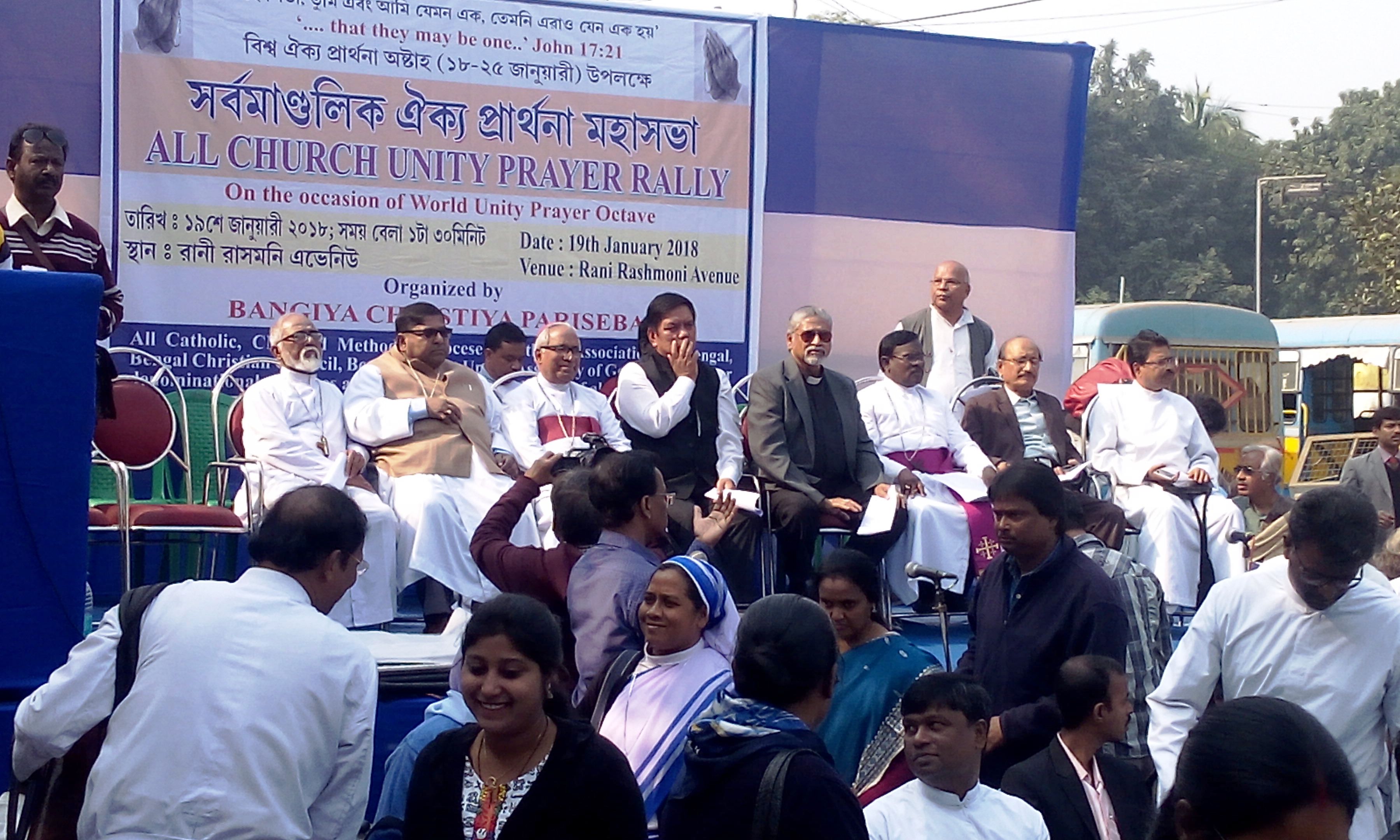 The Rally was part of the Unity Octave week for the Unity of churches of all denominations. This event took place after the historic Ecumenical Symposium on Revisiting the Reformation held at St Xavier’s College Kolkata on 31 October 2017. The audience on that day would recall what the then College principal, Fr Felix Raj SJ, in his welcome address had said: “Today is an historic day. For it is the first ecumenical gathering at St Xavier’s College. This symposium on unification of the Churches is very significant as, “what unites us in Christ is greater than what divides us.”

It is in continuation of the spirit of the above historic symposium on unification, the Unity Octave week (18-25 January) is being observed in Kolkata and other places of West Bengal including Darjeeling, Siliguri, Jalpaiguri. The All-Church Prayer Rally was part of the Unity Octave Week.

The backdrop to the Unity Octave week is Christusfest (an ecumenical celebration of Christ) held in the churches of Germany. The Reformation was the occasion of a renewed focus on salvation by grace through faith in Jesus Christ. This worship openly confesses and asks forgiveness for the sins of division which followed the Reformation. The service  celebrates Christ and his act of reconciliation, which moves the hearts of divided Christians to become ambassadors for Christ as ministers of reconciliation.

The 2000-strong Rally began from St Paul’s Cathedral at 1300 hours amid chanting of psalms and songs by the devotees who had gathered in Jesus’ name in praise of God’s wondrous deeds.

Bishop Salvadore Lobo, Bishop of Bariupur Diocese said the opening prayer. He thanked the Lord for uniting Christians and prayed that 2018 will unite us all as Christ was united with His Father and His Father in Him. In keeping with the theme of the Rally “That they may be one” (John 17:21-23), he quoted from the passage “that all of them may be one, Father, just as you are in me and I am in you. May they also be in us so that the world may believe that you have sent me.  I have given them the glory that you gave me, that they may be one as we are one — I in them and you in me — so that they may be brought to complete unity. Then the world will know that you sent me and have loved them even as you have loved me.” He prayed that the Almighty may send His Holy Spirit on us so that Christians of all denominations by stressing more on their commonalities than their differences, may unite.  He beseeched God for protection of all Christians so that they may glorify His name by living in faith, unity and in service to humanity.

BCP State President, Stephen Samir Lahiri, welcomed all Bishops, priests, pastors, religious and the faithful who had turned up at the Rally. He referred to the passage John 17:21-23 and hoped that through prayers, good sense would prevail especially on those who think Christ is irrelevant today.

Herod Mullick, State Working President BCP said that BCP had received a number of congratulatory messages from West Bengal's Chief Minister Ms Mamata Banerjee, Kabir Suman and All India Muslim Council.  He read out the Chief Minister’s message congratulating BCP for organising the Rally for Peace, Tolerance and Unity. He feared the very existence of civilisation was at stake because of increasing intolerance in many parts of the world and felt the need of the hour in India and the world was Tolerance.  He asked the faithful to pray for a change of hearts and said evil cannot win over good sense, brotherhood, and unity.

Archbishop Thomas D’Souza greeted all with “Jai Jishu”.  He said the purpose of the Rally was prayer. He reminded just as all Disciples were one, we should strain every nerve to be one with each other, just as Christ was one with us. He said that today was a beautiful day to bear witness to the fact that we are one; that we want to pray together and work together.  He said prayer was the greatest weapon Christians have for Jesus Christ taught us to pray and love one another as He loved us till he laid down His Life on the cross for our salvation. We Christians love peace and believe in brotherhood with all, by participating in service sectors viz. education, health, social welfare, and even care of the leper. He said St Teresa of Calcutta is a shining example of that faith and love. We are a peace-loving community and not a threat to anyone. For this those who are in our institutions feel safe.

Bishop Ashoke Biswas of Kolkata CNI said today’s Rally was of message of peace not only in West Bengal, but to all in India and the world. He said as God is one, so are we in one brotherhood and sisterhood.  In spite of India being a bouquet in which a myriad flowers of every shade, shape and fragrance bloom (varied religions, cultures and languages), in spirit and identity we are one nation. Our biggest identity is that we are all humans.  This realisation should ensure that there is no infighting, only peace and joy. Today the world is thirsty for peace. Peace brings prosperity.  Both peace and prosperity are possible only when we follow Christ’s only commandment: “Love one another as I have loved you.” Christ even laid down his life to prove this moot point of His teaching.

There were prayers by Bishop Sushil Tudu (in Hindi) and Bishop Cyprian Monis (in Santhali), readings from the Bible by Pastor Tapas Mondal and Bishop Isaac Mangalraj, interspersed with beautiful songs by choirs from different churches. St Anthony’s Choir, Keorapukur, was outstanding. Fr Dominc Gomes, Vicar General, Archdiocese of Calcutta, enlivened the choirs, by taking a lead role with his accordion.

The Rally ended with a prayer for sharing of bread by Rev. Kalyan Moitra, AG Church, vote of thanks by Tushar Bor-BCP State Working Secretary, and the Lord’s Prayer by all Bishops.

Fr Timir Sinha, Secretary Ecumenical Commission of the Archdiocese of Calcutta, deserves credit for marshalling all the constituents for the Unity Octave Week.

It would have been a true example of sharing if the breads blessed publicly were divided and distributed among the faithful instead of handing over packets only to designated groups at back-stage. The Bishops present should have ensured this and taken part in the sharing of the bread with all the gathered faithful, in keeping with what they sermonised at the Rally.