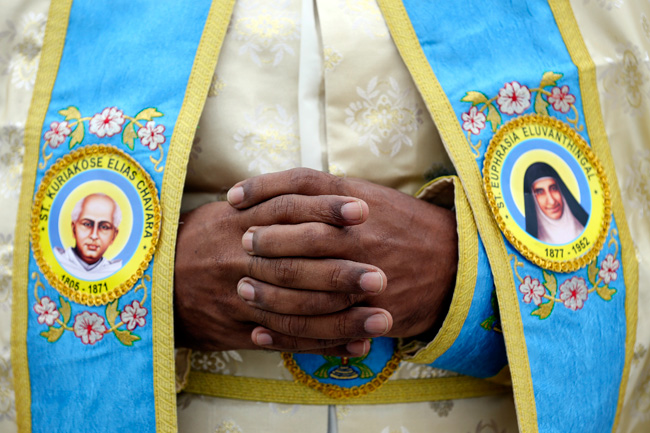 A Catholic priest and a nun from Kerala were conferred sainthood by Pope Francis at Vatican on Sunday.

Pope Francis pronounced them as saints at a special mass at St Peter’s Square at Vatican. The ceremony included a Latin hymn and a recommendation by a representative of the Congregation for the Saints.

To celebrate their sainthood, prayers and masses were held at churches across Kerala on Sunday. Christians constitute 23 percent of Kerala’s 33 million population and 50 percent of them are Catholics.

With today’s canonisation, the centuries-old Syro Malabar Church now has three Saints, the first being Sister Alphonsa, who was declared a saint in 2008. Sister Alphonsa became the first native Indian to be canonized and she too belonged to the Syro Malabar Catholic Church.

Father Kuriakose Chavara was ordained as a priest in 1829. He was beatified in 1986 along with Sister Alphonsa. He received the beatification after claims of several miracles by his followers.

Chavara was also a social reformer and believed that intellectual development and education of women was the first step towards overall social welfare.

He first introduced the system called “A school along with every church”, which was successful in making free education available for everyone.

Sister Euphrasia led a more secluded life, devoted to prayers. She was beatified in 2006. She was known as a ‘praying mother’ and a ‘saint among nuns’, who, according to followers, had several miracles to her credit.

Sister Euphrasia was declared a Servant of God in 1987, followed by Venerable July 5, 2002.

She was declared as “Blessed” Dec 3, 2006, by Cardinal Mar Varkey Vithayathil, the Major Archbishop of the Syro Malabar church.

To witness the canonisation ceremony, a 5,000-strong delegation of Kerala Catholic church had reached the Vatican. The delegation includes respected personalities from other religions.