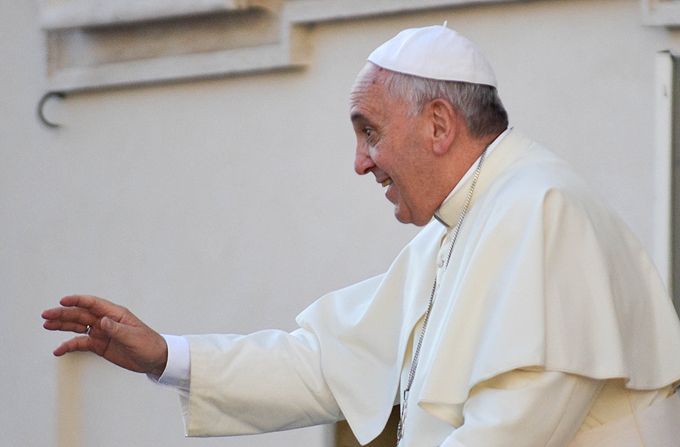 He warned against becoming too comfortable in failure, sin, or material goods, saying that the faithful should not flee from being consoled in Christ or fail to have confidence in God.
“When the spirit comes, consolation comes as well, and bears us to another state that we cannot control: this is precisely abandonment in the consolation of the Lord,” he stated.
Noting that the greatest consolation is found in mercy and forgiveness, the Pope pointed to Ezekiel 16 when the Lord says, “I will never abandon you; I will give you more; this will be my revenge: consolation and pardon.”
For this reason, Pope Francis said that repetition is good, in allowing God to console the soul time after time.
“I ask myself, what is the consolation of the Church?” the pontiff questioned.

“Just as an individual is consoled when he feels the mercy and forgiveness of the Lord, the Church rejoices and his happy when she goes out of herself,” he stated, comparing the Church to the shepherd who seeks lost sheep.
“The joy of going out to seek the brothers and sisters who are far off: this is the joy of the Church,” Pope Francis stated, noting that seeking the lost is when the Church becomes fruitful and like a mother.
When it does not seek the lost souls, he continued, the Church is “closed in on herself.”
Even if the Church is well organized, the Holy Father stated that if she does not seek the lost, “she lacks joy, she lacks peace, and so she becomes a disheartened Church, anxious, sad, a Church that seems more like a spinster than a mother.”
Using the shepherd imagery from the passage of Isaiah, the Pope compared the shepherd who feeds his flock to the joy of the Church, gathering the lost in fruitful abundance.

“May the Lord give us the grace of working, of being joyful Christians in the fruitfulness of Mother Church, and keep us from falling into the attitude of these sad Christians, impatient, disheartened, anxious, that have all the perfection in the Church, but do not have ‘children,’” the Holy Father said.
Ending his homily, Pope Francis spoke of the consolation that the Church offers her children through forgiveness.
“May the Lord console us with the consolation of a Mother Church that goes out of herself and consoles us with the consolation of the tenderness of Jesus and His mercy in the forgiveness of our sins.”