New Delhi: Prime Minister Narendra Modi and US President Barack Obama during their talks over the tea at Hyderabad House in New Delhi on Sunday. PTI Photo by Atul Yadav (PTI1_25_2015_000266B) *** Local Caption ***

Politics of embrace –yes or no?

(Note: There are three kinds of languages: spoken language, written langujage and body language. To which  will  you give more importance?  In political  circles, of course to the written language.  In diplomatic circles more to body language  and then to  spoken language.  Among stage performers of the film fraternity, only to the body language. If these three categories are of  any value, to which group does our PM belong naturally, instinctively? Definitely he is an excellent  actor on world stage as a public relation officer for the nation. He always did well to win friends and influence people first with  his body language and second with his eloquence. The writer cites six instances when politics of  embrace has  been a disaster. Also look at the expressions on the face of Obama and Modi in the picture.

Which is real and which is feigned or artificial?  All languages have their place. They speak of killing with kisses. In the present case who is killing or winning with embraces? The writer thinks that Modi is overdoing   it on world stage. What do you think? james kottoor, editor)

After Independence, the Congress was largely responsible for turning this great country into a gutter of corruption. The party paid the price for its misrule in the last general elections. Yet, there is no sign of the grand old party changing its ways despite its electoral reverses.

Disenchanted with the Congress, people reposed their faith in Narendra Modi and voted the Bharatiya Janata Party to power. After assuming office, Prime Minister Narendra Modi has been visiting many countries, all aimed at promoting the national interest. 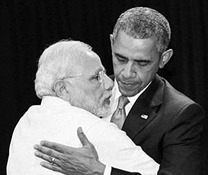 Yet, the manner in which he conducts himself while meeting heads of government abroad makes one wary of the dangers lying ahead. Particularly, the Prime Minister taking the initiative to embrace foreign leaders is not in good taste. The politics of the embrace has always been disastrous for the nation if one cared to take a look at history.

After Persian king Nadir Shah embraced Delhi ruler Bahadur Shah, we were deprived of the Kohinoor diamond. Mahatma Gandhi hugged Muhammad Ali Jinnah on many occasions and the nation was partitioned. Zamorin of Kozhikode welcomed Portuguese missionaries with an embrace and hundreds of Sivacharyas were burnt and the seeds of conversion were sown. Afzal Khan tried to hug Shivaji at the Pratapgarh Fort but Shivaji killed him and made a daring escape. Lord Mountbatten embraced Jawaharlal Nehru and Kashmir’s Gilgit area went to Pakistan. Former Prime Minister Atal Bihari Vajpayee hugged his Pakistan counterpart Nawaz Sharif at the Wagah border, and weeks later we had to fight the Kargil war. Modi made a detour to Lahore and embraced Sharif and the militant attack on the Pathankot airbase followed.

Since every nation pursues policies to further its interests, such embraces never help change anything on the ground. America has announced a deal to supply F-16 fighter jets to Pakistan close on the heels of Modi hugging America’s President Barack Obama before holding bilateral talks.

During state visits abroad, the Prime Minister should make others realise that India is a strong nation having dignity and commanding the respect of other nations. Sadly enough, no foreign dignitary has ever come forward to hug our Prime Minister. It is always Modi who makes the first move. It is time the Prime Minister realised that this politics of embrace could be detrimental to the nation.